The witching hour is upon us here at Boku Slots and its time to see if they can conjure up some riches for us all. Unearthed by the team at Microgaming, Witches Wealth promises to bring its players riches, just don’t eat any of the gingerbread house! 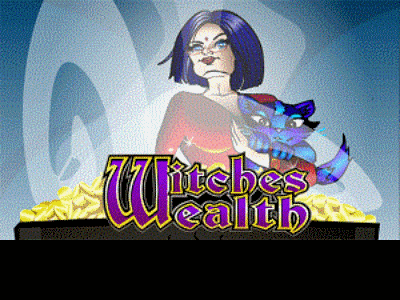 Play Witches Wealth on any of these top casino sites;

Witches Wealth is a 5-reel, 9 pay line slot that offers a mystical 95.5% RTP, for those brave enough to enter the witches lair. All the symbols are drawn from wiccan themes such as spell books, potions, and of course let’s not forget the witch’s familiars, cats, owls and bats. There is a very bewitching soundtrack playing in the background, but it got a bit much for us, so we switched off after a while.

Bet Amounts – Betting begins at 9p per spin if you have all lines in play and have all adjustable amounts set at the lowest. You can adjust the coin value, level and of course the lines in play to suit your needs before each spin. If you were to play with all lines and all adjustable items at the maximum, the most you are looking at is £45. Which when all is said and done isn’t as expensive as some games can be. Just be sure to have amended each section before hitting spin.

Wild Symbol – A very unscary witch named Serena is your wild symbol. She will substitute for all other symbols except the bonus and the scatter. Serena also awards the highest coin win of the game, so land 5 and you will receive 6000 coins into your balance.

Scatter Symbol – One of the witches’ familiars is your scatter, it takes the form of a bat. Whilst the scatter does not trigger any extra game, it does award scatter wins on top of your line wins.

Bonus Symbol – Mr Twinkles the blue cat is your bonus symbol, and he can lead you to one of two bonus games found within Witches Wealth. Landing 3 or more of the Mr Twinkles symbol will trigger one or the other of the bonus rounds, depending on how many symbols are on the reels.

Spinning Wand Bonus Feature – Land 3 or 4 Mr Twinkle symbols on an active pay line to trigger this feature. You will be asked to press start, once you do the wand will begin to spin. It will then either land on a prize, the bonus spot or on the return to game. If you land on the bonus spot you will be taken to the next stage of the feature.

Flying Rescue Bonus Feature – There are two ways to trigger this feature, by landing on the bonus spot in the spinning wand game or by landing 5 Mr Twinkle symbols on an active pay line. You will now see Serena fly across the reels to retrieve Mr Twinkles. However, she needs to avoid the objects falling from the top of the screen whilst she does. To win big you need to get as far as possible before being hit by one of the falling objects. You will receive a prize on entering the bonus, then a x2 multiplier when you reach the cat and a x3 multiplier if you make it home. Meaning this bonus whilst slow in playing is worth big money, whether you make it to one side or both.

Some aspects of this game were very promising to begin with, the double bonus feature being one. Unfortunately, the Flying Rescue Bonus was so slow, it was almost tedious to watch. The only thing that made it bearable was the huge wins to be gained whilst it was playing. There was scope to do so much more with this theme, but for what it is Witches Wealth is a relatively easy game to play. We can understand the draw, but if it wasn’t for the bigger wins within the feature this isn’t a game we would be back to play any time soon.