Anyone with connection to spirituality will know all about how beneficial having your chakras aligned can be! In this latest slot from Saucify, having a balanced chakra means matching chakras which do so much more for you than bring peace of mind. 7 Chakras is a slot game that is filled with spiritual themes including the seven chakra symbols. But will you find wealth and prosperity within the reels or are you just not aligned enough, get spinning to find out. 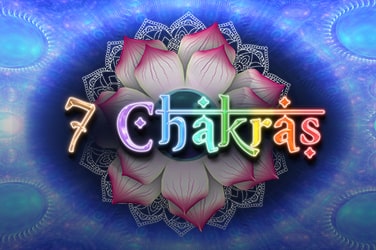 Play 7 Chakras on any of these top casino sites;

7 Chakras is a 5-reel, 49 pay line slot offering players an RTP of just 95.88%. The game itself is very relaxing which is unusual for a slot game and is filled with spiritual icons which gives the player a sense of peace.

There are 7 main symbols in the game which are depicted by the chakras. Starting from the highest to lowest we have the purple, blue, teal, green, yellow, orange and finally the red chakra symbol. As your reels spin there’s an almost serene tune playing in the background, that adds to the overwhelming feeling of relaxation whilst the game is in play. However, on top of that tune is some very unrelaxing sounds which occur when symbols drop into place or a win is formed. For this reason, we ended up switching off the sound as it was too off putting for us, but you may like it.

Bet Amounts – Betting on 7 Chakras begins at 1p per line in play and can be increased up to £1.25 per line in play. Meaning spins can vary in cost from 1p per spin up to £61.25 per spin. In order to find the most suitable bet amount for your needs, you can click into the bet screen. Here you can change the lines active, the coin value and the coin level. Once you reach your desired bet hit the X symbol to return to the game.

Wild Symbol – Your wild symbol is an image of someone sitting meditating, with each of the 7 Chakras emblazoned across the image. The wild will substitute for any other symbols in the game except the scatter and any wins formed with the wild will be awarded a x2 multiplier.

Scatter Symbol – A multicoloured emblem with a lotus flowers makes up your scatter symbol on 7 Chakras. This will land anywhere on the reels and three or more will trigger the two-part feature game. 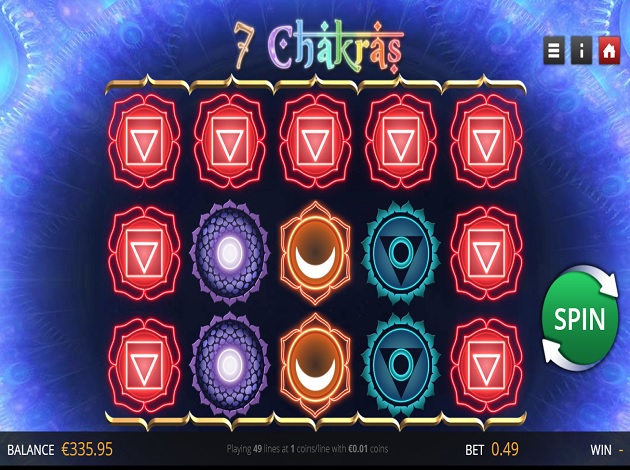 Stacked Wilds Feature – In 7 Chakras the wild is a double height symbol which is what makes it a stacked wild. With this feature in play you have a much bigger chance of creating wins. But, don’t forget they double any win they help to form too, so its win/win with the stacked wilds in this game.

Ascension Spins Feature – Once you have landed three or more of the lotus scatter symbol on the reels, you will enter the bonus spins. This is a two-part feature which begins by giving you a pick them style game, before entering the spins part.

Once you have been awarded your initial spins you will go to the ascension spins section. Here you will see a lotus flower spinning on the screen and it will have gems on its eight leaves. As you pick your first gem you will see it is red matching the lowest chakra, the gems will then change colour and move up through the chakra line. Each gem you pick will award extra spins or win multipliers to your bonus spins round. The game also explains what each chakra is as you move up through the 7 gems. Once you have picked all 7 chakra gems you will be awarded your final bonus spins total and win multiplier and be taken to your bonus spins round. Unfortunately, the feature cannot be retriggered as the scatter symbol is not available within the bonus spins feature.

7 Chakras is a great way to introduce the spiritual community to the online slot community. Saucify have done a fabulous job in creating a slot that combines the serenity of the chakra system and of course expanding your wealth and prosperity. The only downside for us was the music and sounds as it really let the game down, but it is literally the only bad thing we can say. Main game wins happen relatively often, but they can sometimes be interrupted with larger gaps of non-winning spins. If you can sustain these gaps, then the wins will begin to filter through again with more regularity. Our advice would be to bet mid to low range to ensure you have some decent game time. This doesn’t affect the triggering of the feature either, as those scatters land pretty much the same amount of times whether you are betting high or low.