Sherlock Holmes and his trusty sidekick Dr Watson are well known characters in the fictional world. Thanks to Rabcat Gaming you can now enter the London underworld and join their investigation in Sherlock of London. There is bound to be villains galore and of course riches, maybe even the crown jewels so what are we waiting for! 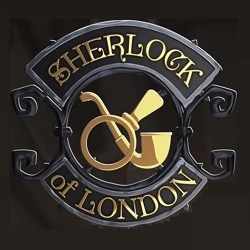 Play Sherlock of London on any of these top casino sites;

Sherlock of London is a 5-reel, 25 fixed pay line slot offering an RTP of 96.03% for players. Set in the misty alleys of London, the reels are plonked outside Baker Street the famous home of Sherlock and Watson. Symbols on the reels are a good mix of characters and card symbols, with a twist to tie them into the games theme. As you would expect from a slot based on the legend of Sherlock Holmes the soundtrack is just as legendary. Partnered with clicking sounds as the reels spin, there is an eerie tune playing and both work hand in hand to create a great atmosphere to the game.

Bet Amounts – Betting on Sherlock of London begins at 25p per spin and can be increased to £50 per spin. You will find your total bet and the bet level to the left of the spin button. Use the symbols on either side of the bet level to alter the bet amount showing above it. Once you are happy with your bet, hit the spin button to resume playing.

Wild Symbol – Sherlock Holmes peering through his magnifying glass is your wild symbol and he will substitute for all other symbols except the scatter. There is a second wild symbol available only in the bonus spins feature. It is depicted by Sherlocks trusted advisor, Dr Watson. The Dr Watson wild works in the same way as the Sherlock, substituting for all other symbols except the scatter.

Scatter Symbol – Your scatter symbol on Sherlock of London is the investigative duo Holmes and Watson, working together to bag you the bonus spins. The scatter will land anywhere on the reels and you need three or more to trigger the feature.

Other Symbols – Your higher paying symbols on Sherlock of London are the baker street sign, Dr Watson, Moriarty, Inspector Lestrade and a femme fatale. The lower value symbols are represented by the A, Q, K, J and 10 that have been designed to look as if they form part of the street or road signs. 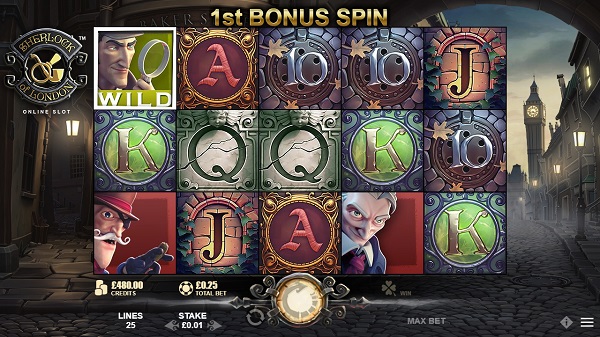 Wild Features – In addition to the bonus spins which will be explained below, there are also three extra features to watch out for.

Out of the three wild features on offer, only the wild bonus spins cannot be triggered during the bonus spins feature. However, the connecting wilds and the double wild win can both occur in the base game and the bonus feature.

Bonus Spins Feature – Land three or more of the Holmes and Watson scatter symbol anywhere on the reels and you will enter the bonus spins feature. You will be awarded 10 bonus spins to play through and an extra wild symbol as well in the form of Dr Watson.  The wild features mentioned above are active in the bonus spins but can only be triggered by the Sherlock wild symbol. However, the wild bonus spins feature is changed here to an expanding wild reel instead. Meaning that if you land either a Sherlock wild or a Dr Watson wild on any reels it will become an expanding wild. This means the wild symbol will expand up or down to turn the reel it has landed on totally wild. There is a catch here, if you land 2 wilds on one reel the expanding reels wont trigger.

Rabcat have developed a fabulous homage to the ongoing collection of Sherlock Holmes creations. The addition of the extra wild in the bonus spins feature certainly helped the wins along during the round. We aren’t quite sure why Rabcat Gaming decided to switch the extra spins option to an expanding wild reel, but it worked well despite the fact that extra spins are always a huge draw for players. We thoroughly enjoyed playing Sherlock of London, not just for the quirk of the theme but the features make for great gameplay. Couple that with the fast-paced wins landing in the base game and the cool graphics, and you will be left wondering why you haven’t played this sooner?