Dwarves are well known characters and are renowned for their mining capabilities. So, when you combine both you get a pretty interesting slot game. Join these dwarves as they mine for treasure in Yggdrasil Gaming’s Dwarf Mine and let’s see what we can win. 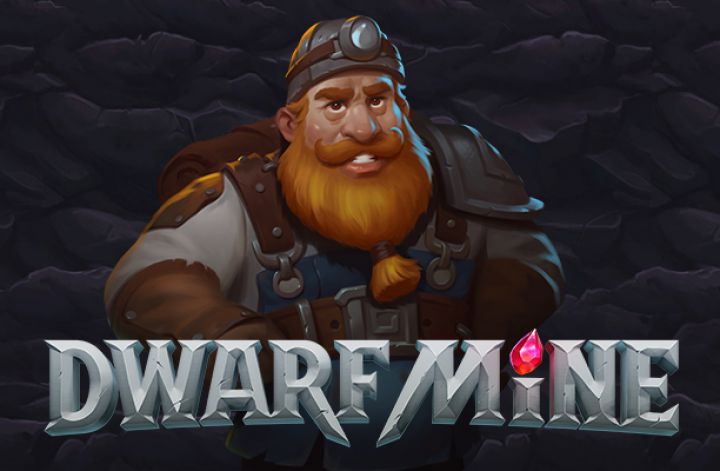 Play Dwarf Mine on any of these top casino sites;

Dwarf Mine is a 5-reel slot with 16,807 ways to win in play, instead of the usual pay line structure. It boasts an RTP of 96.8% and has two interesting features for players to enjoy. It is set under the ground in a mining facility operated by a dwarf stood to the right of the reels. Your reels are packed full of mining symbols, crystals and more. Higher paying symbols are the miner’s hat, pick axe, lantern and shovel with lower paying symbols being the heart, spade, club and diamond from playing cards. There are also a separate set of higher paying symbols which are only available within the feature and these are the four crystals in red, blue, yellow and green. There is quite an epic sounding track playing along as you spin the reels. A kind of heart pounding, something is going to happen here kind of music that really adds to the atmosphere of the game overall.

Bet Amounts – Betting on Dwarf Mine begins at 10p per spin and can be increased up to £125 per spin. To adjust the bet, you will see the coin value section at the lower left of the reels. Use the plus and minus symbols to adjust the coin value, which in turn adjusts the total bet found to the right of it. Once you are happy with the bet amount just hit spin to continue with your game.

Wild Symbol – Unfortunately there is no wild symbol in Dwarf Mine. But this doesn’t seem to have too negative an impact on the game once you start playing.

Scatter Symbol – As well as no wild symbol there is no scatter either. However, there is still a chance to trigger the bonus spins feature. But here in Dwarf Mine you have to land yourself some bonus symbols or crystals to trigger the feature.

Bonus Symbol – Luckily for players there is a bonus symbol in Dwarf Mine, and it plays a huge role in triggering both features too. It is depicted by a drill with the word bonus beneath it and can land only on reels 1, 3 and 5. 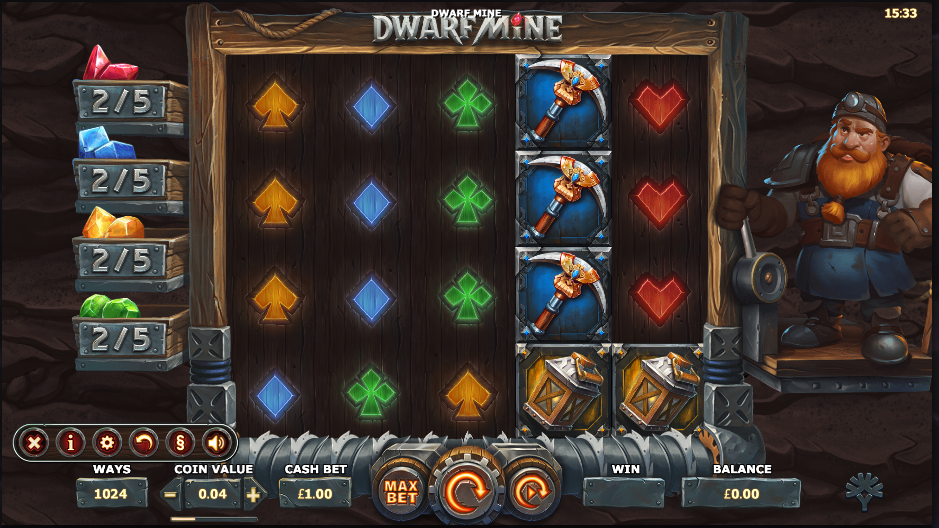 If, however you land three bonus symbols at once on the same spin, you will expand the reels to an extra 3 rows which is the maximum. You will also be awarded 10 bonus spins to play through on those expanded reels, giving you a total of 5 reels and 7 rows to play on during the round.

Crystal Collection Feature – At the left of the reels you will see some empty mining carts. As you spin the reels you will at some point collect coloured crystals and they will begin to fill the carts on the left. To find a crystal you need to land a bonus symbol, when the reels expand downwards this is when you may reveal a hidden crystal. Once you have uncovered x5 of either of the four coloured crystals, you will trigger the bonus spins feature.

With the Crystal Collection spins you are awarded x5 spins, but you also get extra symbols added to the reels matching the crystal that triggered the feature. New high paying symbols are added to this round as well with the red, blue, yellow and green crystals in play too. However, you will also be playing this bonus spins round on the fully expanded 5-reel, 7 row set, giving you better chances of landing some bigger wins.

Dwarf Mine isn’t as packed with features as most Yggdrasil Gaming slots usually are, but sometimes less is more. In the case of this game that certainly rings true as the game plays really well and is highly enjoyable. It does take some time to collect those crystals in the mining carts, but once you get into the spins it is worth the wait. To help things along Yggdrasil Gaming decided to award a number of crystals into the cart on first entering the game. You will get up to x3 crystals added to one or more of the carts, which goes a long way to helping things along. The expanding reels feature is actually really interesting and certainly helps to bring those main game wins for players too.