If you have a sweet tooth, then this next slot is going to be right up your street. Sweet Bonanza is the tasty offering from Pragmatic Play and is loosely based in some sort of candy land. There are lots of treats in store for anyone tempted by the delicious offerings on the reels. These include a fantastic bonus spins feature, an option to buy straight into the spins round and avalanche symbols. So much for you to get your teeth into, so get spinning those reels to see for yourself. 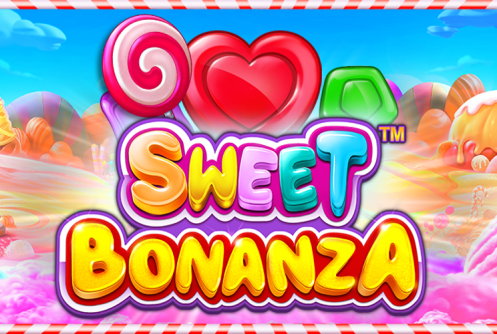 Play Sweet Bonanza on any of these top casino sites;

Sweet Bonanza is a 6-reel slot offering players an alternative way to win and a variable RTP of 96.48% to 96.51%. In Sweet Bonanza to land a win you simply need to have x8 or more matching symbols anywhere in view. They don’t need to be on a specific pay line or even on adjacent reels.

Your reels are set inside the candy filled dream world amidst clouds and a landscape that looks packed full of sugar. Symbols are all depicted by some form of sweet treat include lollipops, sweets and fruits. Higher paying symbols are the four coloured sweetie shapes, heart, square, hexagon and oblong. Lower paying symbols are the apple, plum, melon, grapes and bananas. As you spin the reels there is a sickly-sweet tune which works well with the game but was a little annoying after a while.

Bet Amounts – Betting on Sweet Bonanza begins at 20p per spin and can be increased to £100 per spin. This is the base bet options, but there is the chance to increase your bet and even buy into the feature which we will explain below. To amend your base bet, use the arrows above and below the spin button. This will take you to the bet screen where you can amend the bet level and coin value until you reach your desired bet amount.

Wild Symbol – Sweet Bonanza does not have a wild symbol in play. This has no impact on the game overall and in fact is barely noticed once you begin playing.

Scatter Symbol – There is a scatter symbol in play in Sweet Bonanza and it is depicted by a giant lollipop. Landing four or more of the lollipop scatter symbol will trigger the bonus spins for you. It is also your highest paying symbol in the game offering x3, x5 or x100 your bet amount as a win, for landing x4, x5 or x6 in a winning combination.

Avalanche Symbols – Always a welcome addition to any slot, the avalanche feature allows players to get more for their money. The way it works is simple, land a winning combination and once the win has been awarded those symbols will be removed from the reels. New symbols will now fall into their position completing any further wins. The process will continue until no new wins are made and the spins return to normal. You are not charged for the subsequent avalanches, meaning you can bag more than one win per paid spin; if you are lucky that is.

Buy in / Bet Double Feature – In a bid to help out the less patient of you, Pragmatic Play installed the buy in feature on Sweet Bonanza. This means for a higher stake you can instantly enter the bonus spins round, but it will cost you x100 your current stake to do so. If that works out too steep for you then there is the bet double feature. This doubles your chances of triggering the feature for an additional 25% on top of your stake. So, for example if you are betting at 20p, the bet double will cost you 25p. For this you get extra lollipop symbols added to the reels to enhance your chance of triggering the feature.

Bonus Spins Feature – Land yourself four or more of the lollipop scatter symbols on the reels, to trigger the bonus spins feature. You will now be allocated with x10 bonus spins to play through in the round. Also, in play during this feature is the bauble multiplier symbol. Every time it lands it will have a random win multiplier on it from x2 to x100. The bauble multiplier will only activate after you have completed at least x1 successful avalanche by forming a win. It will be awarded to the win once all consecutive avalanche wins have been accumulated.

The bonus spins feature can’t be retriggered unfortunately. But you will be awarded x5 extra spins for every x3 scatter symbols that land at once on the reels during the feature, extending the round for you a little bit.

Sweet Bonanza is a veritable smorgasbord of delights for players and we aren’t just talking about the sweets on show. It offers some great win potential in both the main game and the bonus spins feature. If you don’t want to wait for the feature to trigger you can buy in through one of the two options, which is an interesting idea. However, if you were to use either of these, we would advise ignoring the buy in and going for the bet double instead. It costs less and gives you extra scatter symbols in play. In the long term this is the more viable option, but if we were honest it’s not really needed. The bonus spins trigger fairly regularly thanks to the setup of the game and the fact that the scatters don’t need to be on a pay line!

May 9, 2018 Boku Slots Comments Off on Blazing Goddess