If you prefer your fruit served on a golden platter then you are going to love this next slot. Created by none other than NetEnt we have a luxurious slot named Grand Spinn! Here the fruit symbols are drawn to look quite realistic and laid out on various coloured leaf platters. But we aren’t here for the symbols we are here for the game and what it can offer, so let’s get spinning shall we and see what else Grand Spinn has to offer.

Play Grand Spinn on any of these top casino sites;

Grand Spinn is a 3-reel, 1 pay line slot offering players an RTP of 96.42% which is quite tasty. On entering the game you can see the reels look very art deco in design. Almost as if they have been pulled from a casino floor straight from the era itself. As for the reels they are set in gold, and you can see the three jackpot totals above the reels as you spin.

Symbols are a nice mix of fruits, bars and other retro themed icons, but beware the blank symbols. These blank symbols pay out nothing and have no function, other than frustrating the player of course! Higher value symbols are the triple 7’s, watermelon and Orange with lower value symbols being the plum, cherries and bar symbol! Whilst your reels spin there’s a piano lounge style music playing along, which fits perfectly with the theme. There is also a spinning and clicking noise as the reels fall into place, but it doesn’t overwhelm the music like some slot sounds.

Bet Amounts – Betting on Grand Spinn begins at just 2p per spin and can be increased up to the maximum of £200 per spin. In order to attain the bet you desire, you can adjust the bet level at the left of the spin button and the coin value which is to the right. Use the plus and minus symbols on either side to change your bet up and down until you reach the desired bet amount.

Wild Symbol – Your wild symbol on Grand Spinn is a red gemstone with the word wild written across the middle in gold. It will substitute for all other symbols within the game, except for the jackpot and arrow bonus symbols. But the gemstone wild also has another trick up its sleeve too. It forms part of the wild multiplier feature which you can read about below.

Bonus Symbols – The first bonus symbol is a red diamond and it plays a vital role in triggering one of the three jackpots on offer in Grand Spinn. In order to trigger the jackpot you need to land three diamond symbols on the pay line, or in the case of the nudge feature just above the pay line. Read on below to find out more. Your second bonus symbol is a gold arrow and it triggers the golden nudge feature.

Wild Multiplier Feature – When you land a wild symbol on either reel 1, 2 and/or 3, you will also be awarded a win multiplier for that win. 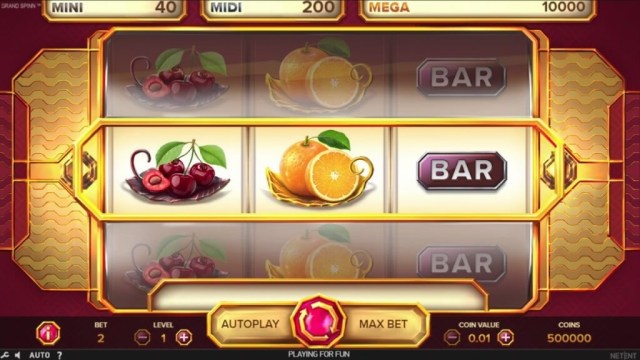 Nudge Feature – Every time you land a winning combination there is a chance the nudge feature will trigger. If there is a matching symbol on reel 1 to those forming the win, that reel will now nudge down and repeat the win pay out. This will continue if another matching symbol appears above reel 1, until a different symbol lands above the reel. The whole process will now move to reel 2 and then onto reel 3 in the same manner.

Golden Arrow Bonus Nudge Feature – If at any time during the nudge feature a golden arrow appears above the reel, you will activate this feature. Now the reel that the arrow is on will scroll back to the original symbol that formed part of the win. This also means the nudge feature will be reactivated, resulting in a whole new set of pay outs.

Diamond Jackpot feature – Land a red diamond on each of the reels to trigger the jackpot wins. There are three jackpots on offer the mini, midi and the super jackpot, and in order to win either of the jackpots you need three matching diamond symbols. If you land three non-matching symbols then you will still be awarded a jackpot prize, but it will always be the mini jackpot. If you land any three red diamond symbols above the pay line during the nudge feature, you will also be awarded with the lowest jackpot, the mini as well, whether the symbols match or not.

Grand Spinn offers an interesting twist on the usual slot game and NetEnt have really put some thought into it, that’s much is obvious. The fact the slot has just one pay line shouldn’t stop you giving it a spin or two, as it’s actually very enjoyable. Main game wins happen more often than you would think with just one pay line in play! Thanks to the wild multipliers they can be nice profitable wins too, especially if you land more than one wild at a time. Let’s not forget that epic nudge feature with its chance of repeating the nudges by landing the golden arrow. All in all, there are lots of win opportunities put in place on Grand Spinn, all you need to do is give it a whirl!