The title of this slot may seem familiar to you and that is because it is themed on a popular tv show. The 100,000 Pyramid slot is a bright, colourful and loud game, that aspires to be just as entertaining as the tv show itself. Whether or not IGT have managed to keep the same excitement levels the tv show garnered remains to be seen. But with just one feature to speak of we aren’t so sure about that, guess we will have to spin the reels and find out wont we? 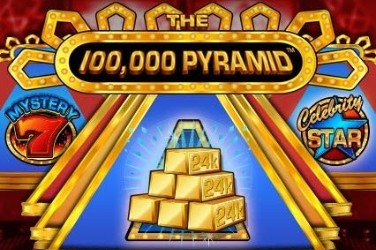 The reels are designed to look as if nestled inside the 100,000 Pyramid. Complete with studio lighting and symbols that relate to the gameshow’s prizes. Even the tune that plays along with the game seems remarkably tv show like in sound.

Bet Amounts – Betting begins at £2 per line in play and can be increased to £100 per line play. This means spins can cost from £2 per spin up to the maximum of £1500 per spin! To adjust your bet amount, you can change the lines you have activated and the bet per line too. These sections are both found to the left of the spin button. Use the arrows on either side of these sections until you reach the desired bet amount.

Wild Symbol – Your wild symbol is the 100,000 Pyramid game logo and it will substitute for all other symbols in the game except the scatter. The logo wild symbol is also the highest paying symbol in the game, offering the jackpot of x100,000 your bet for landing x5 on an active pay line.

Scatter Symbol – In keeping with the logo symbol idea, the winners circle logo from the gameshow is your scatter symbol. Land three or more of the scatter symbol anywhere on the reels to trigger the bonus spins feature. Scatter wins are also in play here, giving an extra pay out on top of your line win. 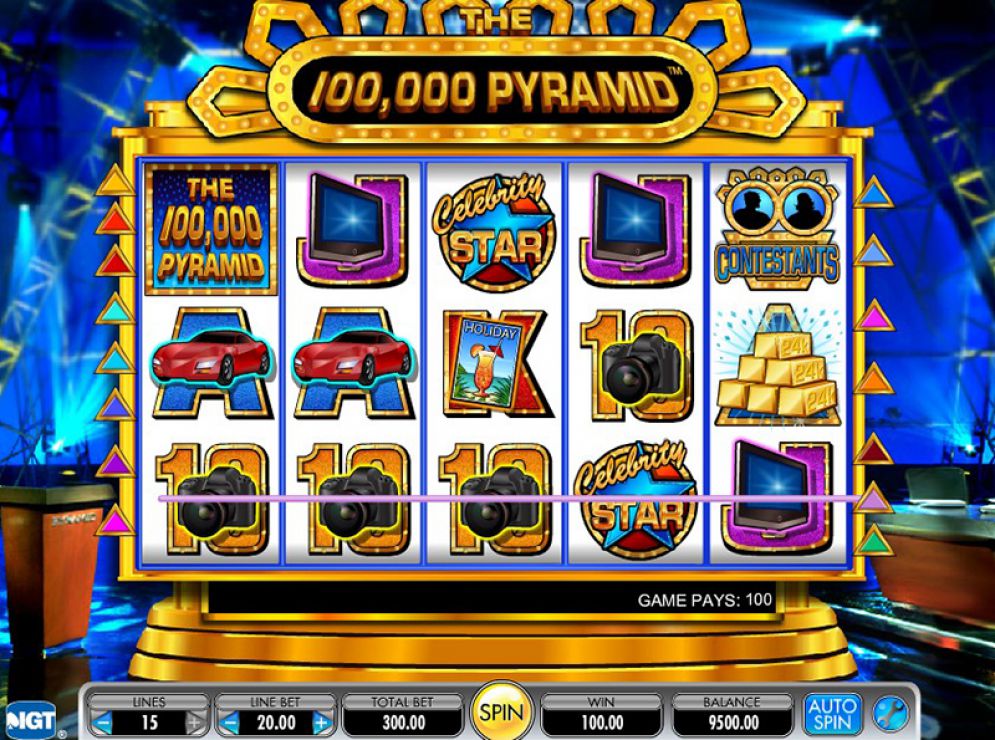 Other Symbols – As the slot is based upon a tv show it goes without saying that the symbols should represent this. High paying symbols are the mystery 7, pile of gold bars, celebrity star and contestants circles. Lower paying symbols are the car, holiday, watch, tv and camera which cover the A, K, Q, J and 10 symbols.

Winners Circle Bonus Feature – Land three or more of the winners circle logo to trigger the bonus feature. You will be taken to a new screen and faced with the 100,000 Pyramid, so you can choose your spin total and win multiplier before moving to the actual bonus spins round.

You will begin with x5 picks to use during the bonus and can opt from the squares available, starting from the bottom row. You will then move your way up to the top of the pyramid, revealing bonus spins and multipliers which will be activated once you begin your round. After completing your x5 bonus picks across the pyramid you will then begin your bonus spins. The bonus spins feature cannot be retriggered from within the feature, but thanks to the pick feature there is plenty of opportunity to grab lots of spins for the round.

The 100,000 Pyramid is actually quite an intriguing slot to play, if you can get past the cheesy tv show track playing along. There are plenty of main game wins, if you don’t mind long periods of non-winning spins in-between short bursts of winning spins. Luckily though the bonus feature triggers slightly more often, giving players a chance to bag themselves the bigger money. The game seems to be quite slow moving on first entering, but the pace picks up as you go along. We do advise to bet lower, because if you are betting with all of the lines activated the stakes can be quite high. The only good thing about the 100,000 Pyramid is that the feature can be triggered by landing the scatter symbols anywhere in view. This means whether you play with one line active or all 15, you stand an equal chance of triggering the feature. This makes it a little fairer on everyone playing, especially if you want to bet higher but with less lines activated.