Hunting trolls isn’t necessarily a past time most people think of, but if it’s a top slot game then we’re willing to give it a go. The team at Play N Go have created Troll Hunters, which provides quirky graphics and enticing features. Enter the snow-capped mountains and try to retrieve the trolls treasure to take home. 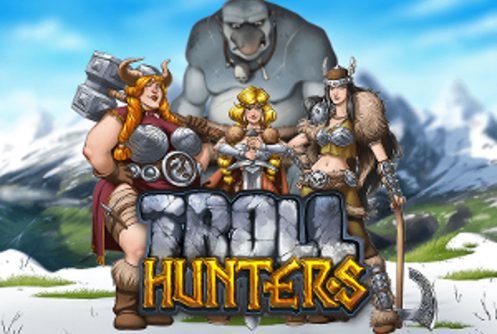 Play Troll Hunters on any of these top casino sites;

Troll Hunters is set out on a 5×5 grid which is smaller than some of the other Play N Go games, but it is still packed with features. It offers a different way of winning, because here wins are formed in lines of x3 or more matching symbols either horizontally or vertically. The RTP for the game is 96.73% and it also features a version of the cascade symbol drop too, which you will read about below. Symbols include a mix of characters and items like mugs and meat; we assume the meat is to trap the troll, but who knows. Higher value symbols are the three Troll Hunter women, the pair of earrings and the single earring. Low value symbols are the double skull mugs, single skull mug and lumps of meat! There is a mighty sounding track that plays along as the reels spin, which makes you feel almost as if an actual troll is about to jump out on you.

Bet Amounts – Betting begins at 40p per spin and can be increased up to £40 per spin, making Troll Hunters one of our more affordable slot games. You can change your bet by using the plus or minus symbols on either side of the bet amounts and then simply hitting spin.

Wild Symbol – There is a wild symbol in Troll Hunters, but it only appears as a result of making winning matches. Every time you create a horizontal or vertical match of x3 or more symbols, they will be removed from the reels and a wild symbol will be created in its place. The wild symbol is a gold square with three triangle shapes connected through the centre and it will substitute for all other symbols in the game when it appears.

Scatter Symbol – Unfortunately there is no scatter symbol in Troll Hunters, but don’t be disheartened. There is still a chance to trigger the bonus spins round, so read on below to find out how.

Cascade Symbol Feature – Most cascade symbol features remove winning combinations and replace them with new symbols. Not in Troll Hunters, because here the symbols are removed and replaced with a single wild symbol instead. So, each time a winning combination is made, those symbols drop off the reels with a wild landing in one of the positions left open. If that wild contributes to a new winning combination the process repeats again. However wild symbols are not removed when the cascade symbols do, they remain in position until there are no new matches made and you return to paying spins. 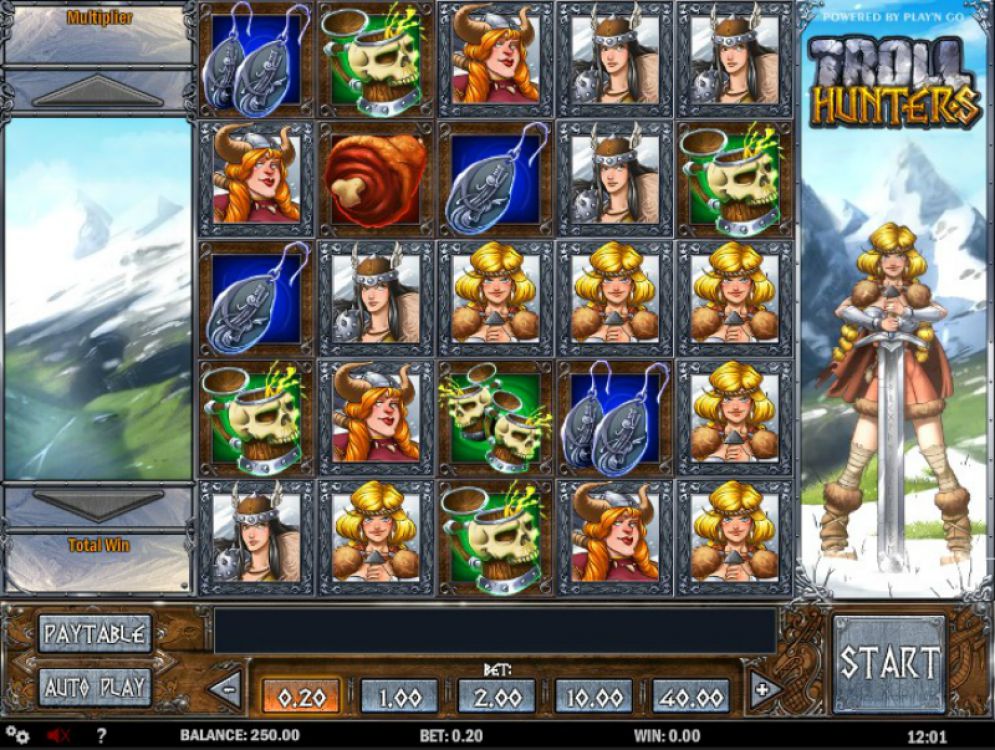 Bonus Spin Feature – As the symbols are removed the empty space will begin to reveal the word B.O.N.U.S in different positions underneath. If you manage to trigger enough cascade symbol drops to reveal the whole word, then you will trigger the bonus spins feature. Here you will be awarded with x10 bonus spins to play through. This round is played on a different set of reels and you now have a troll stood to the right of the reels as you play. There are also new symbols added meaning the high paying symbols are now the three troll hunter women, the axe, the hammer and the sword. With lower paying symbols now being the shield, helmet, gauntlets and lantern. A new symbol is also added which acts as a scatter, and it is the trolls face. Landing x5 or more of the troll symbol will add an extra x5 or more spins to your total up to the maximum of x20 each time. There is no limit to the number of times you can add to your spins, but you will need to land x5 or more of those troll face symbols in order to keep adding to your allocation. The round ends once all spins awarded have been played through.

Troll Hunters is an extremely fun game to play and offers a nice twist to the things that we normally take for granted such as a scatter symbol, cascade feature and even the win lines. Despite only having the one main feature there are still plenty of win opportunities during the main game. This is in part thanks to the cascade drop, the wild symbol and the multiplier meter, which all link in with forming winning combinations. These occur regularly although not always in the amount needed to trigger the meter. Troll Hunters is well designed and highly playable, so why not head over and see what you think!

May 25, 2019 Boku Slots Comments Off on Doctor Love on Vacation