The Vikings provide a wealth of inspiration when it comes to slot games, thanks to things such as their runic script, legendary battles and of course their gods. Viking Runecraft from Play N Go combines all of the above, teamed with features that are sure to entertain. 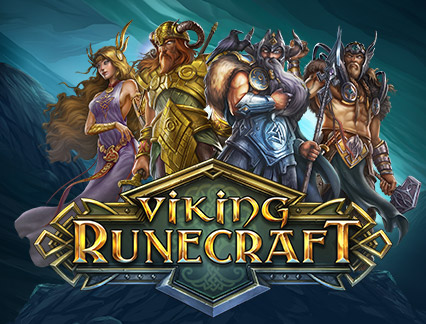 Play Viking Runecraft on any of these top casino sites;

Viking Runecraft is played on a 7×7 grid instead of the usual 5-reels. It offers a cluster pays set up, where you need to match x5 or more symbols to win and a cascade symbol drop feature. Then throw in the high RTP of 96.7% and you’ve got a pretty great basis for a top slot game.

As for the reels themselves they are set deep in the mountains, with a Viking god stood to the right watching over them. Symbols contain a mix of Viking runes and icons that you would associate with the Vikings, such as axe’s, helmets and more. Higher value symbols are Thors hammer, the horned helmet, the axe and an anvil shaped pendant. Lower value symbols are the runes carved into red, yellow, blue, purple and green stones. As your reels spin there are some pretty cool sounds playing, which give the game an almost movie like feel to it.

Bet Amounts – Betting on Viking Runecraft begins at 10p per spin and can be raised to £100 per spin. To amend your bet hit the circle with three lines found at the bottom right of the screen. This will expand your bet screen, then you can use the slider to adjust your bet up and down. Once you are happy with the bet showing, hit the arrow in the bottom right of the screen to return to the game and continue playing.

Wild / Scatter Symbol – There is no wild or scatter symbol in Viking Runecraft, but don’t let that put you off as Play N Go has a mass of extras in store for you.

Cascade Symbol Drop Feature – Before we head into the main features of Viking Runecraft we had to mention this to you. It is always exciting to see a slot game featuring the cascade drop, as it is a huge benefit to players. Every time you make a winning combination those symbols are removed from the reels. New symbols will then fall into the empty space and if new combinations are made the whole process will repeat until no new matches are created.

Gift of the Gods Feature – Viking Runecraft operates a level up feature named Gift of the Gods. Each level is attributed with the power of one of the four gods. Each god will be awarded at random at the beginning of each new level and bring with it a power up to help boost your wins.

To level up you simply have to complete a pattern that is laid out beneath the reels. The pattern is shown in blue lights beneath the reel symbols. Every winning combination that covers part of the pattern will turn the part it covers from a blue light to a yellow light. Once the whole pattern is turned yellow the level is completed and you will move to the next level and pattern. As well as changing the god and power for the next level, you will also get to play the Runes of Valhalla feature which we have explained below. 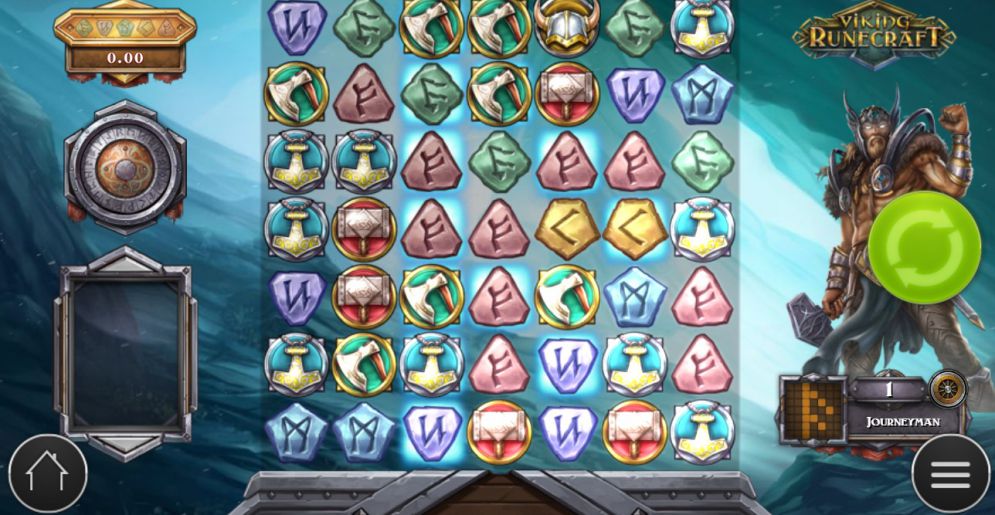 Runes of Valhalla Feature – This is an extra feature on Viking Runecraft triggered by completing each level and awards the chance to spin the wheel of fortune. The wheel is split into sections and if you land on any of the sections containing a runic engraving, then you will win the Valhalla Bonus. The bonus is a coin prize amount and it changes as the game progresses, but it is always on view at the top left corner of the screen.

Charge of Destruction Feature – Underneath the Valhalla bonus prize pot is the rune tone wheel. This wheel is charged up every time a winning combination is made on the main reel set. But it will only activate a mini feature after at least x20 win combinations have been made.

Thanks to the cascade feature, it is possible to trigger the charge of destruction feature more than once on any single paid spin. The more symbol removals made due to forming wins, the more chances there are of filling the wheel up and activating it.

Viking Runecraft has an awful lot going on that’s for sure, but hopefully we have managed to clear it up a little bit for you. You will never get bored with this slot game and it is very enjoyable despite the long-winded features it has. There are lots of chances to win in this game right from the start, thanks to the various things happening in the main game itself. It is harder to trigger the bonus spins feature, but when it does trigger it is worth the wait.