Our next slot is based on one of the characters from Alice in Wonderland, which you may have guessed from the title. He needs no introduction, he is always late, he is of course the White Rabbit and thanks to the design team Big Time Gaming he now has his very own slot. With three fantastic features White Rabbit has a lot to offer players, so don’t be late for this very important date! 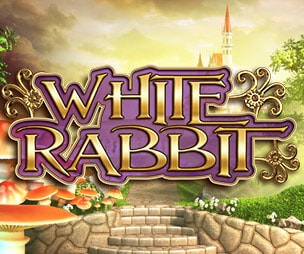 Play White Rabbit on any of these top casino sites;

White Rabbit is a 5-reel slot offering players a variable RTP of 97.39% to 97.72% and the fabulous megaways wins. Read about the Megaways wins and how this is beneficial to the player further down below. Symbols can appear stacked and include characters and icons from the Alice in Wonderland tale and jewels too. High value symbols are the Red Queen, red jewel, blue jewel and green jewel. Lower value symbols are shown as 2 parts, the character and the card value it represents. So, they will run as follows the Cheshire Cat is A, Tweedledum and Tweedledee are K, the Gryphon is Q, the Hatter is J, a teapot is 10 and the chess piece is also the 9. If the character symbols appear on the reels smaller than x2 positions they will transform into the playing card symbol instead. Your reels are set inside the wonderful world that the characters of the tale inhabit, with lush green forestry on one side and the caterpillar on his bed of mushrooms on the other. There are birds tweeting, clocks ticking and an arrangement of music befitting the theme of the game playing along too.

Bet Amounts – Betting on White Rabbit begins at 10p per spin and can be adjusted up to the maximum of £20 per spin. To adjust the bet use the arrows underneath the bet amount until you are happy and then just press spin.

Wild Symbol – Your wild symbol in White Rabbit is depicted by the fading figure of Alice and she will only land on reels 2, 3, 4 and 5. She will substitute for all other symbols except the scatter, the cupcake and the feature drop.

Scatter Symbol – The White Rabbit himself makes up your scatter symbol and he will only land on reels 2, 3 or 4. Landing three or more of the White Rabbit scatter on those reels will trigger the feature for you. You can also buy into the feature using the feature drop option which we will explain further below.

Caterpillar Bonus Wilds Feature – At any point during the base game the sleepy caterpillar will awake and blow smoke rings onto the reels. These smoke rings will transform into bonus wild symbols when they land on the reels. The caterpillar will award up to x4 bonus wilds and each one will award a multiplier to any win they help to form. All bonus wild symbols substitute for all other symbols except the scatter and Feature Drop! When they land, they offer multipliers of either x2 or x3 the bet amount. 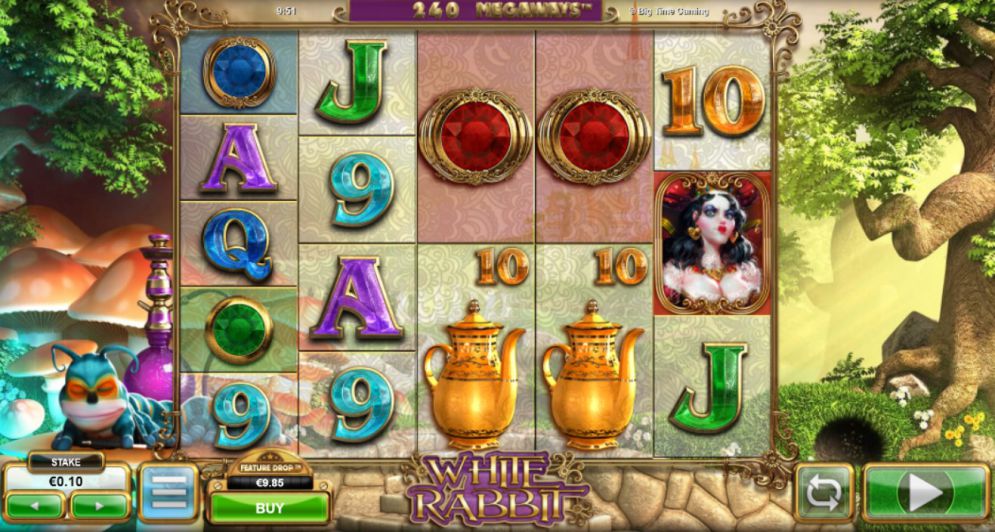 Bonus Spins Feature – To trigger the bonus spins feature you need to have landed x3 or more of the White Rabbit scatter on reels 2, 3 or 4. Alternatively you can use the feature drop option and buy yourself in to the feature which is explained below. Upon entering the bonus spins you are allocated with 15 spins to play through.

Your reels are now able to expand up to 12 positions high as well. In order to expand your reels, you need to bag a cupcake symbol, but once you have the reel will remain expanded for the remainder of the game. Every time you land a cupcake the reel it is on will expand once more until it has reached the full 12 position capacity!

Feature Drop Option – If you don’t want to wait for the feature to trigger you can buy into it at any point in the game. It will cost x100 your stake amount, so be sure it is something you want to do before going ahead. For example, if your stake is £10 per spin your buy into the feature drop will be £1,000!

Once the cost showing in the feature drop buy in zone reaches zero it will trigger automatically. But as it reduces you can hit buy in at any time. This gives you plenty of chances to get into the feature, but it all depends on you as to how much it will cost you to do so.

White Rabbit seems complex to begin with but once you start to play the features become easily understandable. There are lots of wins to be had here in both the base and bonus features and they are easier to trigger than you would think.

The game is well designed and extremely well thought out in terms of both player enjoyment and profitability too. We don’t advise hitting the feature drop option too often, if at all, as the feature triggers relatively easy within the game anyway. But if you are planning on using it then maybe wait a few spins until those Big Time Gaming coins drop and reduce the cost for you. We loved all the little nods to the story with an eat me label on the cupcake, to the teapot symbols and of course who can forget the caterpillars smoke rings? We think White Rabbit has established itself as a great game in this particular genre and that people will be playing it for years to come, we know we will be back!