Yggdrasil Gaming are well known for their complex games and this next one is no different. Enter the dark world of alchemy, because this next game is based on a very well-known Greek inventor. Alchymedes dedicated his time trying to turn metal into gold and here in this game he has finally managed it. Now it’s up to you to separate him from his riches and bestow them upon yourself, if you are brave enough to take him on that is? 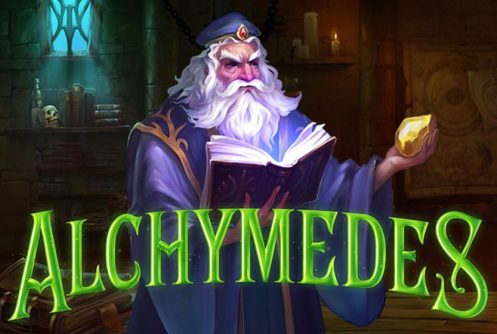 Play Alchymedes on any of these top casino sites;

Alchymedes is a 5-reel, 30 fixed pay line slot that offers players an RTP of 96.10%. Set inside an alchemist’s lab the reels form part of the alchemy table. On either side is a potion vial that fills up in relation to one of the features. On the reels themselves are symbols that are a combination of potion bottles and card symbols. Higher paying symbols are the purple, red, blue and green potion bottles. Lower paying symbols are the heart, spade, club and diamond set inside some geometric patterns. Adding to the atmosphere is a spooky sounding track that plays as the reels spin.

Bet Amounts – Betting on Alchymedes begins at 30p per spin and can be increased up to the limit of £60 per spin. You will find the bet amount to the lower left of the reels, with a plus or minus symbol on either side of it. Amend the bet by clicking on those symbols until you reach your desired bet, then just hit the spin button to resume play.

Wild Symbol – The wild symbol is a cauldron with green smoke flowing from the top and it can land anywhere on the reels. It will substitute for all other symbols in the game and it also has some hidden extra features which will be explained below.

Scatter Symbols – Unfortunately there is no scatter symbol in Alchymedes, but worry not as Yggdrasil Gaming don’t leave you without any interesting features. There are level ups, extra bonuses and more on offer so read on below to find out more. 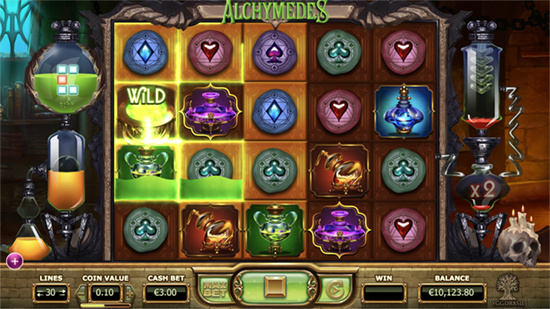 Level Up Feature – As the game is in play and you begin to form winning combinations, you will see a change occurring to the background of the reels. Any symbol position that forms part of a winning combination will have the background to it changed to gold. Once all the reel positions are transformed you will have completed that level and in turn be able to level up.

After completing each level, you will be taken to a new screen and shown a set of scales, on either side is a choice, either wild pattern or win multiplier. You get to pour potion into each side of the scale thus deciding if you start off with a higher win multiplier or better wild pattern on the next level.

After each level up you will be awarded the win multiplier that is shown underneath the red potion vial. The multiplier will be added to the last formed win only and will reset on entering the new level.

Wild Patterns Feature – Whenever a wild symbol lands it will snake across the reels in a set pattern. These patterns are activated at random and can change from level to level. The green vial to the left of the reels show what pattern is currently active and any wilds that land will follow that pattern.

Alchymedes Bonus Feature – Upon the completion of each new level you can be randomly awarded one of the following bonus features.

Alchymedes may not have a bonus spins feature but that is something that can be forgiven, as the game itself brings far more to the table. Yggdrasil Gaming have developed a wealth of chances to land the bigger wins by way of levelling up, extra bonuses and of course those alchemists’ scales to tip the next level in your favour. Add to that the fact that the main game wins land thick and fast, then you will find that Alchymedes quickly becomes a firm favourite as it has with many other players.