This next slot theme should need no introduction, so get yourselves ready for some 80’s rock music royalty. Blueprint Gaming have put together a true homage to the mighty Spinal Tap. This slot game is busy, fast and noisy, but will any of their musical luck rub off on you for that magic win? 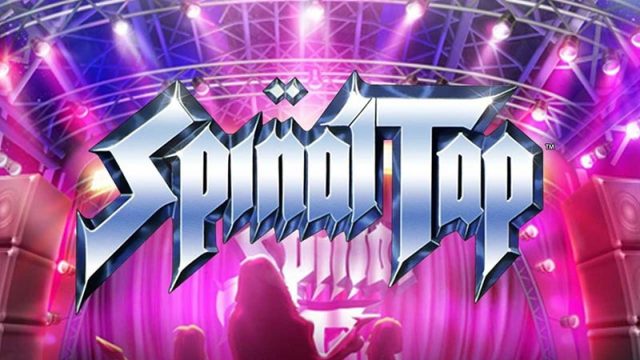 Play Spinal Tap on any of these top casino sites;

Spinal Tap is a 5-reel, 243 ways to win slot that offers an increase on the win lines up to 2187, which we will go into further below. It offers a variable RTP of 96.92% to 97.02% which is worth an air guitar solo or two! Spinal Taps music plays along in the background, with some added musical sound effects to give the game a little bit of an upgrade. Your reels are set out in the front of a huge arena styled stage, making you feel like you are front and centre at a gig! Symbols include the four band members and the Spinal Tap logo which make up the higher values and your card denominations A, K, Q and J making the lowers.

Bet Amounts – Betting on Spinal Tap begins at 30p per spin and can be increased up to £30, which isn’t too heavy on the pocket. There is also the option to choose the VIP pass spin which costs x50 your stake amount to play. So, if you have bet 0.30p it will cost £15 to play this option. We will go into this further below.

Wild Symbol – A green guitar pick is your wild symbol in Spinal Tap and it will substitute for all other symbols except the skull with horns bonus symbol.

Bonus Symbol – Your bonus symbol on Spinal Tap is a skull with horns and landing three or more of these will trigger the bonus game for you.

VIP Guest Pass Feature – You will see at the left of the reels a guest pass symbol. Clicking this will increase your bet amount by x50, but for that cost you will be playing one spin with 2187 pay lines in play! Not only that but as the reels spin you will see a record pop into the upper left corner which will also spin. The record will award one of four potential extras that can be added to the main reels:

You get a second chance of spinning the record if you don’t like the feature on offer from the first spin. Once you have chosen your extra it will be added to the reels and you can then reap the rewards.

Rock Mode Feature – Rock Mode offers the same options as the VIP pass, except you have the chance of triggering this from within the main game. It occurs randomly so there is no guarantee it will happen. But you will experience any one of the four extras found in the VIP Guest Feature at a fraction of the cost of the VIP Guest Pass. 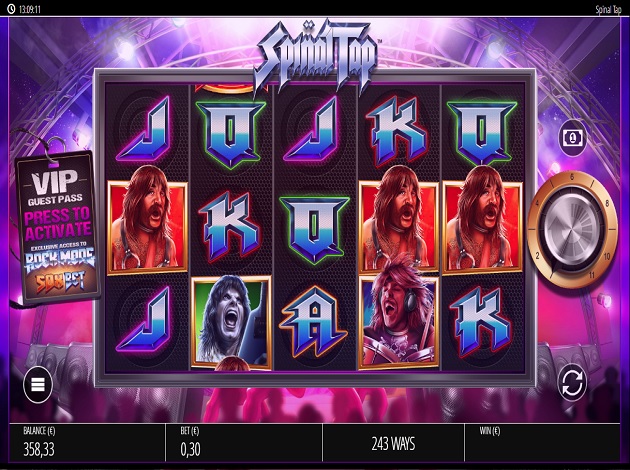 Spinal Tap Tour Feature – Having landed three or more of the skull bonus symbols anywhere on the reels, you will trigger this feature and its good one too! You will be taken to a new screen full of records and there you simply keep picking records until you complete a full set that is to the left of the reels. Each of these sets are named and will allocate a special feature game or bonus spins session for you.

There is a lot to take in with the bonus round on Spinal Tap but actually once you are playing it, it becomes much clearer.

Spinal Tap is a veritable smorgasbord of noise, lights and action. There is a lot going on and this can be a bit overwhelming sometimes. But, for some reason it works with this game and actually all runs really smoothly, rather than being too much at once. Blueprint Gaming have given players a fair chance too with the VIP Guest Feature and Rock Mode both offering the same extras. One you can pay extra for in the knowledge you will get one spin at that level, the other you have to wait for in the main game in the hopes it will trigger. What we can tell you is that in the time we spent on this game we triggered Rock Mode just once, but we didn’t trigger it with the x50 stake option!  Wins happen fairly regularly within the base game, but the bonus is where it’s all at. This is where it gets exciting as no matter which level you enter the bonus, you are in with a fighting chance to trigger the world tour for the big money. Additional music tracks and soundbites make the atmosphere of the game very entertaining. Whether you are a Spinal Tap fan or not you are going to love this game!