If you are thinking that the name of this next slot sounds like something out of a factory, you are almost right! We are heading deep into the bowels of the biggest robot manufacturers in the online world and straight onto the assembly line with NetEnt. It is time to fire up the Wild-O-Tron 3000 and start getting those robots pieced together before the shift ends. 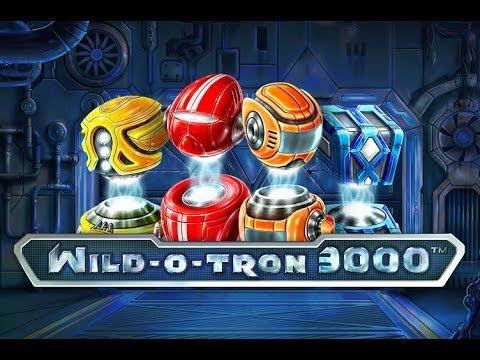 Play Wild-O-Tron 3000 on any of these top casino sites;

Wild-O-Tron 3000 is a 5-reel, 20 fixed pay line slot offering assembly line workers an RTP of 96.01%.  It looks like it is set inside a factory, there is even a master computer to the right of the reels controlling things just like a foreman would. On the reels you will see various robot body parts, and, in some instances, they will land in formation making creepy looking fully formed and stacked robot symbols. There is some interesting electronic, factory type sounds in the background as the reels spin. Unfortunately, these got slightly annoying after a while, so we switched them off in order to better enjoy the game.

Bet Amounts – Betting on Wild-O-Tron 3000 begins at 20p per spin and can be adjusted up to the highest bet of £200 per spin. Adjust those bets by changing the coin value to the right of the spin button and the coin level to the left of it. Make sure you are happy with your stake amount before hitting spin, because once you do there is no stopping the funds leaving your balance.

Wild Symbol – A white orb with a neon blue ‘W’ is your wild symbol in Wild-O-Tron 3000. It will substitute for all other symbols within the game and is your highest paying symbol too. Land 5 of these on a winning pay line to bag yourself a x500 coin win. When it forms part of a win the orb expands and glows, giving a little animation to an otherwise boring symbol. 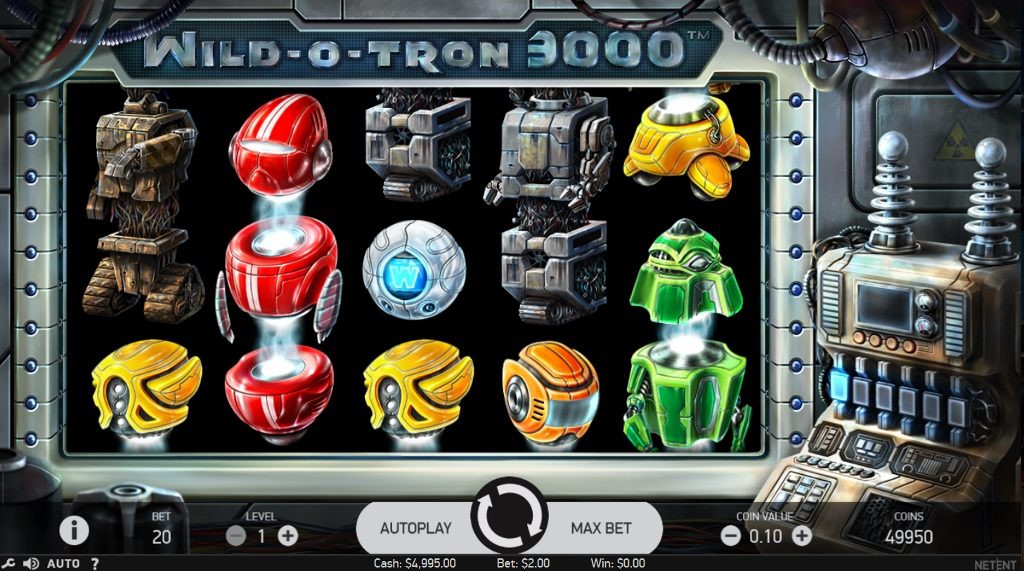 Scatter Symbol – There is no scatter or bonus symbol in Wild-O-Tron 3000 which may be off putting. However, there is a still an interesting feature to play for in the game and it is triggered at random instead of having to land scatters.

Other Symbols – As you would expect in a game about robots all of the symbols take robot form. Each symbol is a different coloured robot that is split into three parts. They appear stacked on the reels at all times, however you may only see the head, the bottom or some variation depending on where the reels land. The highest paying symbol begins with the red robot and in descending order goes through to the orange, yellow, green, blue, metal and the dirt covered robot is your lowest.

Wild-O-Tron Feature – Triggering this feature happens at random and can occur on any spin. you will notice the machine at the side of the reels will start to glow and the lights on the main face will light up. The more lights that are lit means the more robots will be turned wild, you will always get at least 1 wild robot but sometimes up to all 6 can be turned.

Wild-O-Tron 3000 is a basic but enjoyable game overall. NetEnt went with the less is more route when designing this game and in a way it works. We would have liked to have seen a scatter game in keeping with the theme. The scope for throwing in a few extra features was wide considering the genre, but it didn’t detract from the fun of the game as it stands. What was interesting was the Wild-O-Tron 3000 feature, when it strikes up and turns some or all of the robots wild. Upon first playing, the feature seemed to take a while to trigger, but after playing for a while it began happening more frequently. Considering it is the only feature, we would have liked it to activate a bit more often but that’s really the only negative point.

Wins came as often as you would expect from a game of this nature, albeit smaller wins as opposed to bigger. That being said, get yourself at least 3 robots turned wild and you are looking at some bigger wins there; you just need to be patient. If you are into slots for the fast-paced big wins then Wild-O-Tron 3000 is not for you. But it does make for a good gap filler if you have a few minutes to spare here or there and don’t want to invest too mush energy into a game.

May 8, 2018 Boku Slots Comments Off on Thunderstruck 2