Wolves aren’t usually the first thing people associate with slots, but NetEnt isn’t letting that stop them. They have combined electro themes with wolf type images and a singular bonus feature. Then they wrapped it all up and called it Spinsane, so now it’s up to us to see whether this quirky mix works or not? 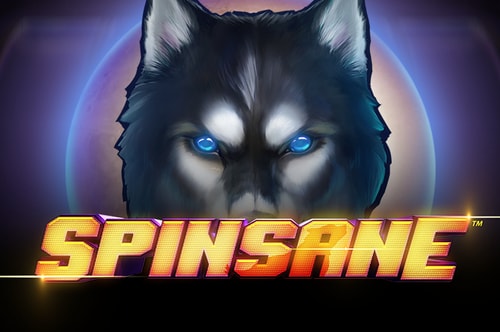 Play Spinsane on any of these top casino sites;

Spinsane is a 5-reel, 27 fixed pay line slot that offers a 96.26% RTP. The game itself looks as if it is set inside a space aged cylinder, which isn’t quite where we expect to see wolves! There are lots of flashing lights too, keeping your eyes on the reels as they spin. Symbols include a range of wolfish things such as paw prints, claw marks and oddly there are lots of blank spaces too. As you play the game there seems to be what sounds like noises from a dance club in the background. Not quite in fitting with the theme, but then again none of it really matches a specific genre.

Bet Amounts – Betting in Spinsane begins at 10p per spin and can be increased up to £500 per spin. You can amend the bet by changing the coin value found to the right of the spin button and the coin level found to the left of it. Each one has plus and minus symbols on each side for you to use when adjusting the bet. Once you have reached your desired bet amount just hit spin to continue with your game.

Wild Symbol – Spinsane’s wild symbol is a gold ‘w’ on a blue background. The wild symbol will only appear on reels 2, 3, 4 and 5, and it will substitute for all other symbols except the scatter.

Scatter Symbol – Your scatter symbol in Spinsane is a wolf standing in front of a full moon. Landing a minimum of x5 full moon scatter symbols anywhere on the reels, will trigger the bonus spins feature. 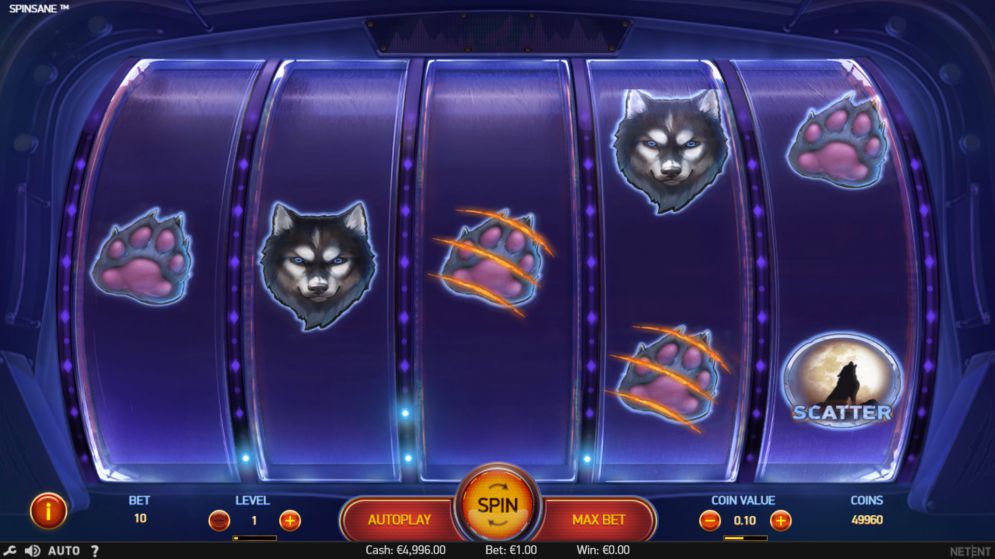 Bonus Spins Feature – Once you have landed at least five or more of the full moon scatter symbols on the reels, you will enter the bonus round. You will now be awarded a number of spins, which are worked out at double the number of scatters you had upon triggering. For example, if you had x5 scatters on the reels when you entered the round, you would be awarded x10 spins to play through. During the bonus round you will be awarded x1 extra bonus spin for every full moon scatter symbol that lands on the reels.

Overlay Wild Reel Feature – This extra feature is only available within the bonus spins round of Spinsane! It is a little something extra from NetEnt to help players boost their chances of getting more wins. On every spin during the bonus round one of the reels will turn completely wild at random. Reels 2, 3, 4 and 5 are the only reels included in this feature, but whatever way you look at it, it will certainly help boost those win chances.

Spinsane doesn’t hit the spot for us as much as other NetEnt slots have done in the past. There are too many blank spaces on the reels and the game is really slow. By this we mean the reels seem to take forever to land in place and that can be quite tedious at times. There are some redeeming qualities for Spinsane though such as the bonus feature and the main game wins. Thanks to the doubling of scatters when awarding the spins, you can be guaranteed to enter the round with a minimum of x10 spins and the chance to bag extra spins as you go. Of course, the extra wild reel on every spin during the bonus is a huge help as well. Despite the number of blank spaces landing on the reels there does seem to be regular wins coming through, but they do take their sweet time in appearing. As a result, we would advise to bet low to medium in order to sustain that wait, otherwise you could be burning through your balance in no time.