If you love the idea of Indiana Jones and searching for treasures, then you will love this next slot direct from the Microgaming library. Relic Seekers is all about buried treasure and focuses on three treasure hunter characters. Despite being set in the distant past there are lots of modern twists to keep you occupied, including rolling reels and an interesting bonus spins round. 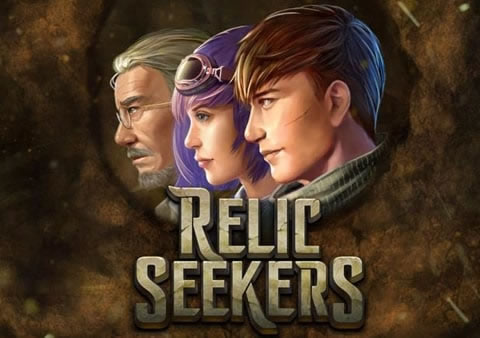 Play Relic Seekers on any of these top casino sites;

Relic Seekers is a 5-reel, 25 fixed pay line slot offering an RTP of 96.03% to players. Upon entering the game, you will see that your reels seem to be set inside a tomb. The reels are carved from stone and this is where the Relic Seekers attempt to unearth the treasures within. There are lots of interesting symbols running through the game including some ancient script and the three main characters. Higher paying symbols are the three character symbols in blue, red and green and their trusty canine adventurer with the gold background. Lower paying symbols are some form of runic script with each one having a different style and colour attached in gold, red, green, blue and purple. In the background there is a fairly epic soundtrack playing as the reels spin, adding a little something extra to the overall feel of the game.

Bet Amounts – Betting on Relic Seekers begins at 25p per spin and can be increased up to £100 per spin. To amend your bet, use the plus and minus symbols to the right of the bet amount until you have reached your desired bet amount.

Wild Symbol – Your wild symbol in Relic Seekers is a lantern with the word ‘wild’ beneath it. The lantern wild will substitute for all other symbols except the scatter. It also offers the highest paying win for the whole game. Land x5 on a winning pay line to add x42 your bet amount to your balance.

Scatter Symbols – The scatter symbol is a kind of mechanism; you will see it burst into life when 2 or more land on the reels. Landing three or more of the scatter will trigger the feature for you. Scatter wins are also active in Relic Seekers, providing an extra win of x2 your bet amount on top of your line wins. The x2 multiplier is awarded whether you land x3, x4 or x5 scatters on the reels.

Rolling Reels Feature – This is something lots of slot providers imbed in their games, but it comes under many names. Some call it avalanche, or symbol drop, but Microgaming have dubbed it rolling reels. All it means is that every time you land a win, those symbols forming it will be removed and new ones will fall into their place. If a new win is formed, they will be removed, and the process begins again until no new matches are made. It is always a great addition for players as it can mean multiple win chances from one paid spin.

Wild Turn Feature – During the rolling reels feature the wild turn becomes active. On every 2nd, 4th and 6th consecutive rolling reels one of the three main characters will turn completely wild. You will see at the left of the reels the three characters with a meter to the side of them. As the meter fills up it will show you which symbol will turn wild next. 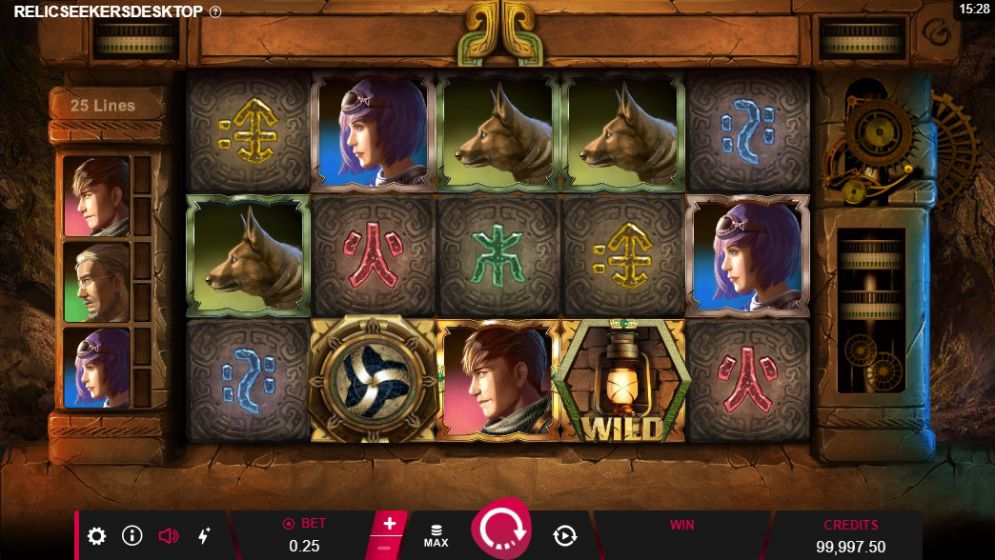 Bonus Spins Feature – Land yourself three or more of the scatter symbol to trigger the bonus spins feature. You will now be awarded with x10 bonus spins to play through, with a special extra feature called the Key Collector which will be explained below. The bonus spins feature can be retriggered from within the round with no limit to the number of times this can happen.

Collect keys on reel 5 during the bonus spins to be awarded extra spins and multipliers for the remainder of the round.

With lots of interesting features, an epic soundtrack and great design, Relic Seekers is certainly one to add to the favourites list. Highly playable and lots of win opportunities in both the main game and the bonus feature too. Proving popular with many players across the world, Microgaming seem to have hit the nail on the head once again with this extremely enjoyable game.

Thanks to the rolling reels feature being present, there are multiple win chances from one single paid spin and that is a winning combination in our eyes. This is before you take into account the extra spins and multipliers you can bag during the feature too. On top of all that the wild turn feature is active in both the main and bonus games as well, it’s almost as if Microgaming want you to take away all their treasures.