Retro Rush is a sci fi themed slot created by Playtech and filled with bright neon colours and crazy features. It’s not just the background that adds character to the game, because there are a number of street racers who appear in between the spins of the reels. It’s time to get the engines running and join the other racers at the starting line. 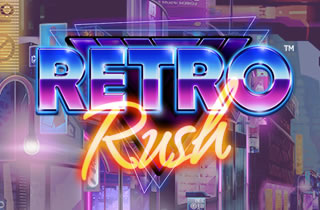 Play Retro Rush on any of these top casino sites;

Retro Rush is a 5-reel, 30 fixed pay line slot that offers players an RTP of 96.10%. Your reels are set on the drag racing street scene far into the future, where all the buildings are stories high and enshrined in neon lights. Symbols include a mix of the characters, card symbols and oddly things like chinese take out cartons? Higher paying symbols are the x5 characters the two female racers in red and purple and the three guy racers in yellow, green and blue. Lower paying symbols are the A, K, Q, J and 10 symbols usually found on playing cards, but here they are designed to look like they belong on the side of a racing car.

There is an interesting track playing as the reels spin, which feels almost 70s in style with the synthesized piano and wailing music. It fits with the game quite well but was slightly distracting over time, so we switched it off after a while and played the game on mute.

Bet Amounts – Betting in Retro Rush begins at 15p per spin and can be increased up to £120 per spin. If you wish to amend the bet, use the symbols on each side of the amount until you reach the bet you wish to continue playing with.

Wild Symbol – There are three wild symbols in Retro Rush, and they come with a nice little twist in the form of a feature which we will explain in a moment. The wild symbols are depicted by a x2, x3 and x5 symbol, which is designed to look as if made into a neon street sign. These will substitute for any other symbol in the game except for the scatter and can land anywhere on the reels. 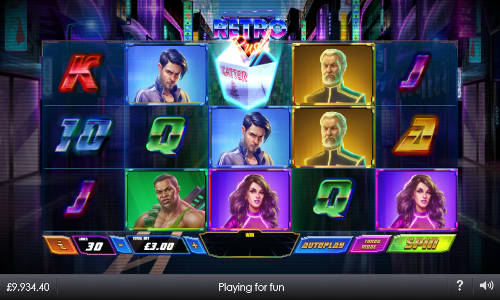 Sticky Wins Feature – This is an interesting one as technically it is a respin feature with a twist. The way that it works is as follows: every single symbol that forms part of a winning combination will be held in position whilst the remaining reels respin. If any new symbols are added to the existing win, they will also then be held in place and another respin will occur. This whole process carries on until no new wins are created by the respins.

Bonus Spins Feature – To trigger the bonus spins feature on Retro Rush, you need to land three or more of the takeout scatter symbol on reels 2, 3 and 4. If you manage this you will be allocated with x5 bonus spins to play through. During your bonus spins feature you gain a 6th reel extending the pay lines from x30 to x60 and an extra wild symbol too. This wild symbol takes the shape of a female racer silhouette. She is a stacked wild symbol that will expand to fill the whole reel whenever a x2, x3 or x5 wild symbol lands on the reels. The silhouette wild will work in the same way as the standard wilds did. Meaning whichever wild symbol she expanded from will create a full stack of multiplier wilds of the same kind. There is no way to retrigger the bonus spins from within the feature, so once all x5 spins have been played you will be returned to the main game.

Retro Rush has everything a neon sci fi slot can offer you, including a brief but epic bonus spins feature. The sticky wins are a welcome addition that certainly helps boost the win potential in the game and that is always a huge draw to players. The bonus spins feature takes a little longer to trigger than in other slots, as you need to land the requisite symbols on reels 2, 3 and 4 to activate it. But despite this when that feature does activate it is worth the wait thanks to the doubling of the pay lines, the extra reel and the extra wild. There may only be 5 spins, but you are getting a lot of help in forming those wins whilst you are there. Whether you are into the sci-fi theme or not, we are sure you are going to have a great time playing Retro Rush!