A fantasy themed, mystical slot is always going to draw a good crowd. Foxium have played this one well, creating a heroine for gamers to get behind and a champion. They appear to have taken design inspiration from the Greeks and added a touch of the fantastical. Adelia the Fortune Wielder is sure to capture your imagination with its fun and entertaining features. 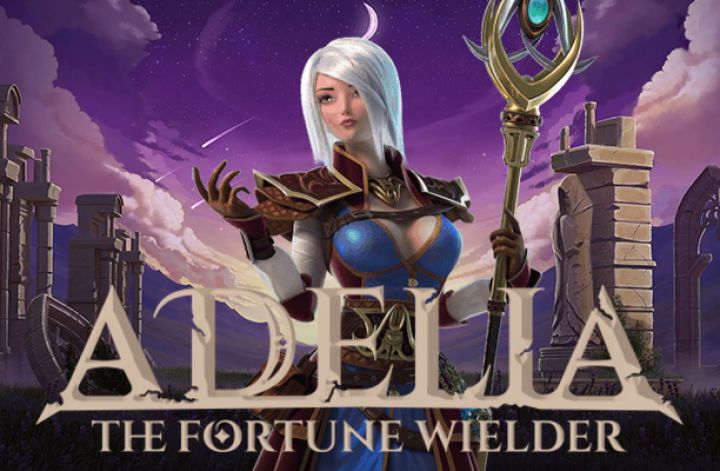 Play Adelia the Fortune Wielder on any of these top casino sites;

Adelia the Fortune Wielder is a 5-reel, 20 fixed pay line slot offering players an RTP of 96.5%. The reels look as if they are set in a stone temple somewhere high on a hillside, with Adelia standing off to the left. She will move and swing her staff as the reels spin and in the background you can hear birds and the breeze, almost as if you are on the hillside with her. Symbols take varying forms with higher values depicted by Adelia’s staff, a book, pouch, a knife and a vial of liquid. Lower values are depicted by the A, K, Q, J and 10, looking as if they are made from swords and glowing with gold and orange colours.

Bet Amounts – Betting on Adelia the Fortune Wielder begins at 20p per spin and can be raised to £40 at the most. You will notice your bet amount to the left of the spin button and it is here you will need to adjust your stake too. Either click on the green square to expand the stake screen and choose from the amounts on show or use the arrows at the side to lower or raise your bet.

Wild Symbol – A gold and purple emblem with the letter W on the front is your wild symbol on Adelia the Fortune Wielder slot. It will substitute for all other symbols except the scatter. Only appearing on reels 2, 4 and 5 in the base game, but on reels 2, 3, 4 and 5 in the bonus. 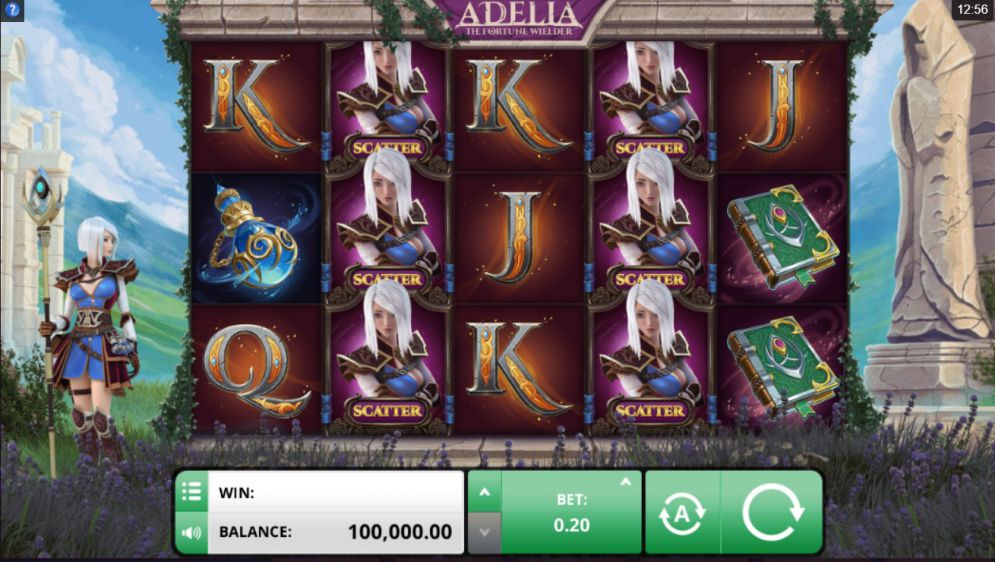 Multiplier Wild Feature – Whilst the normal wild will appear on reels 2, 4 and 5 in the base game, this wild will only appear on reel 3. But when it does it will have a random multiplier on the front instead of a W. Multipliers available are x2, x3, x4 and x5 the line bet amount and are applied to any line wins the multiplier wild forms part of.

Adelia’s Respin Feature – Any time you land a stack of wild symbols on reel three in Adelia the Fortune Wielder, you will trigger this feature. You will now receive one spin with the wilds held in their place on the reels. If you land a win on that spin you will be awarded the win and another spin. For every win landed you will be allocated another spin, but as soon as a loss is incurred the feature ends.

Bonus Spins Feature – Landing stacks of the Adelia scatter symbol on reels 2 and 4 will trigger the bonus, if you have 5 or more spaces covered. Spins will be allocated to you depending on the number of symbols present when it triggers.

Each time the Adelia scatter lands in the bonus round, you will have x2 extra spins awarded to your total. As the reels spin you will see gold coins landing on random symbols, as they land Adelia will summon them and slot them into place below the chest above her head. You begin with a blue chest and as each of the three slots are filled, they will move to the green and then the purple chests. Each chest will award multipliers to certain symbols for the remainder of the bonus spins round.

Multipliers awarded will range from x2, x3, x4 and x5 and are allocated at random once the chest has been unlocked. You can collect multipliers on all symbols if you are lucky enough, to unlock all three chests within your bonus spins round.

Adelia the Fortune Wielder is a great game, but it can be somewhat long winded trying to trigger the feature. Thankfully the respin mini feature triggers a lot more often giving you reason to carry on spinning. Overall Foxium have done well with the design, though we would have liked to have seen a little more in the features rather than just respins. There is huge potential for bigger wins once you get those chests unlocked inside the bonus spins and that is what kept us going. Luckily the cost per stake doesn’t go too high. We found that even at the lower stakes the wins were still substantial enough to justify the wait for the bonus to trigger.