It isn’t always movie characters, ancient civilisations or indeed fairy tales that make the best slot games. Occasionally a great character is found in literature and immortalised within 5 reels and multiple pay lines. Such is the case with Pragmatic Play’s slot named Beowulf, a character you may well remember from English classes in school. 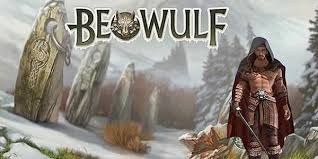 Play Beowulf on any of these top casino sites;

Beowulf is a 5-reel, 40 fixed pay line slot that offers players an RTP of 96.66%, which is very healthy indeed. The reels spin inside an elegantly designed golden frame carved with intricate Celtic designs. Your symbols range from characters of the Beowulf tale, to card suit emblems all brightly coloured to catch the eye. Higher value symbols are King Hrothgar, the Queen, a long ship, a horn and a ring, with lower values being the card suits of a spade, club, diamond and heart. In the background there is an almost epic sounding music track, with sound effects playing on wins and respins.

Bet Amounts – Betting begins at 40p per spin and can be adjusted to the maximum of £200 per spin. In order to amend your bet, you need to click on the plus or minus symbol on either side of the spin button. This will open up the bet screen where you can change the coin level and coin value until you are happy with your stake.

Wild Symbol – A green gem edged in gold is your wild symbol in Beowulf. It will substitute for all other symbols except the sword and shield scatter, and the bonus symbol which is Beowulf himself. 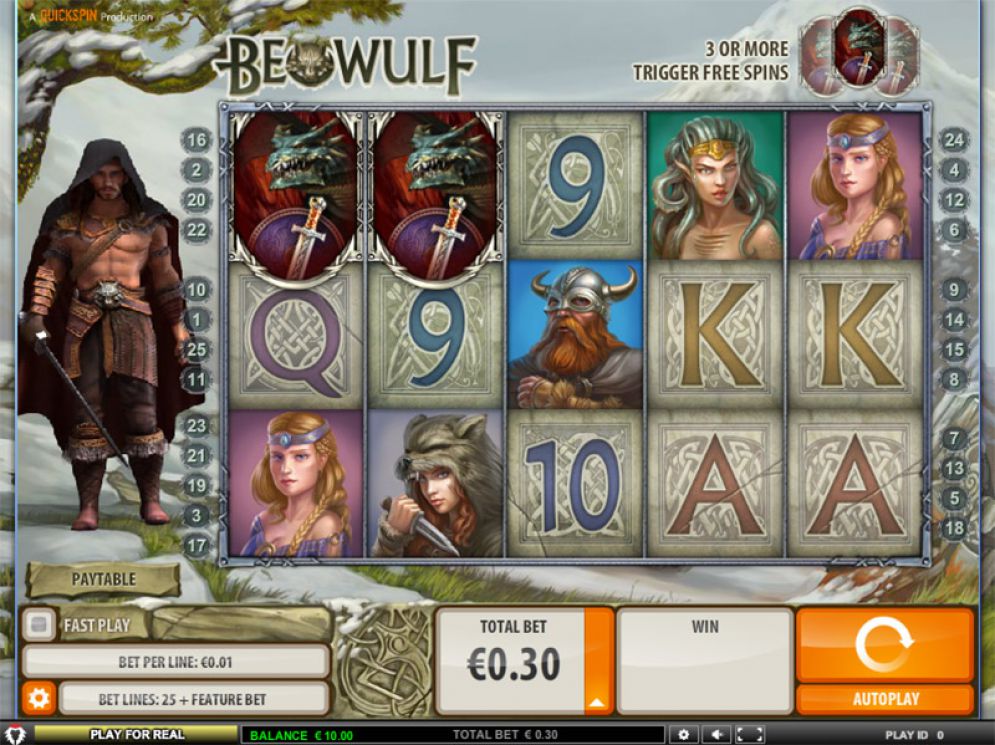 Scatter Symbol – Beowulf has a shield and two swords as its scatter symbol. Landing three or more of these anywhere in view will trigger the bonus feature for you. Scatter wins are also in play here so not only will they trigger the feature, but they also add an extra win on top of your line wins.

Bonus Symbol – It makes total sense that the extra feature is triggered by Beowulf. You will need to land the fully stacked Beowulf symbol on reel one only, to trigger the respin feature. He’s also your highest paying symbol in the game. Pay out will change depending upon the stake set at the time of the spin, so be sure to check the pay table out. Not only that, but Beowulf pays both ways when forming part of a win, left to right and right to left, just to make it a little better for you!

Beowulf Respin Feature – Triggering this feature sounds harder than it actually is. Land a fully stacked Beowulf on reel one to be allocated with x3 respins of the remaining reels. The reels will now only contain Beowulf symbols or blanks. Land new Beowulf symbols on a spin to be given an extra spin and for the symbol to be held in place. Once no new Beowulf symbols have landed the round will end and any wins will be awarded. Remember any wins with this symbol included will pay both ways, so this feature has the makings of huge potential wins. If you manage to fill the entire reels with Beowulf you will win a whopping x100,000 your bet amount!

Bonus Spins Feature – As if the epic respin feature wasn’t enough, there is also the bonus spins to aim for too. Land three or more of the shield and sword scatter symbol anywhere to trigger this feature. You will be allocated with your bonus spins which depend on the number of scatters that landed when the feature triggered.

Bonus spins can be retriggered within the round and the Beowulf Respin feature can also be triggered here too!

What we like most about the Beowulf slot is the fast paced feature triggers. When you want something to play to fill in time there’s nothing worse than waiting ages to trigger features. But with this game that’s not the case. The respin feature happens often and it doesn’t take too long to trigger the bonus spins either. Not only that, the wins happening in both the main and bonus game are fast too. More on the lower end of the pay scale, but because of the steady flow of them it isn’t something you will be worrying about.

May 29, 2018 Boku Slots Comments Off on Da Vinci Diamonds