Just when you think you have seen every possible way a slot can be set out, along comes a new game. Foxium presents the intriguing Astro Legends: Lyria and Erion, and it is definitely one you will want to try. Seemingly it is staged in outer space and at the biggest gig in the universe, so be quick and find your seats. 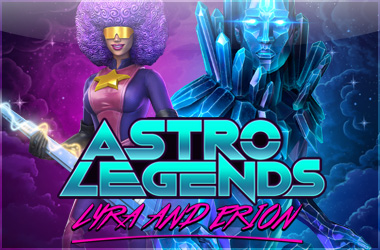 Play Astro Legends: Lyria and Erion on any of these top casino sites;

Astro Legends: Lyria and Erion is a different lay out to the usual slots you will play, and it offers a healthy RTP to the tune of 96.63%. As you will see it is set out in a pyramid style formation and it works on cluster pays instead of the usual pay line structure. Cluster pays work by symbols forming a group of at least 5 or more connecting symbols instead of lines. Your reels are transparent and appear to be floating on the surface of an alien planet somewhere in space. Lyria stands to the left of the reels playing her keyboard guitar and providing you with an electronica sounding track as the reels spin. You will notice Erion isn’t present during the main game, but watch the glowing blue hole to the right of the screen as he pops up every now and then. There is also a little meter above Lyrias head which is part of the main feature and a floating W in a golden orb at the right of the screen.  For those of you that like progression games this monitors your progress through the game and tells you what achievements have been reached.

Bet Amounts – Betting begins at just 10p per spin and can be increased to a very affordable £10 per spin. This makes Astro legends: Lyria and Erion one of the most affordable games we have played in a while. Taking into consideration the generous RTP in place too, we were not expecting such low stake costs. Amend your bet by clicking on the arrows at the side of the bet window. This will open up the bet screen and you just select from the bets on offer.

Wild Symbol – A red gemstone orb is your wild symbol on Astro Legends: Lyria and Erion and it can only land in one of the three red spaces on the reels. It will substitute for all other symbols within the game. If it lands as part of a winning combination it will offer a multiplier to that win of x2, x3, x4 and x5.

Other Symbols – There is no scatter or bonus symbol in Astro Legends: Lyria and Erion, but they aren’t missed as the features trigger easily enough without them. Symbols on the reels all take a space age theme, with red, green and blue gemstones erupting from rock making your higher value symbols. Lower values are the A, K and Q carved into space meteors and glowing pink, yellow and blue respectively. 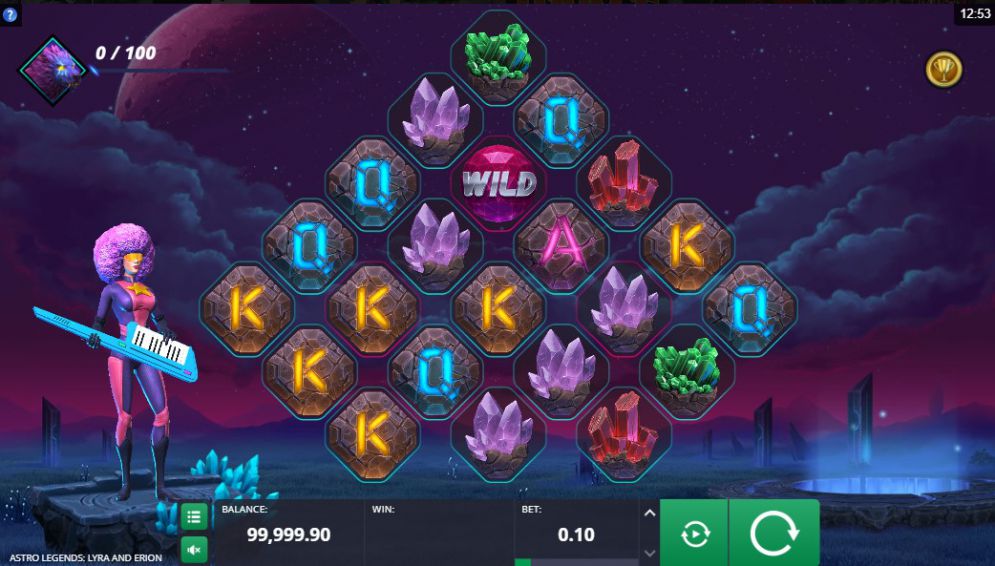 Sonic Respin Feature – Occurring at random after any win is made during the base game, the sonic respin offers a unique opportunity for players. All the symbols involved in the winning combination will be held in place. Erion will now emerge from the blue hole in the ground and turn all the other symbols into rocks. Lyria will send a sonic blast to remove the rocks Erion has placed on the reels. If new symbols are revealed that add to the cluster win then they too will be held. Once held the reels will be spun again until no new matching symbols are revealed, or the cluster has covered the whole reel.

Stardust Collection Feature – This is where the little meter above Lyrias head comes into play. At any point during the game a star bubble will appear on one of the symbols. Once the symbol has locked into place on the reels, the bubble will float toward Lyria and she will pop it. As it pops it will reveal a number and that number will be added to the meter above her head. Once the meter reaches 100 points, Lyria will turn into a wolf and you will have triggered the main feature.

Lyra Spirit Feature – Ok, so you have collected your 100 points in the meter, what now? Well now Lyria will transform into a wolf and Erion will emerge from his home below the surface. Wolf Lyria will have three lives and a choice of three tracks for her to run across, each of which has three levels to get through. As wolf Lyria runs the track she will collect the gems that are in her path and each gem will award a coin win. But Erion is there to try and beat Lyria, he will on levels 1 to 3 of each track randomly hit one of the three paths. On levels 4 to 7 he will randomly hit 2 of the 3 paths, but if the path the wolf is on is one of the ones hit by Erion, a life is lost. The game will continue until the wolf has lost all lives or made it through to the last level. If you still have lives left at the end you will be awarded an extra win to the value of x20 your bet, on top of everything you have collected.

Astro Legends: Lyria and Erion is an epic game full of interesting twists. The only downfall the game has is its slow pace as it plays out. It takes a long time to fill up the stardust meter which in turn triggers the bonus game. We now understand the reason behind the low stakes, as it could be quite detrimental on your balance to play this game for the length of time required to trigger the main feature. On the upside the respin feature triggers often in the main game and that is the saving grace of the whole game. We also enjoyed the fact that although the wild symbol can only land in the three designated cells, if you land all three in a winning combination you claim all three multipliers!