Beach front games are always a hit with players, maybe it’s the small glimpse of sunshine and hopes for the summer we aren’t sure. What we do know is that when you combine Hawaii, slots and features, it is a winning combination. Iron Dog Studios have done just this and developed a stunning game called Wai Kiki for you to enjoy. 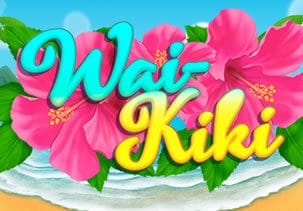 Play Wai Kiki on any of these top casino sites;

Wai Kiki is a 5-reel, 25 fixed pay line slot that offers an RTP of 96% for everyone attending the luau. Let’s don those grass skirts, leis and sunglasses, and get those reels spinning. As your reels spin against the seaside background there is a lovely Hawaiian sounding track playing along, which really helps in setting the mood. A surfboard to the right of the reels and a beach winding off to the left really gets you in the mood for summer that’s for sure. Symbols float on the screen and include a variation of things you would associate with Hawaii. Higher value symbols include a left and a right facing ukulele, a fish hook, turtle, cocktail, and a surfboard. With lower values being the A, K, Q, J which have all been built from wood and painted in bright summer colours.

Bet Amounts – Betting begins at just 25p per spin and can be increased up to the very affordable £25 per spin. making Wai Kiki one of the better games for people with low balances to play through. Amend your bet by clicking on the coin icon at the bottom of the reels and adjusting your bet with the arrows until you are happy.

Wild Symbol – A pink hibiscus, Hawaii’s official state flower is the wild symbol in Wai Kiki. It will land on any reel but only after the spins are completed. It substitutes for all other symbols and once it lands, will help to form different types of win combinations. Read on below for more information on the wild modifier feature. 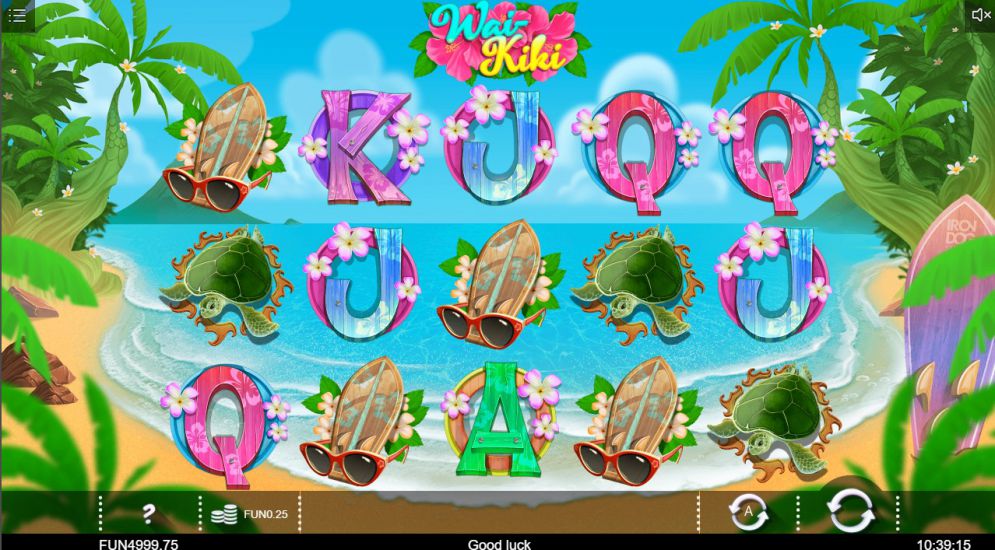 Scatter Symbol – Your scatter symbol on Wai Kiki is the multi hibiscus flower that says luau on the front of it. Instead of needing multiple scatter symbols to trigger the feature, you only need to land one on the centre reel. But it needs to have one of each ukulele on either side, a left facing one and a right facing one.

Wild Modifier Feature – If a turtle symbol lands on the centre position of reel 3 and a wild appears above it, this feature is triggered. It will immediately turn into a scatter symbol and pay out a x100 instant coin win.

Turtle Bonus Feature – Should you land a turtle symbol in the centre of reel 3 with a fish hook on either side, then you will trigger this bonus. You will now enter the shark fishing game and will need to try and catch the sharks to bag one of the random prize amounts.

Bonus Spins Feature – Having landed the luau scatter symbol on the centre reel with a ukulele on either side, you will enter the bonus round. Here you will be allocated with 21 bonus spins to play through. At the side of the reels you will see a tiki mask, which is there to collect tokens when they land on the reels. When the cocktail symbol lands, it will turn into a tiki token and will be fired into the tiki mask at the side of the reels. As the token meter fills up there will be a prize amount that increases as the tokens do and this prize will be awarded at the end of the round. During the round you will see that instead of the pink hibiscus, there is now red and yellow flowers that appear after every spin. They can expand to a maximum of five other symbol positions turning those wild too.

What we love about Wai Kiki is that it gives us a little bit of summer sun all year round and who wouldn’t want that? On top of that there are some pretty solid features that are geared at getting you the best potential wins possible. The shark game is an interesting addition and certainly ramps up the fun somewhat. Wins occur on a fairly good ratio in the base game, but when you manage to land those 21 bonus spins expect to be blown away. Iron Dog Studio have developed a compelling and entertaining slot game in Wai Kiki, that is set to be a crowd pleaser all year through.