Although we at Boku Slots don’t know much about 1×2 Gaming, we were intrigued by everything we had heard about the Mayan themed Aztec Secrets. Does it offer bonuses and extra features, and what treasures will be revealed! 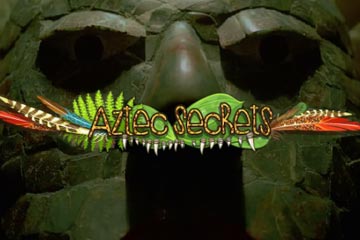 Play Aztec Secrets on any of these top casino sites;

Aztec Secrets is a 5-reel, 25 pay line slot offering an epic 97.5% RTP for its players. The game is set against a bright and cheery backdrop surrounded by bamboo frames, suggesting an Aztec campsite of sorts. The music that plays in the background can tend to be a bit overpowering, as it involves what sounds like jungle drumming. We switched it off after a while as it became distracting from the game itself.

Bet Amounts – Betting on Aztec Secrets begins at 1p per pay line in play, so with all 25 in action it makes your spin just 25p which is nice and easy on the pocket. You are able to adjust the pay lines in play, the coin value and the coin level as well, so you can really personalise each bet before you spin. The maximum you can bet is £62.50, so always be sure you have amended your bet to suit your current balance and needs.

Wild Symbol – Aztec imagery forms a major part in this game and your wild is depicted by a section of ancient Aztec masks, all on one symbol. This will substitute for any other symbol except the scatter and the bonus. The wild will also only appear on reels 2, 3 or 4.

Scatter Symbols – Your scatter is depicted by another Aztec symbol, the blue animal mask and landing 3 or more of these will trigger the bonus spins for you. The scatter will also award a high coin win of 750 if you land 5 on an active pay line, this is the second highest paying symbol in the game. 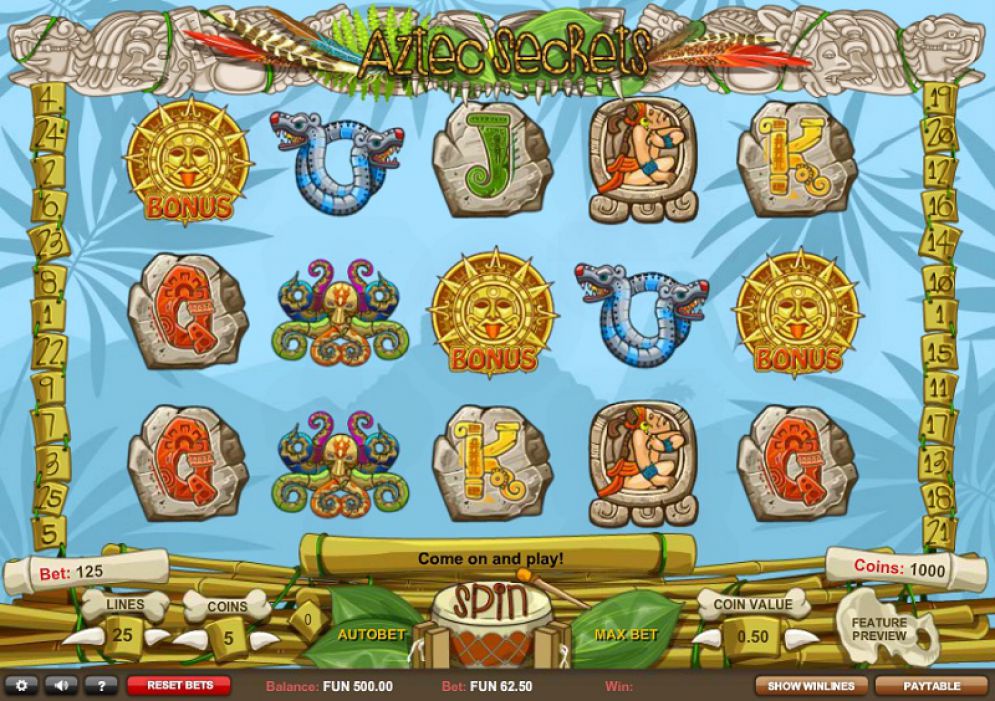 Bonus Symbol – In Aztec Secrets there is also a bonus symbol too, which is depicted by the Sun symbol. You will trigger the bonus feature if you land three of these symbols anywhere on the reels. This is also the highest paying symbol in the game, offering a huge 800 coin win if you land 5 on a winning line.

Bonus Spin Feature – Having landed three or more scatter symbols, you will be allocated 10 bonus spins. All of the prizes won during the bonus spins round are instantly doubled. Unfortunately, you can’t retrigger the bonus spins in this game.

Sun Bonus Game – To trigger this you have to land 3 or more sun bonus symbols anywhere on the reels. You are taken to a new screen and faced with a large mask and some stones. The aim is to pick a stone to throw at the mask and if you hit it, you will receive gold coins dispensed from the mask. Nice and simple, which is what you want from a bonus game really isn’t it?

This is the first game we have seen from 1×2 Gaming, but we already can’t wait to try out some more. Well put together, with a great return for the players and wins triggering often. The only downfall is the bonus spins can’t be retriggered during the feature, but we have the sun bonus game to replace that. Overall Aztec Secrets is an engaging slot that kept us entertained for a while and we hope you enjoy it too.