Boku Slots is taking a ride on the wild side with Drive Multiplayer Mayhem the fast-paced game from NetEnt. Once again NetEnt have created insane graphics, wild features and a game so fast it will make your head spin. Players are you ready, get set, and go, go, go. 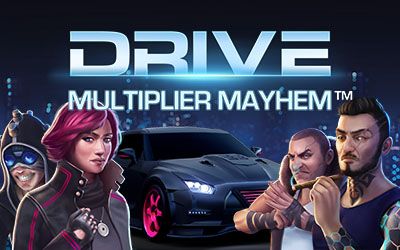 Play Drive Multiplayer Mayhem on any of these top casino sites;

Drive Multiplayer Mayhem is a 5-reel, 15 pay line game offering an RTP of 96.7%. This combined with the interesting graphics, fast multipliers and brilliant bonuses, means you are sure to have a great time.

Bet Amounts – Betting begins at 15p per spin or 1p per pay line, which is great for those spend thrift players. You can increase your spend up to £75 per spin if you wish, just be sure to amend the coin level and value before you start.

Wild Symbol – Your wild symbol looks like a rev counter found in a car, which on Drive Multiplayer Mayhem is quite appropriately themed. However, these wilds have a twist, because you can land a wild on reels 1, 2, 3, 4 or 5 and the wild will multiply your win by the number reel it lands on. So, if your wild lands on reel 5 you will have a x5 multiplier, reel 2 will be a x2 multiplier and so on.  It substitutes for all symbols except the scatter and the nitro symbols.

Scatter Symbol – The scatter is depicted by what looks like a hooded character. Land 3 of these on reels 2, 3 and 4 and you will trigger the bonus spins feature. 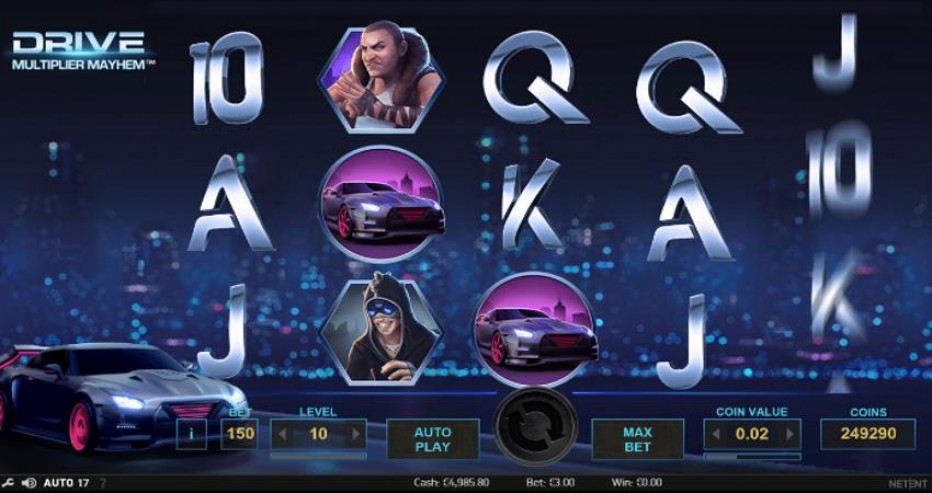 Nitro Symbol – This symbol is only in play during the bonus spins feature. By collecting nitro symbols you will step up levels and receive extra bonuses within the feature game. If a nitro symbol lands on the same spot as a wild, it will count as both a nitro and a wild.

Bonus Spins Feature – Having landed three scatter symbols on reels 2, 3 and 4 you will be allocated 10 bonus spins.  The reels will now have the nitro symbols included and as you land a nitro, it will be allocated to the meter at the side of the screen. You begin the feature at level one and collecting three nitro symbols moves you up to the next level, where you will receive extra bonuses as shown below:

Fast cars, fast bonuses and an exhilarating sound track, that would give the fast and the furious something to think about. NetEnt do this time and again, and yet we are always in awe of what they create for their players. The wins are triggered often and the features are interesting enough to keep the players boredom at bay. We can see why players of all ages are loving Drive Multiplayer Mayhem.