Age of Gods: Furious 4 slots is another addition to the incredible Age of Gods series. Of course, we at Boku Slots are fans of the other games, but have Playtech created another Greek masterpiece? 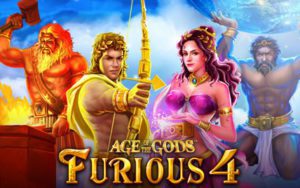 Play Age of Gods: Furious 4 on any of these top casino sites;

Age of the Gods: Furious 4 is a 5-reel, 20 pay line slot game that offers an RTP of between 93.88% to 94.88%. You will also be able to play one of four bonus spin games and enjoy that regular progressive jackpot as well.

Bet Amounts – Betting begins at just 1p per pay line and can be increased to £5 per pay line. You can increase or decrease the pay lines as you wish, meaning spins can range from 1p per spin if only playing 1 line up to £100 per spin if playing all 20 at £5 per line. Always make sure you have amended the pay line and bet amounts to suit your requirements before you hit spin.

Wild Symbol – The wild symbol is the golden number 4 emblem and it substitutes for all symbols except the scatter. It is also the highest paying symbol on the reels, so land five of these on an active pay line and you will win 10,000 coins.

Scatter Symbol – Your scatter symbol is the golden throne and by landing 3 or more across the reels, you trigger the bonus spins feature which has an interesting twist.

Other Symbols– The main symbols in pay out order are Apollo, Pandora, Hephaestus, Atlas, A, K, Q, J, 10 and 9. Apollo being the highest and 10/9 being the lowest. 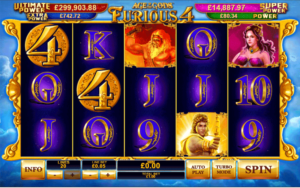 Bonus Spins Feature – Once you trigger the spins feature you will automatically receive 12 spins. This in itself is acceptable enough, however, Playtech like to give you a little more. So, if you land one of the four gods featured in the game on reel three during the feature, you will receive a little bonus.

Progressive Jackpot – As you are probably aware now with all Age of Gods games, there is a randomly awarded progressive jackpot feature. When it triggers you will see a screen filled with gold coins and four power jackpots. These are Ultimate power, Super power, Extra power and Power. There are spaces for three symbols under each jackpot. You click on coins revealing symbols until you have three matching and you then win whichever jackpot they are connected to. Very simple and a guaranteed jackpot win. What’s not to like?

You would think that these games would have become boring and monotonous by now but its rather the opposite. Although the progressive jackpot is the same with every game, there is a slight variance on the bonus features and re-spins games which is just enough to keep players old and new excited. Yes, the RTP is low on Furious Four, however we feel that it still pays out well compared to other games with a similar RTP. Overall game play on Age of Gods: Furious 4 is fun and easy, the graphics are bright and cheerful and we will come back to this time and again.