Join Age of Gods: Prince of Olympus as he plays the reels in search of rewards. Boku Slots found that this addition to the Age of Gods series was a little more extravagant in design, with bold opulent colours and graphics throughout. But does it stand up against its predecessor or will it fall by the wayside? 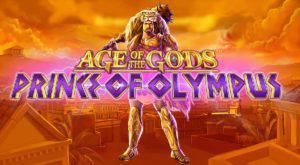 Play Age of Gods: Prince of Olympus on any of these top casino sites;

Age of Gods: Prince of Olympus is a 5-reel, 25 pay line slot game featuring the legendary Hercules. Alas, the RTP is not of herculean strength and only offers between 93.83% to 94.82%, but with the extra bonus game that’s been added we think that makes up for it.

Bet Amounts – Betting on Age of Gods: Prince of Olympus begins at 1p per pay line and can be increased to £10 per pay line giving quite a variance in stake amounts. You can alter the lines in play as well, ranging from 1 pay line to 25. This means you can play from as little as 1p per spin to a maximum of £250 per spin. Make sure you always check your pay line choice and bet amount before hitting spin.

Wild Symbol –  Hercules covered in a lion skin is your wild symbol and he will only appear on reels 2, 3 and 4. The wild substitutes for all other symbols except the scatter and the bonus symbols.

Scatter Symbol – Again, Hercules is the scatter symbol, except this time it is his name emblazoned across a red background. Land three or more scatter symbols anywhere on the reels and you will receive ten bonus spins. But there is an added extra twist to the bonus spins which you will read about later.

Bonus Symbol – Prince of Olympus offers an extra bonus game. To trigger the Hydra bonus, you only need to land one hydra symbol anywhere on the reels.

Hydra Bonus Game – Once you have activated the hydra bonus you will be taken to a new screen, where Hercules will be faced with a hydra. You need to pick three heads to have Hercules attack, which will give you a cash amount. A fourth head gives you the multiplier by which that amount is increased by. There is a twist here too, if you land the rage feature within this game all the heads will explode, randomly creating a bigger win. 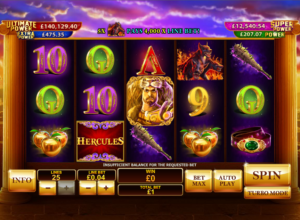 Bonus Spins Feature – By landing three or more scatter symbols you trigger the bonus spins feature. You will automatically receive 10 spins when entering the feature. The spins can be retriggered during play, so watch out for those scatters landing on the reels. All wins are tripled during the re-spins feature.

Progressive Jackpot feature – As will all Age of Gods games, there is a progressive jackpot where you can win one of four jackpots available. The Ultimate, Super, Extra or Power jackpots have three symbol spaces available and you need to click on coins until you match three symbols. The symbols that match will win you the correlating jackpot. You are guaranteed a win when entering this feature.

Herculean Strength Feature – This is a special feature centred around the legendary Hercules himself.  There are two versions of this feature that can be triggered;

It may have a lower RTP, but boy does Age of Gods: Prince of Olympus have a lot of other things to offer in its place. With three different bonus features and a progressive jackpot, you are more likely to trigger these and win smaller amounts which all add up. It’s bright and cheerful and who doesn’t like a good Herculean game to play on? Overall we can see why many people prefer this slot to the others within the series, as it definitely has a lot to offer players of all ages and pockets.