Lots of tales have come out of Egypt and almost all of them have found their way into some kind of slot design over the years. This next game however has taken a different turn with the Egyptian theme. NextGen Gaming have decided to forgo the tales of old and revamp the age old hieroglyphs with a modern neon twist. Join us as we watch a new trend being born in Egyptian Rise and who knows, maybe the gods will be smiling on you as you play? 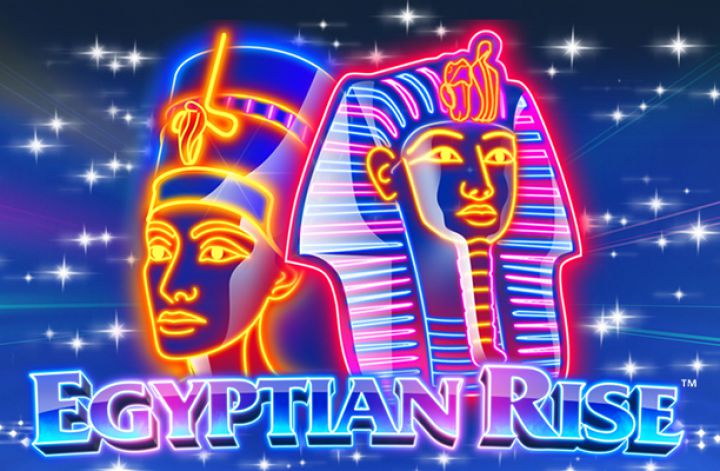 Play Egyptian Rise on any of these top casino sites;

Egyptian Rise is a 5-reel slot offering 243 ways to win, with an RTP of 97.76% which is an epic return for players. The entire game is a bright, colourful feast for the eyes, with the reels and symbols all glowing in neon colours. Playing away as the reels spin is a distinctly Egyptian feeling music track, however after a while it gets a bit distracting, so we just advise switching off the sound.

Bet Amounts – Betting on Egyptian Rise begins at 40p per spin and can be raised up to the maximum of £40 per spin. If you need to change your bet there is a coin symbol which is attached to the left of the spin button. Clicking this icon will open the bet screen and you will see a sliding scale that you can adjust, until you reach your desired bet amount.

Wild Symbol – A scarab and pink flower make up your wild symbol in Egyptian Rise. It will appear on all reels and will substitute for all other symbols in the game too. The scarab wild is also the highest paying symbol in the game, offering a x500 coin win for landing 5 on a winning line. 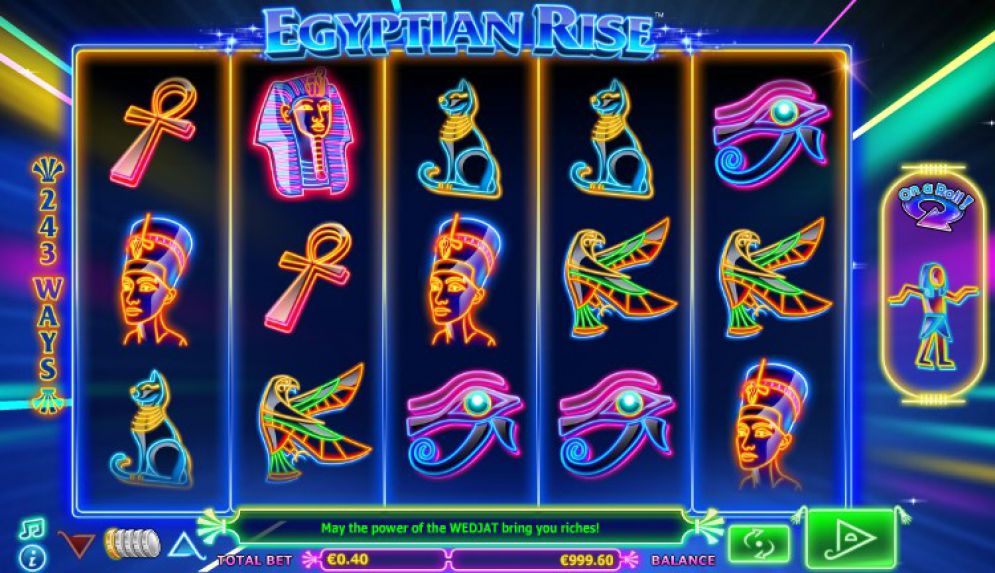 Other Symbols – There are no scatter or bonus symbols in Egyptian Rise, as the two features are triggered by landing wins and triggering respins which will be explained below. All the other symbols in the game are neon versions of Egyptian designs. In order from highest paying to low we have a pharaoh, a goddess, an eagle, the eye of Ra, a sphinx and an ankh symbol.

On a Roll Respin Feature – This is a very interesting feature on Egyptian Rise and it also leads into the main bonus spins too. After each winning spin you will be awarded one respin with an extra wild added to the reel. On each subsequent win you will receive another respin and more wilds added to the reels.

Respins and wilds will be added until the 4th consecutive wins is landed. At the side of the reels you will see the meter light up after each win and respin is issued. When you reach the top of the meter on the 4th respin, you will then enter the Pharaoh Feature.

Pharaoh Feature – Instead of having to land symbols in certain places or amounts to trigger the feature, you simply need to land 4 wins in a row with the on a roll feature above. It sounds impossible, but it is achievable, especially with the addition of the extra wilds on each consecutive win/respin. Once you hit the 4th respin you will then enter the bonus spins round. Once again NextGen Gaming have changed the rules, because instead of having a spin total you have a loss total. This means that you will continue to have spins until you reach 3 losses. At the side of the reels you will see a pharaoh meter with three tokens inside. On each loss a token is removed and the bonus spins end when all three tokens have been removed from the meter. During the round an extra 5 scarab wilds are added to the reels, on top of the wilds that you accumulated during the on a roll bonus as well.

What we love about Egyptian Rise is the ingenious way the features are triggered. Making this game easier to play, as the features trigger with wins and not with having to land symbols. If you can land just 4 wins in a row you are straight into the bonus spins. Once inside its all about keeping that winning streak going, because if you land 3 losses you are back to the main game and waiting for those 4 consecutive wins to land again. It seems like a vicious circle but actually it makes for a much more enjoyable game and it’s appealing for players of all pockets and experience.

October 25, 2019 Boku Slots Comments Off on Vampires VS Werewolves