A tale of good versus evil always goes down well with most people and with this latest slot from NetEnt we get a glimpse into the dark underworld. Arcane Reel Chaos focuses on the story line of Don Parker who is turned evil and the four unlikely superheroes that try to stop him. Join forces with those heroes and try to relinquish Don Parkers riches from him before it’s too late! 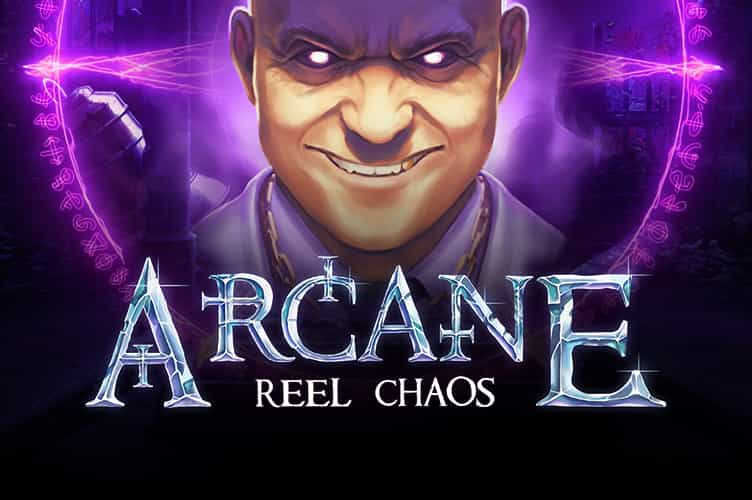 Play Arcane Reel Chaos on any of these top casino sites;

Arcane Reel Chaos is a 5-reel, 20 fixed pay line slot that offers budding heroes an RTP of 96.81%. It is set inside what looks like a bombed out church at night. All of the symbols look like tarot cards in essence and are packed full of the games characters, standard card symbols and mythical emblems too. Higher value symbols are the five main characters which are in order Don Parker, Flare, Zero.X, Chrono and Psyop. Lower values are the A, K, Q, J and 10 symbols which have all been made to look as if taken from a tarot set in design. In keeping with the dark theme there is a spooky track playing as you spin the reels, lending a great atmosphere to the game.

Bet Amounts – Betting on Arcane Reel Chaos begins at 20p per spin and can be increased up to £200 per spin. You can find the bet amount to the left of the spin button. Use the arrows on each side to adjust your bet up or down until you are satisfied with the amount showing and then just hit spin to resume the game.

Wild Symbol – Your wild symbol on Arcane Reel Chaos is a gold W on a swirling blue circular background. It can substitute for all other symbols except the scatter. The wild symbol can appear on any reel at any time and is also available in some of the feature games too.

Scatter Symbol – A gold orb wrapped inside a snake talisman is your scatter symbol in Arcane Reel Chaos. The talisman scatter symbol will only land on reels 1, 3 and 5, and landing three or more scatters across these reels will trigger the feature for you. 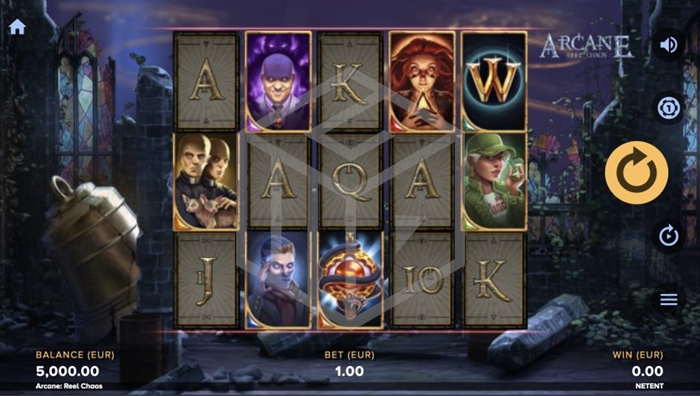 Random Features – During the base game you may be awarded one of the random features shown below. There are 4 different features available and you may be awarded any one, but each of them bring a wealth of wilds or multipliers to help the player land a bigger win. Each of the features will be triggered by a deciding factor which in this case is the type of spin that has occurred.

Bonus Spins Feature – Having landed three or more of the talisman scatter symbols on reels 1, 3 and 5, you will enter the bonus spins feature. You will enter the bonus spins round which is where the four heroes will fight Don Parkers evil personality Deep Pockets! There are 4 stages to the bonus spins round and your reels will spin until you reach the end of the fourth stage, or if Deep Pockets wins the fight. Your aim is to remove the health points awarded to the villain Deep Pockets and you do this by landing a winning combination. As you remove the required health points you will move up a level and receive a higher win multiplier.

Arcane Reel Chaos is an interesting game on many counts. The bonus spins feature is set up slightly different to the way they normally run. But we think that is what sets the game aside from others in the same genre. The game has some great animations and the addition of the voice overs from each of the characters adds a bit more depth to the plot. Wins come fairly regularly within the base game and those random features trigger relatively often as well. The bonus spins however can take some time to land, but that is made a bit easier to bear with the regular main game wins. All in all, NetEnt have outdone themselves with Arcane Reel Chaos and we wonder whether we may see these characters again in the future?