Diamonds are a girls best friend, so they say, but in this case they are fit for a queen! IGT have built the beautiful Diamond Queen slot for players to enjoy. The developers decided to go down a simple route where this game was concerned, fitting just two features into the slot and keeping things nice and easy. 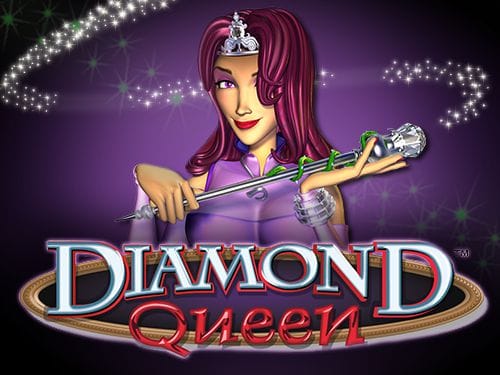 Play Diamond Queen on any of these top casino sites;

Diamond Queen is a 5-reel, 20 pay line slot that offers players a variable RTP of 92.97% to 96.08%. Your reels look as if they form some sort of scroll that is set inside a murky forest. Symbols range from characters like a wizard and the queen, to your standard playing card symbols. Instead of music backing the game, there are some pretty tinkling sounds that make you think a fairy godmother is about to appear and grant all your wishes.

Wild Symbol – The Diamond Queen herself is the wild symbol and she can land anywhere on the reels. Your queen wild will substitute for all other symbols in the game except the scatters. 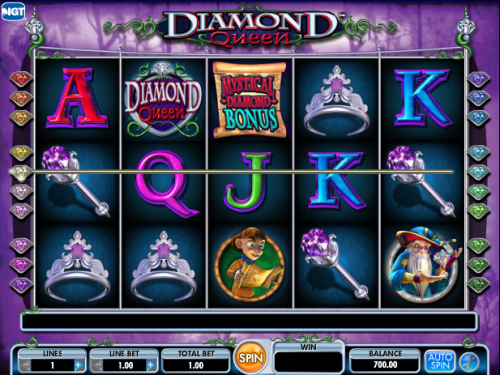 Extra Spin Feature – Triggered during the main game only, this feature awards a single respin of the reels when it is activated. To trigger the extra spin feature you need to land the scroll with the words extra spin on it, but it needs to land on reel 1. Once you have done this you will be awarded a single respin of all the reels. There is no limit to the number of times this respin can be awarded. It can also be awarded in succession, meaning if you land another extra spin symbol on the initial respin you will get another chance to respin.

Bonus Spins Feature – To enter the bonus spins feature you need to land three of the mystical bonus scroll symbols on reels 2, 3 and 4. After you do this you will be awarded x3 bonus spins to play through. However, it doesn’t stop there because on each spin you are awarded some little extras as explained here:

Despite only having three spins in the round, there is huge profit potential thanks to those wild reels. The other thing you need to be aware of is that during the bonus spins, all symbol pay-outs are increased as well. Be sure to check out the pay table when you first begin the game to see how that works.

Diamond Queen may only have two features, but that doesn’t impact the overall playability of the game. There are plenty of main game wins to be had regardless of how high you are betting. If huge bonus spin amounts are what you look for, then you are not going to get that here. But, what you will get is an increasing wild symbol count as the spins progress. This means that by spin three you have three reels of wild symbols ensuring you land a pretty big win on that final spin. Luckily for players those bonus spins are triggered faster than you would think. Overall, Diamond Queen doesn’t have much going on, but what it does have more than makes up for what it lacks!