Barcrest are a well-known name in the slot community and they have created some of the best slot games we have seen. Their Wild Times slot has people flocking to it time and again, so we wanted to see why? Join us as we look at the features included in this slot and hopefully bag some winnings in the process. 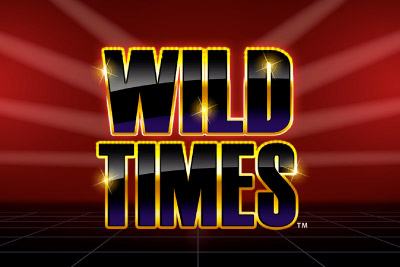 Play Wild Times on any of these top casino sites;

Wild Times is a 3-reel, 5 fixed pay line slot offering a variable RTP of 94% to 98%. Almost reminiscent of slots gone by, Wild Times is a basic retro slot with a modern twist. The reels themselves are set against a red backdrop and the symbols are old school.

Bet Amounts – Betting on Wild Times begins at 10p per spin and remarkably can be increased up to a massive £500 per spin. Amend your bet by using the plus and minus symbols above and below the bet amount at the side of the reels.

Wild Symbol – Your wild symbol is the word ‘wild’ on a red and gold background and it will substitute for all other symbols. But the wild symbol will only appear on reels 2 and 3.

Scatter Symbol – There is no scatter symbol in Wild Times, which can put some people off. But Pragmatic Play added a little twist here and instead of a scatter, the feature is actually triggered by the wild symbol.

Wild Multiplier Feature – Every time you land a win that is formed with a wild symbol, you will trigger the wild multiplier. The wild symbol will now transform into a wheel of fortune and will begin to spin. Once it stops spinning it will reveal a win multiplier for the win it is forming. Multipliers available are x2, x3, x4 and x5 the win. If you are lucky enough to land x2 wild symbols in a winning combination you trigger the super wild win. This means that whatever multiplier is revealed by the wheel of fortune spin will then be doubled again!

Big Bet Feature – You may notice at the side of the reels a button labelled ‘BB’ this activates the Big Bet Feature on Wild Times. There are four different levels in this feature, each one with asset stake and extras awarded to it. You need to choose which level you want to play and make sure it is right for you by checking out the information below. Now you will be awarded a number of spins for that set stake amount. As well as this you are also awarded 27 pay lines during your big bet round. But it doesn’t stop there, your wild multiplier feature is increased in value too.

Once you have played through your x5 big bet spins you will be given the choice to play again, to change your big bet or to return to the main game.

Wild Times may look on the surface to be a dull old school themed slot, but once you enter the game and begin spinning that’s when things change. The big bet feature and wild multiplier make for a very entertaining and exciting game. Considering it is only three reels and 5 pay lines we thought we would bore easily and in fact quite the opposite happened. Our main advice would be to avoid betting as high as £500, because it has no sustainability factor. Besides which the wild symbol triggers the feature whether you are betting high or low. So there really is no need to bankrupt your balance, and there is always the big bet feature to take advantage of instead.