If you love all things Egyptian, then this next game is a must play. Genesis Gaming are responsible for this well-designed slot which they have called Gods of Giza. Taking inspiration from hieroglyphics and art found in Egyptian culture, it makes for an appealing game all round.

Play Gods of Giza on any of these top casino sites;

Gods of Giza is a 4-reel, 20 pay line slot offering an RTP of 96.13%, across a 4×4 lay out that you don’t normally see. All the symbols have been given a bit of an Egyptian edge, with lovely script work on the lower card symbols and over embellished Egyptian symbols such as the pharaoh, his wife, the scarab and of course those Gods of Giza; of which there are two. Whilst the majority of the slot is very much aimed towards a celebration of the culture in Egypt, the music that plays as the reels spin feels a little out of place; so much so that we switched it off as it was very off putting.

Bet Amounts – Betting begins at 20p per spin and can be increased to a huge £200 per spin. Be sure to amend the bet amount before hitting spin, or you will be in for a shock if you are betting too high. 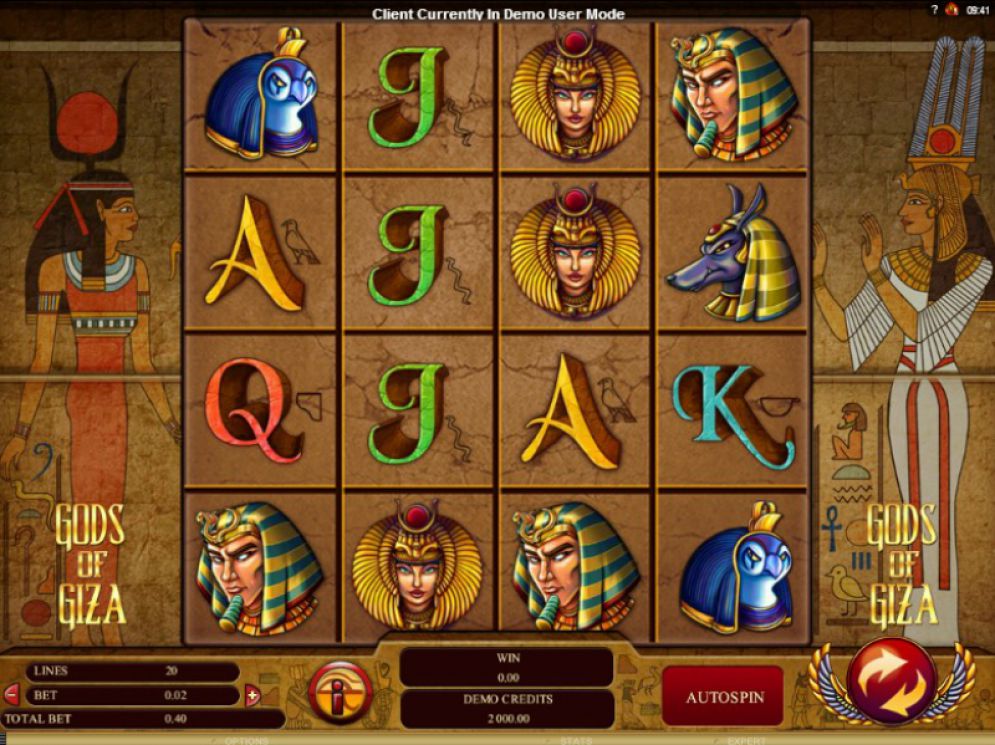 Wild Symbol – The extremely elaborate scarab beetle is your wild symbol and it will substitute for all other symbols except the scatter. It is also your highest paying symbol in Gods of Giza, offering a x250 coin win for landing 4 in a winning combination.

Scatter Symbols – A golden ankh is your scatter symbol, not only will landing three of these trigger the insane bonus spins round. But, you will also receive a great pay out for the scatter wins, as well as your line win. 3 or more scatters anywhere in view will award those scatter wins and will pay up to 16 scatters in view. Whether you get 16 which is a scatter on every available reel remains to be seen, but you never know with games like this.

Rotating Spins Bonus Feature – So, having landed three scatters you will enter the bonus round. you will be awarded 8 bonus spins of the reels but with an added twist, literally. On each of your spins the reels will rotate four times and as they do new wins will be created, not every time but enough to make you forget this is the only bonus. If you figure in 8 spins of the reels and four rotations per spin, this makes 32 chances for new wins to be made during the bonus round.

Whilst looking good and delivering an amazing singular feature, Gods of Giza just seemed to be missing something for us. Enjoyment wise the game was interesting enough, but the wow factor just wasn’t there. Wins were fairly regular in the main game though usually smaller values, because the big wins were held in the rotating spins bonus. Despite all this we feel that most players will enjoy the slower pace that Gods of Giza offers, combined with the prizes on offer in the bonus.

April 15, 2020 Boku Slots Comments Off on Wheel of Wishes