If you loved the movie a Bugs Life then you will love this game, Boku Slots certainly did. Created by Blueprint Gaming, Wild Antics centres around an ant colony which offers a lot more than you would imagine. 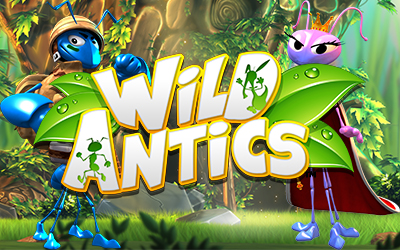 Play Wild Antics on any of these top casino sites;

Wild Antics is a 5-reel, 20 fixed pay line slot that offers players an RTP of 95.51%. As you can imagine from the brief description above, the theme of the game is bugs. So, the reels are set against a garden background with symbols ranging from rather quirky looking bugs, to cartoon styled card values.

Bet Amounts – Betting begins at 20p per spin and can be increased to a maximum of £500 per spin. Whilst the higher end of the stake amounts seems a bit out of reach, there are plenty of stops in between making it affordable for all pockets across the board. Just be sure you have made the correct amendment before hitting spin.

Wild Symbol – A blue ant inside a flower is your wild symbol and it will substitute for all other symbols except the bonus, of which there are five on offer. It doubles up as your highest paying symbol as well, offering a x500 coin win for landing 5 in a winning combination. 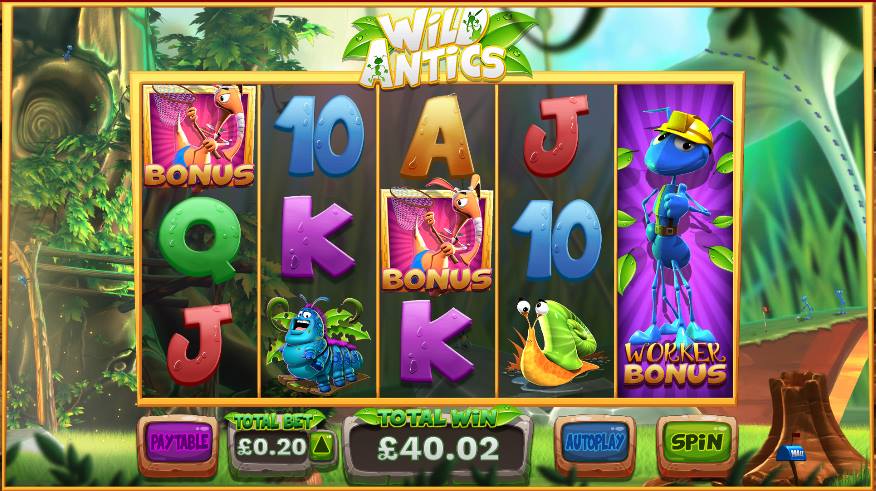 Matching Bonus Feature – To trigger the bonus games you need to have two aardvarks and one of the other symbols. Whichever symbol you land on reel 5 will dictate the bonus game that you play:

At the end of your bonus round you may be awarded one of the jet pack antics features at random, and the round could well be retriggered so keep those fingers crossed.

Jet Pack Antics Feature – This feature triggers at random, so you may see these little ants pop up at any time during the main game or the bonus:

Though it seems complicated, Wild Antics is still super fun to play and watch. You will at times see the ants and aardvarks running around the reels which makes things interesting. The features are many and though it can take some time to understand, once they are actually in play they are very rewarding. Overall, Wild Antics is a great game to while away some time and will be something players of all abilities and pockets can play.