Usually when you see a vampire themed game it centres around the general characterisation of Dracula himself. However, Playtech have taken a different stance here and gone with the untold story of Vampire: Princess of Darkness instead. Watch out for things that go bump in the night and of course bats that turn into blood sucking monsters in the darkness! Are you ready to take on the princess of darkness and try to steal back the riches she holds inside the castle walls? 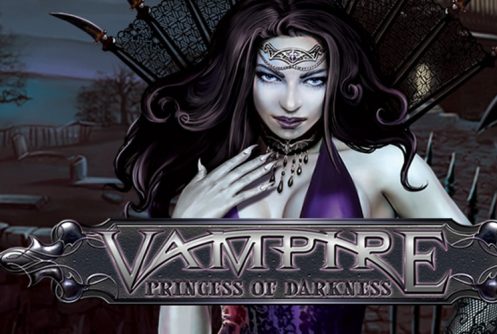 Play Vampire: Princess of Darkness on any of these top casino sites;

Vampire: Princess of Darkness is a 5-reel, 5 fixed pay line slot, offering an RTP of 96.44% for you to sink your teeth into. There is a distinctly dark look to the game as it is set at night. The reels spin inside what we can only assume is meant to be a spooky graveyard, surrounded by twisted trees and mist, with the vampire’s castle in the distance. Whilst the game is in play there is a spooky soundtrack playing along, which makes you feel as if something is going to jump out at any minute.

Bet Amounts – Betting on Vampire: Princess of Darkness begins at 5p per spin and can be increased up to £100 per spin. You can only change the bet per line in this game. To do so use the plus and minus symbols in the line bet section and this will amend your total bet amount.

Wild Symbol – Your wild symbol is the princess of darkness herself, so keep watch for her landing on the reels. She will substitute for all other symbols in Vampire: Princess of Darkness except for the scatter.

Scatter Symbol – A gravestone and roses is your scatter symbol on Vampire: Princess of Darkness and it will only land on reels 1, 3 and/or 5. Landing a scatter on each of those reels will trigger the bonus feature for you. 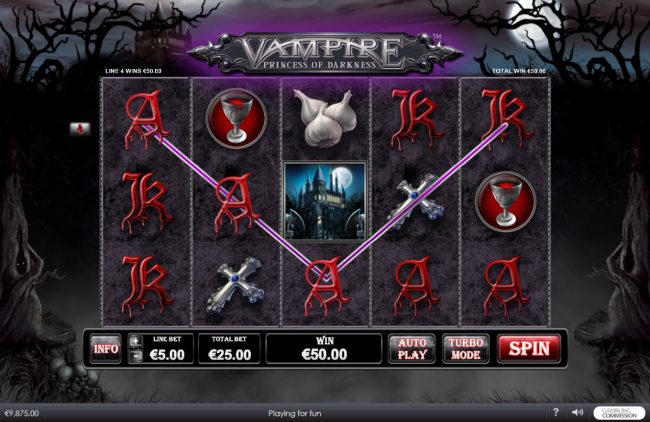 Other Symbols – Symbols are all in keeping with the general feel too, with some symbols drawn in blood. Higher values include the castle, bat, chalice and the cross, with lower values being the garlic, A and K symbols.

Graveyard Feature – Having landed a gravestone scatter on reels 1, 3 and 5 you will trigger the bonus feature. You will now be taken to a different screen and see some rows of gravestones waiting for you to pick from. There are 5 rows in total, the first row containing 6 stones which will each reveal a prize sum beneath them. Once you have picked a gravestone from the first row you will move to the next which holds only 5 stones. But now each of the remaining rows will contain the ‘collect’ symbol as well as prize amounts. So, you need to pick wisely in order to move up the rows and ultimately land at the last largest gravestone, which awards the biggest win of the feature. Land on a collect symbol on rows 2, 3, or 4 and you will be returned to the game with the winnings you have accrued so far.

Vampire: Princess of Darkness is a fairly simple game with a single feature, yet despite this it is highly popular with players. It has an ease to its playability which is part of the draw, but the wins in both the main and bonus game are the reason many people come back time and again. During the main game you will find lots of smaller pay out wins, with the addition of a rare big win when those castle symbols line up for you. Get into the bonus game however and this is where the biggest money can be found. Add to that the intense graphics and horror theme and you have a game that will appeal to more than just the horror fans.