The Griffin is a mythological creature combining the top of an eagle and the bottom of a lion, creating a brave and regal beast. What does this have to do with online slots we hear you ask? It’s simple, the team at Microgaming have developed a whole slot based loosely on the myth that is the Great Griffin! 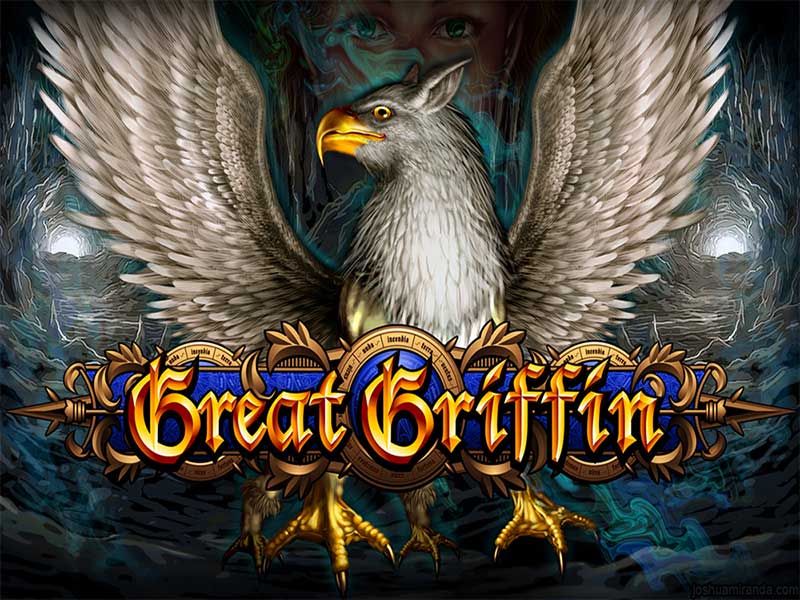 Play Great Griffin on any of these top casino sites;

Great Griffin is a 5-reel, 50 pay line slot that offers players an RTP of 96.79%. Set out in an almost gothic looking frame, the reels spin away covered in symbols that have a very distinct theme running through them. That theme being magic and mythology, including lots of well-drawn and beautifully coloured symbols.

Higher values being depicted by the griffin’s claw, a pink gem stone, a griffin’s egg, burning candles, a spell book and a set of potions. Lower values symbols are depicted by a mortar and pestle, a sapling tree, a set of scales and a feather. As the reels spin there is a very ominous low sound playing and then rather short sharp sounds occur when certain symbols land as part of a win, which is quite off putting. Certainly, we would advise to play without the sound, for a more enjoyable game play with Great Griffin.

Bet Amounts – Betting begins at just 1p per line in play and can be upped to the limit of 10p per line in play. This means low cost stakes, if you are playing either single or all lines at the base bet amount. However, you can amend the cost of the lines in play, the amount of lines active and finally the coin level too. Having these options gives players a huge variety of bet amounts to choose from. Starting at 1p per spin and increasing up to the maximum of £50 per spin. We always advise you make sure that you are happy with all three settings before you hit spin.

Wild Symbol – The majestic griffin itself is the wild symbol and will substitute for all other symbols except the scatter and bonus. Any win formed using the griffin wild symbol will be doubled and your wild symbol holds yet another treat in store. Land x2 or more symbols on an active pay line to bag a prize, which is slightly different to the way wild symbols work in most games. Land x5 though and bag yourself the highest pay out of x5000 coins as a prize.

Scatter Symbol – Your scatter symbol is the Great Griffin logo and landing three or more of these symbols anywhere in view, will trigger the bonus spins. Scatter wins are allocated also, giving an extra prize win on top of any line wins landed on the spin.

Bonus Symbol – A hooded lady is your bonus symbol in the Great Griffin, and she will only appear on reels 2, 3 and 4. Land three of the bonus symbol on those reels to trigger the bonus game and be awarded an extra win of x3 your bet amount on top of any line wins. 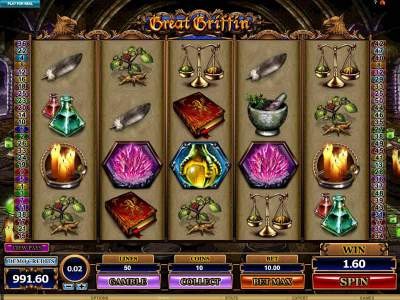 Bonus Spins Feature – Landing three or more of the scatter symbols will trigger the bonus spins round and there is an extra treat in store there too. You will now be given the choice of three spin options and each one has a special multiplier.

There is also a meter at the side of the reels and every time you land x3 scatter symbols the meter will fill up with potion. If you manage to fill it before the round ends you will retrigger the bonus round. This means you will get to choose again from the three bonus spins options and start the round again. There is no limit to the amount of times this can occur, but you need to fill that potion meter in order to do this, so let’s hope the scatter symbols are landing in your favour.

What we love most about the Great Griffin is the thought that has gone into the overall design of the slot. It is extremely playable and packed with features to keep even the more experienced slot players entertained. Wins occur often enough within the base game and once that bonus round hits, you are going to be very happy there too. Choose your bonus spins option wisely, as the more spins you have the more likely you are to fill that potion meter up and retrigger the spins round. But if you are more interested in the higher multipliers for the win amounts, then go low with the spins. We love the fact that you have the choice there and the extra pick me game too. Microgaming have once again put their players at the heart of what they do and created a great game for all to enjoy.