You grew up on the legend of Robin Hood, but you have never heard the story told quite like this before! NextGen Gaming have taken this childhood favourite and given it a bit of a twist. Be warned all who enter the realms of the forest, for you may come across Robin Hood Prince of Tweets. 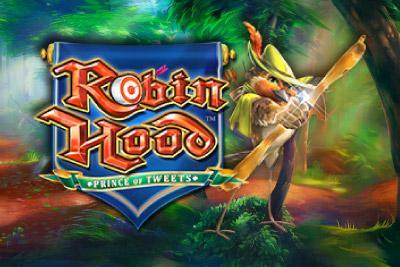 Play Robin Hood Prince of Tweets on any of these top casino sites;

Robin Hood Prince of Tweets is a 5-reel, 40 fixed pay line slot offering players a variable RTP from 93.38% to 96.97%. Your reels are transparent and spin across a forest background, with medieval music playing along as they spin. All the symbols are very cartoon like in essence and include the lovely Robin Hood himself, depicted by an actual Robin! As well as a castle, a bag of gold coins and what we can only assume is friar tuck and maid Marian in bird form, amongst other symbols.

Bet Amounts – Betting begins at 20p per spin and can be increased up to £500 per spin, but that’s not where the betting options end. There is also the superbet option which we’ll delve into below. The bet amounts shown here are with the level one superbet which is the base option only.

Super Bet Feature – At the side of the screen you will see a scroll that has the superbet logo at the bottom and the maid Marian symbol highlighted already. Superbet offers you the chance to increase your stake for extra enhancements within the game. It is already at level one when you begin to play and can be increased to level 2 or to level 3 which is the highest.

Each level comes with an increase in bet amount, so be sure you have the funds in place to allow betting at each of these levels and adjust accordingly.

Wild Symbol – Robin Hood is your wild symbol and he will substitute for all other symbols except the castle scatter. He is the second highest paying symbol of the game, offering x250 coins for landing 5 in a winning combination. But the fun doesn’t stop there, land Robin on reel 3 to activate the Robin Hood Arrow Feature. 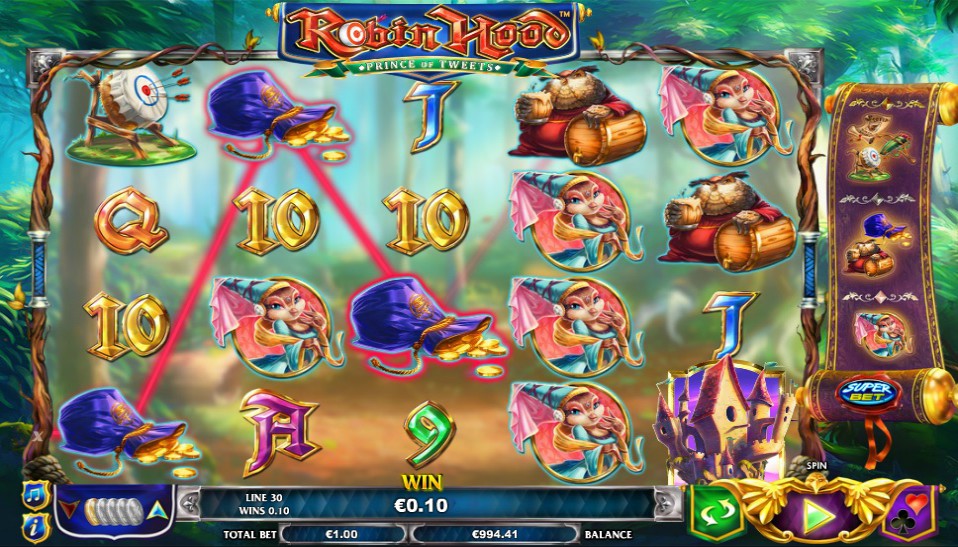 Scatter Symbol – A very wobbly looking castle is your scatter symbol and landing three or more of these anywhere in view will trigger the bonus spins. It also is your highest paying symbol as well, offering x4000 coins for landing 5 in a winning combination. Scatter wins are also in play too, so you will be paid for 3 or more scatter symbols as well as your line win!

The symbols need to be adjacent to the robin hood symbol in order to be turned wild.

Bonus Spins Feature – Having landed yourself 3 or more castle scatter symbols, you will be awarded the bonus spins as shown below. Spin can also be retriggered within the feature by landing 3 or more symbols again.

We mentioned earlier a variable RTP which comes into play when switching between the superbet options. When playing at level 1 the RTP is 93.38% and when at level 3 it is 96.97%. Robin Hood Prince of Tweets is a brilliant game with lots of exciting features in play. If you are wanting bigger wins the higher superbet option is key but be sure your balance can sustain it. Wins still happen often at the lower levels so bear this in mind.