We all know Vegas is full of bright lights and neon colours, well now you can have all that and more in the palm of your hand. Thanks to Bet Digital slots, you can enjoy everything that Vegas has to offer without leaving the country with Free Spin City. 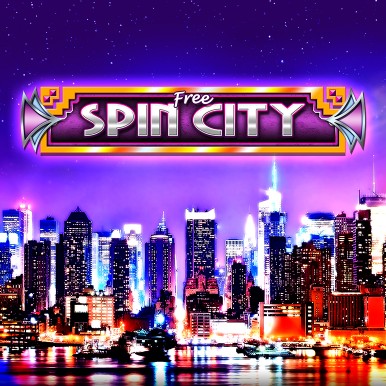 Play Free Spin City on any of these top casino sites;

Free Spin City is a 5-reel, 20 fixed pay line slot offering a meagre 94% RTP. However, there is a distinct difference with this slot over others and that is the game choice selector at the side of the reels. Speaking of reels, they are transparent and spin above a Vegas looking city scape, hosting $ signs, piles of cash and casino dice, giving an all-round casino feel to the game. The game selector at the side is depicted with casino chips as well and even the music playing along has a distinctive Vegas feel to it.

Bet Amounts – Betting begins at 20p per spin and increases to the maximum of £2 per spin with only 2 other choices in between the two. This means that whatever your budget Free Spin City is more than affordable to play for all. Your chosen bet amount is decided by selecting one of the four game choices at the side of the screen, it’s as simple as that.

Wild Symbol – The wild symbol is an art deco styled sign with the word wild across the middle. It will substitute for all other symbols except the bonus and plays a vital part in the four different game options.

Bonus Spins Symbol – Your bonus symbol again is very art deco and hosts the words Spin Bonus on a purple and gold background. Land 3 or more to trigger the bonus spins feature, this varies depending upon the game chosen as you will read below.

Game Selections – There are four main game options to choose from and each one has its own stake amount, as well as multipliers or extras. Before each spin you will make your choice from those below. We quite like the Power Spins option ourselves but it’s your choice:

Bonus Spins Feature – As you can see above with each game option there are different ways to get your bonus spins symbol in place. Once the feature is activated you will be awarded 8 bonus spins to play through, but it doesn’t stop there. Whatever main game choice you made when the bonus activates, means those extras will be in place for the bonus spins too. Not only that but the bonus spins can be retriggered during the feature too, up to a maximum of 500 spins!

Bonus Symbol Respin Feature – This is very handy for everyone playing Free Spin City. If you have only landed 2 symbols and still need a third to trigger the bonus, then it will trigger a respin of the remaining reels. This will then potentially help you land that all important third bonus symbol and trigger the spins feature.

Bonus Upgrade Feature – If you are playing either the Reel Game, Mega Spins or Ultra Spins, then you may be in luck when activating this random feature. At any point you may be upgraded to the next game level for free for one spin and then returned to your original game choice.

Wheel Bonus Feature – At the end of every bonus spins round you will be given a chance to spin the wheel. This will only happen for the first set of spins triggered, so if you retrigger the spins you will still only get to spin the wheel once. Prizes include multipliers, extra cash amounts, more spins and a collect space. Landing on collect will end the feature and place your winnings into your balance.

Spin Again Feature – After any reel spin you may be allocated the spin again bonus. All the reels will spin again and hopefully award a new win for you, at no extra cost.

Playing Card Feature – After a win is made you may be offered this feature to increase your win. If triggered, you will be given the choice of three cards. Each one will have a different multiplier attached to it. Pick one and your win will be multiplied by the amount shown. This will only appear in the base game and is a random award, but at least you know when it does land the cards will be in your favour.

Wow, as you can see despite the low RTP, Free Spin City has a lot of extras in place to help those wins land in as many ways as possible. Some of the random features don’t seem to trigger very often, but when they do they are of a huge help. Your bonus spins are where the money is at and depending on which base game you were playing, can prove to be very rewarding. Especially when you consider that the wheel feature at the end of the bonus round can really bump up those winnings too. Overall a very interesting game to play and nice and light on the pocket too, we can see why this fast became a popular go to game for all slot fans.