Welcome to the jungle as the song goes, down in the depths of the rainforest you will find an explorer waiting for you. He goes by the name of Jungle Jim and he is waiting to find treasures galore, with you as his trusted assistant. Microgaming have created a fantastic game in Jungle Jim El Dorado and we think you will love it as much as we did. 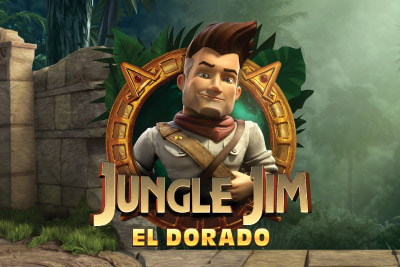 Play Jungle Jim El Dorado on any of these top casino sites;

Jungle Jim El Dorado is a 5-reel, 25 pay line slot offering a golden RTP of 97% to its adventurers. With its avalanche style symbol drop, it gives players multiple chances of winning from just one stake. All the symbols are treasure or adventurer themed with gem stones, idols and treasure chests abound. In the background you will hear lots of birds tweeting away and other jungle like noises, which can be a bit annoying after a while; but luckily you can switch them off!

Bet Amounts – Betting on Jungle Jim El Dorado begins at 25p per spin and can be increased to the maximum of £25 per spin. All bets can be amended prior to every spin by changing the coin level and coin amount. Be sure you are happy with your stake before hitting the spin button.

Wild Symbol – The Jungle Jim El Dorado logo is your wild symbol and it will substitute for all other symbols except the scatter. It doesn’t have any other value within the game however, but they do land often enough creating those important winning combinations. Which in an avalanche style game can be very helpful. 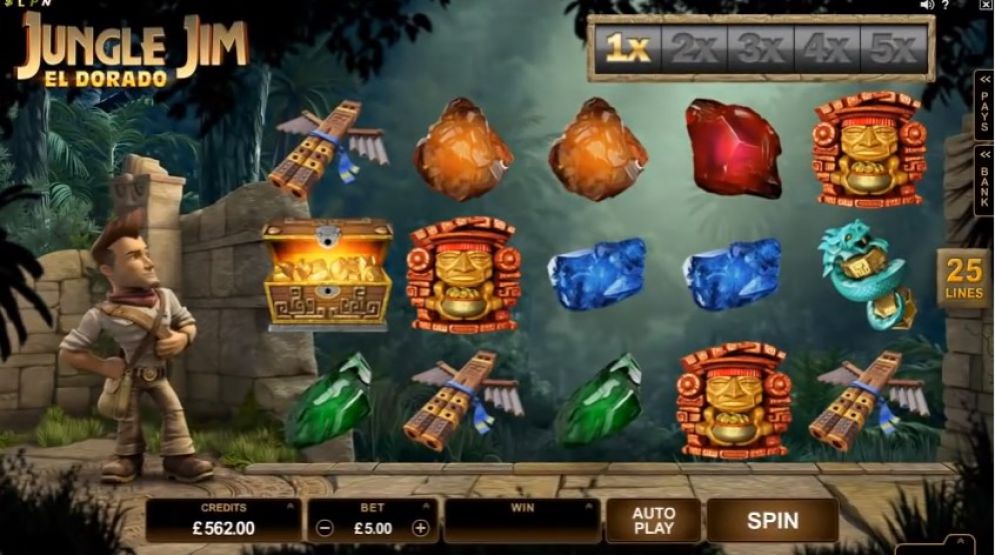 Scatter Symbol – A stone looking compass of sorts is your scatter symbol.  It will only appear on reels 1, 2 and 3 so watch out for them landing. Three or more will trigger the bonus spins feature and will also offer scatter wins on top of your line win too.

Rolling Reels Feature – Jungle Jim El Dorado has what we call an avalanche style theme, but Microgaming has given it the name of Rolling Reels. What this means is that every time you have a winning combination of symbols, they will be removed from the reels and new ones will be dropped onto the reels. Each time you make a consecutive winning combination, your multiplier at the top of the screen will increase by one step. Starting at x1 and increasing to x5 which is the maximum, but it will reset back to x1 after there are no more wins made. If you land at x5 and continue to have winning combinations fall into place, they will be paid at the x5 multiplier until the wins end and it resets.

Bonus Spins Feature – Land yourself three of the scatter symbols and you will be activating the bonus spins round. Here you will be allocated 10 bonus spins and they can be retriggered during the feature too, with no upper limit on the amount of times it can happen. During the bonus feature the multiplier at the top of the screen will increase to x3, x6, x9, x12 and x15, meaning bigger wins as the symbols are replaced.

Jungle Jim El Dorado is a fun game to play and to experience. Jim stands at the side of the reels, strutting and posing as the reels spin. We would have loved to see a feature added where Jim does something to the reels. But maybe this will happen in the future, if there is ever a second game made. We love the addition of the rolling reels as it really ramps up the excitement overall. Wins came often enough due to the rolling reels although it was slightly harder to trigger the bonus game. But, once it was activated we made some pretty big wins.