Do you have a love of exotic cats, panthers, tigers and the like? If so then this next slot is going to be right up your street, well, jungle! Microgaming have ventured deep into the jungle to bring you this next offering. Exotic Cats includes some of the wildest animals found in the jungle and combines it with the treasures that they undoubtedly guard. Step carefully now, because you wouldn’t want a Lion to gobble you up before you get chance to spend your winnings, would you? 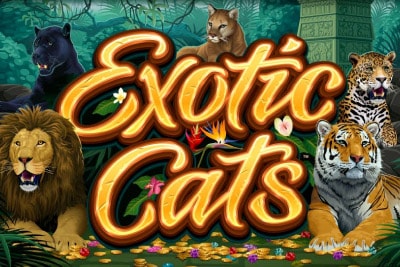 Play Exotic Cats on any of these top casino sites;

Exotic Cats is a 5-reel, 243 ways to win slot offering players an RTP of 96.33%, which is definitely something to roar about. Set against a jungle backdrop with jungle drums sounding off every time the reels spin, it gives a truly immersive feel to the game.

Your reels are carved out in wood and are filled with symbols such as wild animals, tribes’ people and the usual card symbols etched out like gemstones. Higher value symbols are the Lion, Tiger, Panther, Leopard, Cougar, a tribeswoman and a paw print. Lower values are depicted by the card suits drawn to look like precious gems and as you would expect you have your heart, diamond, club and spade.

Bet Amounts – Betting on Exotic Cats begins at just 15p per spin and can be increased up to £30 per spin. Considering the amount of ways to win, the bet structure is quite well thought out and is going to be a huge draw to players all over. Amend your bet by simply clicking the plus and minus symbols on either side of the bet amount, then hit spin and it’s as simple as that.

Wild Symbol – Your wild symbol is the Exotic Cats game logo and it will substitute for all other symbols except the scatter. It is also the highest paying symbol in the game, offering up x15 your bet amount as a win for landing x5 wild symbols. There is also something called Wild Reels active here and this includes all your cat symbols, but we will explain this further below.

Scatter Symbol – A gold square with the word scatter on the front is your scatter symbol. Landing three or more of these anywhere on the reels will trigger the bonus spins for you. Scatter wins are in play here but only for landing 4 or 5 scatters. 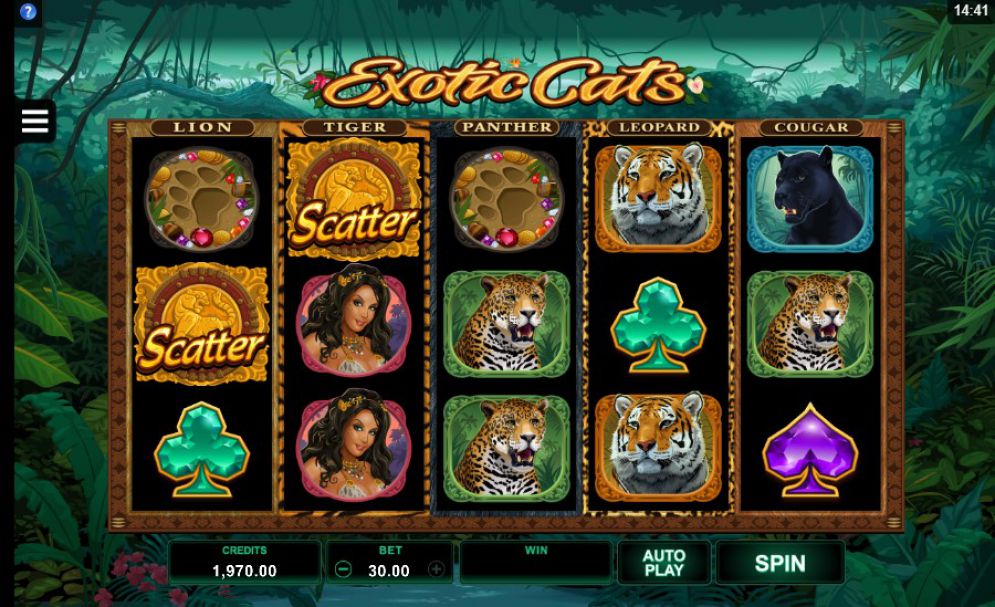 Wild Reels Feature – At the top of every reel you will see the name of one of the cat symbols present in the game. If you land the matching symbol to the name above the reels it will become an expanding wild reel.

The joy of the wild reel feature is that you can trigger multiple reels at once, meaning much bigger potential wins for the player.

Bonus Spins Feature – Having landed three or more of the gold scatter symbols anywhere on the reels, you will trigger the bonus spins feature. You will be allocated with 10 spins to play through and every time you land three more scatters, you will be awarded 5 more spins! The wild reel feature is also in play here too, which makes up a little for the lack of any extras within the round.

If you didn’t have a love for wild cats before you will now, because Exotic Cats is a fun game to play. The wild reels feature triggers so often, that you almost forget about wanting those bonus spins to trigger. However, once you do get into the bonus spins, be prepared for some fast-paced wins and not forgetting of course, you can land extra spins too. Microgaming have done it once again and given us a little bit of jungle living right in the palm of our hands.