Watch your step as we enter the jurisdiction of the one and only Judge Dredd! That’s right comic fans, NextGen Gaming have taken all the things we love about Judge Dredd and developed a slot around him. Let’s head along to Mega City One for some serious slot playing, shall we? 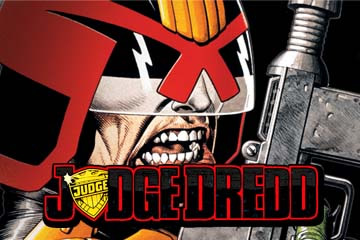 Play Judge Dredd on any of these top casino sites;

Judge Dredd is a 5-reel, 25 fixed pay line slot offering a variable RTP of between 95.22% and 95.6% to players. It offers this variable RTP due to the SuperBet options that are in play throughout the game, which we will explain further below. Mega City One is in the background behind the reels, and the positions on the reels are designed to look like dice. It has a great sound track as it plays, which makes you feel as if it is just an extension of the movie.

Bet Amounts – Betting begins at 25p per spin and can be increased up to a whopping £625 per spin! To adjust your bet, use the coin icon at the side of the spin button or click on the cog to use the slider option to change the amount. Betting can also be altered by using the SuperBet feature, which we will explain in more detail below.

Super Bet Feature – NextGen Gaming use the SuperBet option in a range of their games and it gives the player the chance to add a little something extra to their game. In the case of Judge Dredd, you are adding more wilds to the reels for an additional cost to your spin.

Be sure to monitor what the cost is to activate the SuperBet options, because this will vary with each change in your bet amount. Sometimes the added extra of more wilds may seem enticing but be warned, it can begin to eat away at your balance if you choose to play too often. 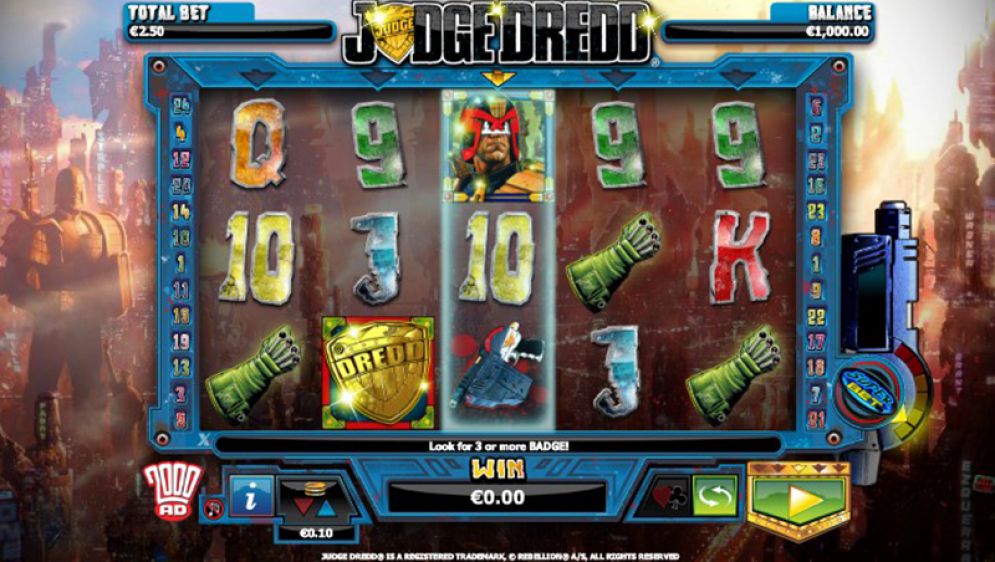 Wild Symbol – Judge Dredd himself is the wild symbol and he will substitute for all other symbols except the scatter. He is the second highest paying symbol in the game after the scatter, land x5 wilds and they award x2000 your bet amount!

Scatter Symbol – Your scatter symbol is Judge Dredd’s golden badge and landing three or more of these will trigger the feature. Scatter wins are also in play here offering an extra cash sum on top of any line win.

Judge Dredd Feature – Triggering at random, this is where you get to see a bit of the action. Judge Dredd will wander onto the reels and start shooting them up. As he does you will begin to rack up a cash sum that is added to your balance.

Bonus Spins Feature – Landing three or more of the gold police badge scatter symbol, will trigger the bonus spins round. You will be allocated with 10 bonus spins to play through and on top of that you will receive a x2 multiplier on all wins. It doesn’t end there though, because there are extra wilds added to the reels for the bonus spins round and you can retrigger the spins time and again from within the round.

For any fans of the comic book or tv/movie versions of Judge Dredd, this is going to be a great trip down memory lane. We think it possibly could have been a bit more animated than it was to entice hard core fans back again. However, that is really the only down side to Judge Dredd. We loved the features because they triggered often and the fact that Judge Dredd himself makes an appearance every so often, just finished it off nicely. Wins came fast in the main game and the features, and thanks to the extras inside the bonus spins it means bigger potential wins.