Volcanoes are normally something you would want to avoid, but not this one. Why is that you ask? Well NextGen Gaming have developed an explosive game called Volcano Eruption and it takes you right back in time. But aside from the dinosaurs and lava the game is centred around triggering the volcano feature, so let’s get started, shall we? 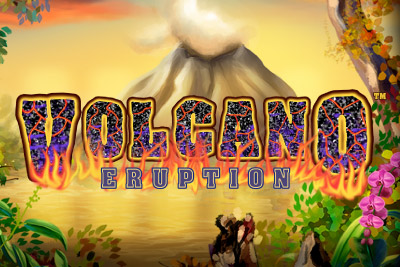 Play Volcano Eruption on any of these top casino sites;

Volcano Eruption is a 5-reel, 25 pay line slot offering a lower than usual RTP of 95.41% for players. Set against the backdrop of a volcanic landscape the reels spin transparently and alongside a very heart pounding drum style music, which certainly adds to the atmosphere. Symbols all lend from the Jurassic theme, with higher value symbols being a dinosaur, parrot, monkey, and fruit. Lower symbols being the A, K, Q, J, 10 and 9, all drawn to look like they have been carved from rock.

Bet Amounts – Betting begins at 1p per line in play and can be increased to £2 per line in play. Meaning spins in Volcano Eruption can cost anywhere from 1p per spin up to the maximum of £50 per spin.

Wild Symbol – An erupting volcano is your wild symbol and will substitute for all other symbols including the scatter. It will only appear on reels 2, 3 and 4 in the main game and also doubles as the scatter symbol too. 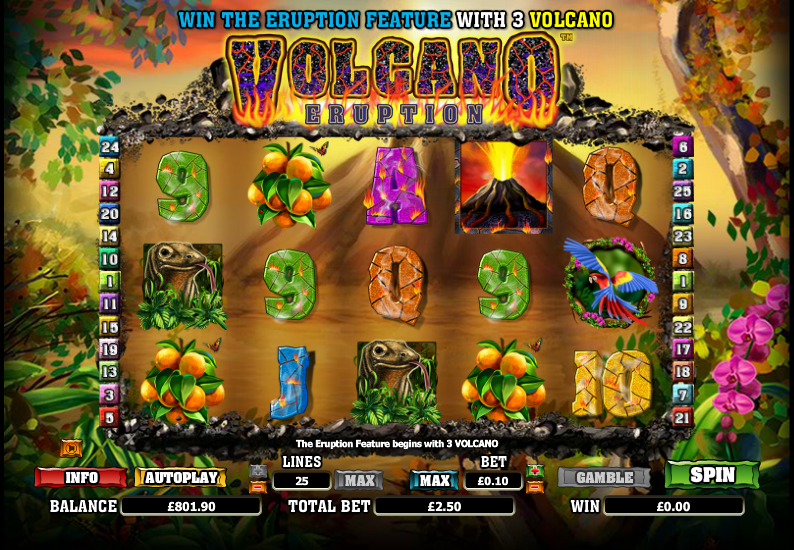 Scatter Symbol – Land yourself three of the volcano wild/scatter symbols on reels 2, 3 and 4 in order to trigger the bonus feature. Scatter wins are also in play here too for x2 or x3 scatters and will pay out on top of any line wins.

Volcano Feature – Having landed x3 or more of the volcano wild/scatter symbol on reels 2, 3 and 4 you will trigger the volcano feature. Here you will be allocated with 5 bonus spins, but you will be given a little boost to help. The centre reel will be turned into a fully stacked wild for the duration of your spins. It will also be animated and show the lava erupting from within. As it does it will randomly place wilds onto the reels on every spin. This means the centre reel is wild and you will be awarded extra wilds at random, helping to complete bigger potential wins on every single spin.

Gamble Feature – After every winning spin on Volcano Eruption you will be given the option to gamble, in an attempt to win a bigger amount. You can try to double or quadruple your win by hitting the gamble button and deciding on the suit or colour of the hidden playing card. If you choose the correct colour you will double your win, the correct suit will quadruple it. Each winning gamble allows you to guess again up to a maximum of five correct guesses. At which point you will be returned to the game with all your winnings, however, choose incorrectly and you will lose everything.

Overall Volcano Eruption is a great game to play, with a simple interface and a base feature that gives you a little extra. The feature however is a little harder to trigger than you would hope and can take some time to land. When it does though there are some relatively good-sized wins to be had, due to the middle reel being wild. Our only negative is that with there only being 5 spins, it would have been good to have the option to retrigger the bonus spins. This is the only downside to the whole game and whilst it can be a driving force for most players, we still found ourselves enjoying all the Volcano Eruption had to offer.