The name of this slot doesn’t really conjure up a true reflection of what it is actually about! Which is great word play from Big Time Gaming, because the title is catchy and creates intrigue. When you load up the game and begin playing you get a nice surprise in the split screen design, with a medieval knight taking a walk along the bottom. Intrigued, we were, read on to find out more about the Holy Diver slot game. 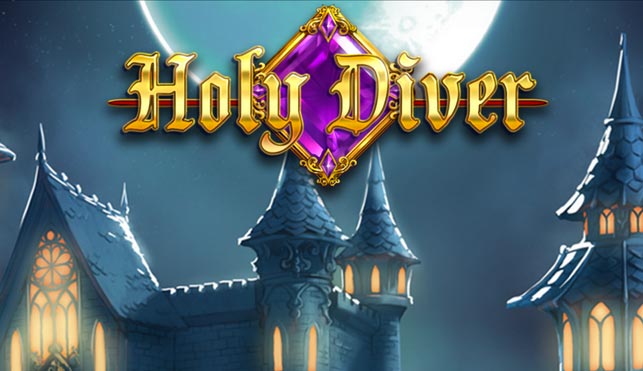 Play Holy Diver on any of these top casino sites;

Holy Diver is a 6-reel slot offering the megaways win feature and a variable RTP of 96.39% to 96.54% for players. Megaways win means there is up to 586,971 potential pay lines that can be in play at any one time. This is in part due to the fact that some of the symbols are different in size to others. So, the more smaller symbols there are on the reels, the more ways there are to win. As for the reels themselves this is a quirky split, for your reels are set above a smaller screen on which a knight takes a walk on every spin. Along the way he will come across a chest that he will kick to reveal what is within.

Bet Amounts – Betting on Holy Diver begins at just 10p per spin and can be increased up to the maximum of £20 per spin. It is simple to switch your stake amount, because there are green arrows on either side of the amount being bet. Click these arrows until you are satisfied with the bet amount and then get spinning.

Wild Symbol – There is no standard wild symbol in Holy Diver, but as you will read further down in the features there is still a wild in play. When it does land it will be the word wild against an ornate and colourful background. The wild symbols will only appear on reels 2, 3, 4 and 5 when they are triggered by the feature.

Scatter Symbols – There is no scatter symbol either in Holy Diver. Instead the main feature which revolves around the walking knight at the bottom of the screen, will trigger the extras in the game.

Other Symbols – Symbols in Holy Diver range from gem stones to card symbols, each of them edged in gold to give it that royal look. Higher value symbols include an amethyst, ruby, sapphire and emerald gem stones. Lower values include the A, K, Q, J, 10 and 9 card suits, brightly coloured to stand out amidst the mass of symbols on the reels. 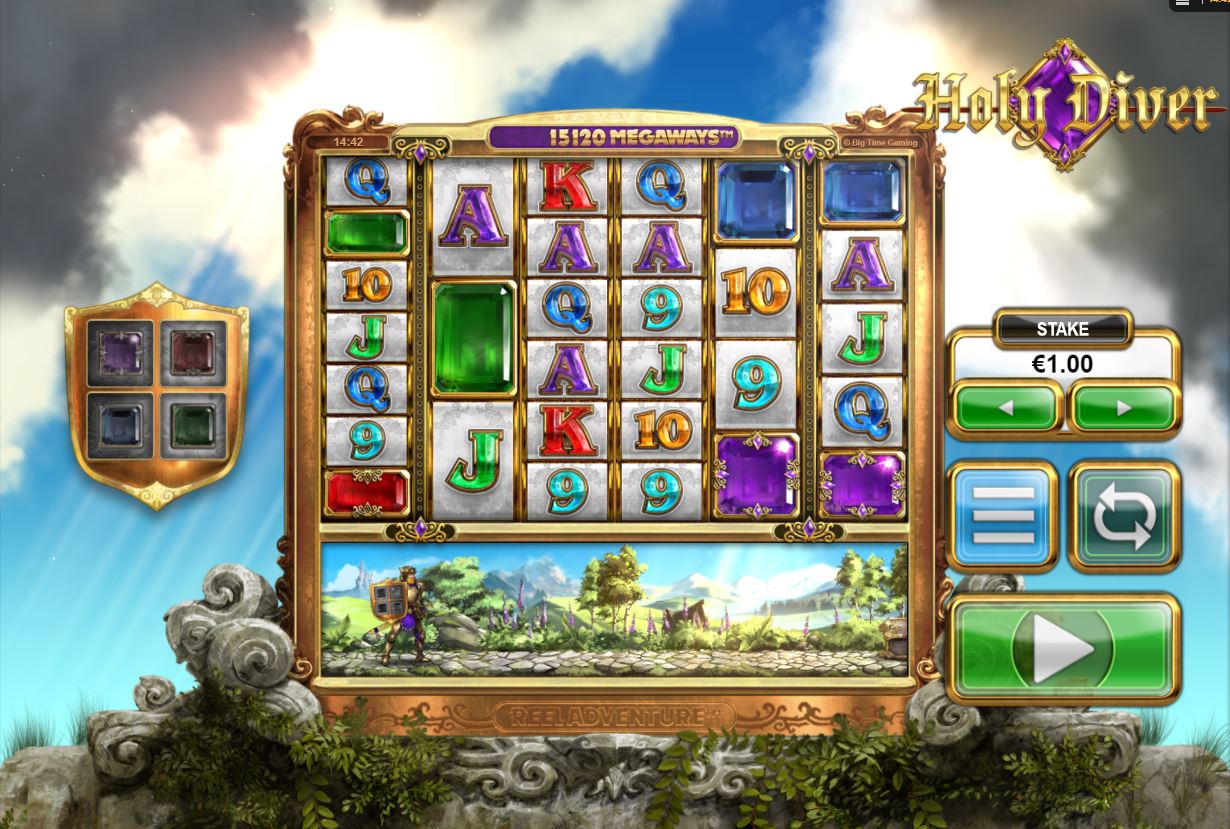 Chest of Fortune Feature – This is where all the excitement happens, because there is a knight that takes a leisurely stroll below the reels on every spin. Every so often he will come across a chest on the road and will kick it to reveal one of the following mini features. These features will only activate on reels 2, 3, 4 and 5, so be aware of this as you play through.

Shield of Fortune Feature – To trigger the shield of fortune feature on Holy Diver, you will need to uncover all four of the gemstones on the shield to the left of the reels. You will now be given two choices, the first being to level up your game and the second is a bonus spins round. However, there are only three levels available in the game, so once you have reached level 3, the bonus spins will automatically be awarded.

Holy Diver is unlike most slots and offers players a distraction from what could be quite a boring game. The fact that the wilds are triggered from the knight feature below the reels, is certainly a different tact and it works well. However, because the wilds resulting from that feature only land in reels 2, 3, 4 and 5, this can sometimes result in small or no wins at all and in turn can be quite frustrating as the game goes on. Main game wins do occur often but in most cases are much smaller than you would be hoping for. Not just that, but the bonus spins and level up options are incredibly hard to trigger, unless you have the patience of a saint and the balance to sustain long term playing.

In order to trigger the bonus spins you need to fill the shield on the left with a gem of each colour and this takes a while to complete. Overall if you don’t mind losing out on the bonus spins, Holy Diver is a great and fun game to play with lots of small wins coming through. But for those of you that prefer the bonus spins rounds, then we would advise you to bet small and take your time, or to avoid the game altogether as it takes too long to trigger.