When you come across a slot called Cash O Matic it’s too intriguing not to check it out. Hailing from the NetEnt libraries and combining some of their best tricks, like the reverse avalanche reels, crazy scatters and insane win multipliers. All of which are packaged up in a neat old-fashioned style slot screen. 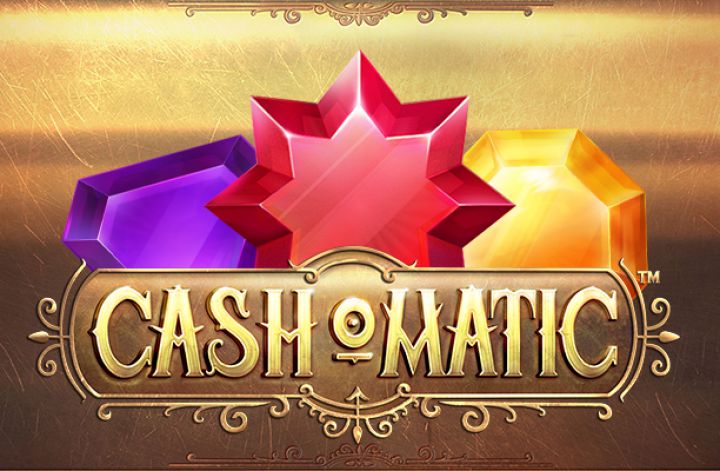 Play Cash O Matic on any of these top casino sites:

Cash O Matic is a 5-reel slot offering players 1024 ways to win and an RTP of 96.33%. You will soon discover that the slot itself is designed to look like a vintage slot machine, fashioned out of rivets and metal. Symbols however don’t run with the overall theme and are instead a mix of shapes and card symbols in bright bold colours. Higher paying symbols are the red, orange, green, blue and purple gemstone shapes. Lower paying symbols are the A, K, Q, J and 10 each one brightly coloured too in matching colours to the higher paying gems. Even the music playing along sounds like it could be right at home in an olden day honky tonk, never mind a modern slot game. Which just adds a little something extra to the overall feel of the game.

Bet Amounts – Betting on Cash O Matic begins at 20p per spin and can be increased up to £100 per spin. You will find the bet level and coin value on either side of the spin button. Use the plus and minus symbols to adjust each one until your desired bet is reached.

Wild Symbol – There is no wild symbol in Cash O Matic which may be off-putting for some out there. However, after playing through the game we found it doesn’t have a negative impact. That in part is due to the exciting extra features that you will read about below.

Scatter Symbol – Your scatter symbol in Cash O Matic is one of four coloured gems inside a metallic square. The colours have no bearing on the game and appear to be just for show, they are orange, blue, green and silver. The gem scatter can land anywhere on the reels and in this game, you need at least 10 scatters to trigger the bonus spins. This may seem rather steep but thanks to the avalanche feature which will be explained below, it is easier to reach than you would think!

Reverse Avalanche Feature – Why go for a standard avalanche feature when you can reverse it? Normally an avalanche feature will remove the winning symbols from the reels and drop new ones into their place. With the reverse avalanche the winning symbols remain on the reels and all the other symbols are removed letting new ones fall into their place instead. The joy of this is that the initial win combination is still on the reels, so should any matching symbols fall into place it will create a bigger win and trigger another avalanche. Now, the reverse avalanche actually helps trigger two of the main features, the win multiplier and the scatter gem bonus spins.

Win Multiplier Feature – At the side of the reels you will see a chart with a number of win multipliers on it. When the avalanche feature is in play and your winning combinations fall to the bottom of the reels, this is where the multipliers are triggered. If those winning symbols fall and fill the whole row, you will earn an extra multiplier for the win. 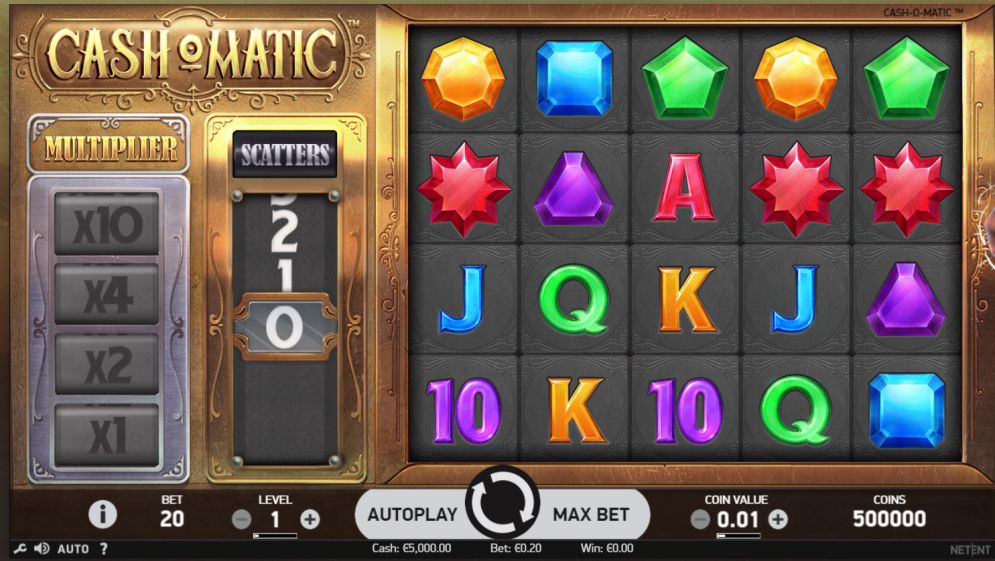 Bonus Spins Feature – To trigger the bonus spins on Cash O Matic you need to have landed at least 10 or more scatter symbols. They don’t need to land all at the same time, but they do have to be in succession. Here is how it works, thanks to the avalanche feature you could land say x3 scatters on the reels as well as a winning combination. The winning combination will remain whilst all other symbols are removed to be replaced by new ones. When the scatters landed you will have activated the scatter symbol tally which is off to the left of the reels and it will move up 1 level for every scatter that landed. The new symbols will now drop into place and any scatters you land on this round will now be tallied up before they are removed as part of the avalanche. If this continues and you manage to tally a minimum of x10 scatters in succession, then you will now trigger the bonus spins feature.

You will be awarded a number of spins and your win multipliers is activated during the round. It is also increased depending on the number of scatters in place when the feature triggered.

10 bonus spins are awarded, with an additional spin added on for each additional scatter that was tallied up before the round triggered. Your win multipliers are now increased as shown below:

The bonus spins feature cannot be retriggered from within the round. However, for each full row you complete thanks to the avalanche you will be awarded x1 extra spin on your total.

Cash O Matic does seem a bit overwhelming to understand at the offset. But once you begin to play the rules seem to fall into place and it becomes clearer as to how it all works. You will find you get plenty of main game wins across the pay out scale. But that bonus game is a little harder to trigger and can take time. It does come, thanks in part to the amazing reverse avalanche feature, but you need to have quite a few avalanches or scatters on x3 or more reels at once to trigger it quicker. When you enter that bonus spins round though, this is where the big money is found so it is worth the wait. Overall Cash O Matic is an extremely playable game and one we will be revisiting in the future.