This next slot has quite an epic feel to it, starting with its lengthy title. Hall of the Mountain King makes you feel like you are about to step into a movie, never mind a slot. Thanks to the development team at Quickspin, you can enter the realm of the trolls and see if you can steal away some of the vast wealth they have amassed. 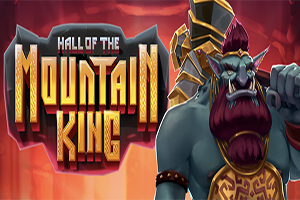 Play Hall of the Mountain King on any of these top casino sites;

Hall of the Mountain King is a 5-reel, 20 fixed pay line slot that offers an RTP of 96.29% for players. Set on the top of a mountain with the valleys below and blue skies above, the reels look as if carved from a crumbling stone wall. The game is packed full of interesting symbols and characters that are designed beautifully. There are plenty of sounds within the game include birdsongs, hammering noises and you may even recognise a certain classic tune (that the game is named after) playing as the reels spin!

Wild Symbol – A gold W is your wild symbol and it can land anywhere on the reels. It will substitute for all other symbols except the bonus.

Other Symbols – Higher paying symbols in Hall of the Mountain King include the five troll characters. Each one has a different coloured background which matches in some way to the character it houses. Lower paying symbols are the A, K, Q, J and 10 found in playing cards, designed to look like wooden carvings.

Wild Multiplier Feature – Every time a wild symbol drops onto the reels it triggers the wild multiplier! For each wild symbol you land you step up one level on the multiplier, beginning at x1 the win and ending at x5 the win. This is increased during the bonus feature from x11 to x15 the win giving you much bigger wins. 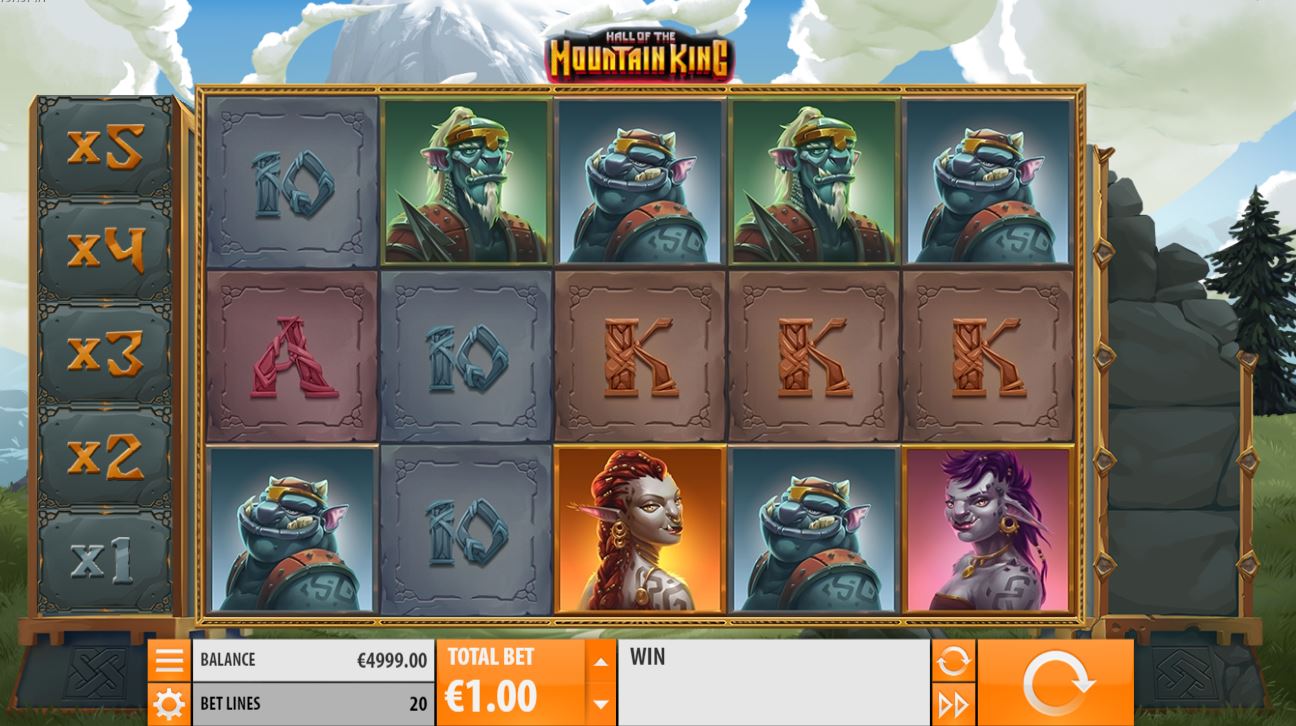 Bonus Spins Feature – Quickspin like to change things up and as such have created a three stage bonus spins feature for Hall of the Mountain King. But first you need to trigger it by landing three or more of the hammer bonus symbol on reels 2, 3 and 4. When you have done this you will begin stage 1 of the bonus round, once stage 1 is complete you move to stage 2 and then to stage 3.

Spins are not awarded in bulk here, rather you will continue to spin the reels until you complete each stage requirement. However, in stage three you do only get x3 spins in that final stage. You may be wondering how you break the required blocks to move through the stages. As the reels spin a reel position will be chosen at random as the bonus block. When the symbols land on the reels this bonus block becomes the one that is smashed at the side of the reels. Once you have completed the required number of blocks you progress to the next level.

The explanation of each stage is below:

Hall of the Mountain King has a lot to offer players, from a great RTP to a three-stage feature that really pulls you into the game. There are lots of wins to be had in the main game thanks to the wild multiplier, which is always great to see. But what is even better for players is that the bonus game triggers quickly too. Thanks in part to that bonus hammer symbol landing more frequently than you would think. With insanely good graphics and an epic tune playing, it’s easy to see how people get lost in this game.