Who would have thought that pigs could become pirates? Well in the wacky world of Red Tiger Gaming they did and what fun it is to watch. Enter the world of the Piggy Pirates and pray their ship does not come within ten feet of yours. If it does then you may be in for a surprise, and in the case of these sea going piggies it may not be the one you are expecting! 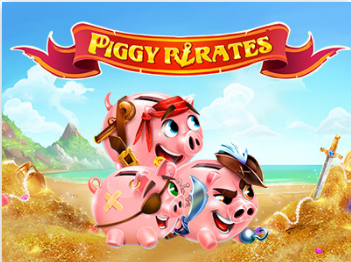 Play Piggy Pirates on any of these top casino sites;

Piggy Pirates is a 6-reel, 40 fixed pay line slot that offers an impressive 96.11% RTP for all you salty sea dogs, pigs we mean sea pigs! When you first enter the game, you will see the Piggy Pirates ship coming up alongside the Big Bad Wolf’s ship and your reels are in-between the two. There’s a lovely backing sound track playing along, which is the sound of the waves crashing and the birds in the sky. Almost relaxing until those reels start spinning that is, more so when the bonus pigs land on the reels and things start to hot up!

As you would imagine the symbols on Piggy Pirates are buccaneer images, with high value symbols being a map and treasure chest. Low value symbols are your card suits, so would include the ace, spade, heart and diamond.

Bet Amounts – Betting begins at 20p per spin and can be increased up to £50 per spin. Making Piggy Pirates one of the few games that are easy on the pocket, as well as on the eyes and ears! Adjust those bets by hitting the total stake button at the bottom left of the screen. We always advise you double check the stake before hitting spin, because once you do there’s no turning back.

Wild Symbol – There are no wild symbols within the base game of Piggy Pirates, which is going to be a bit of a let-down for some. But there are wilds in the bonus game in the form of a golden coin, so watch out for those. 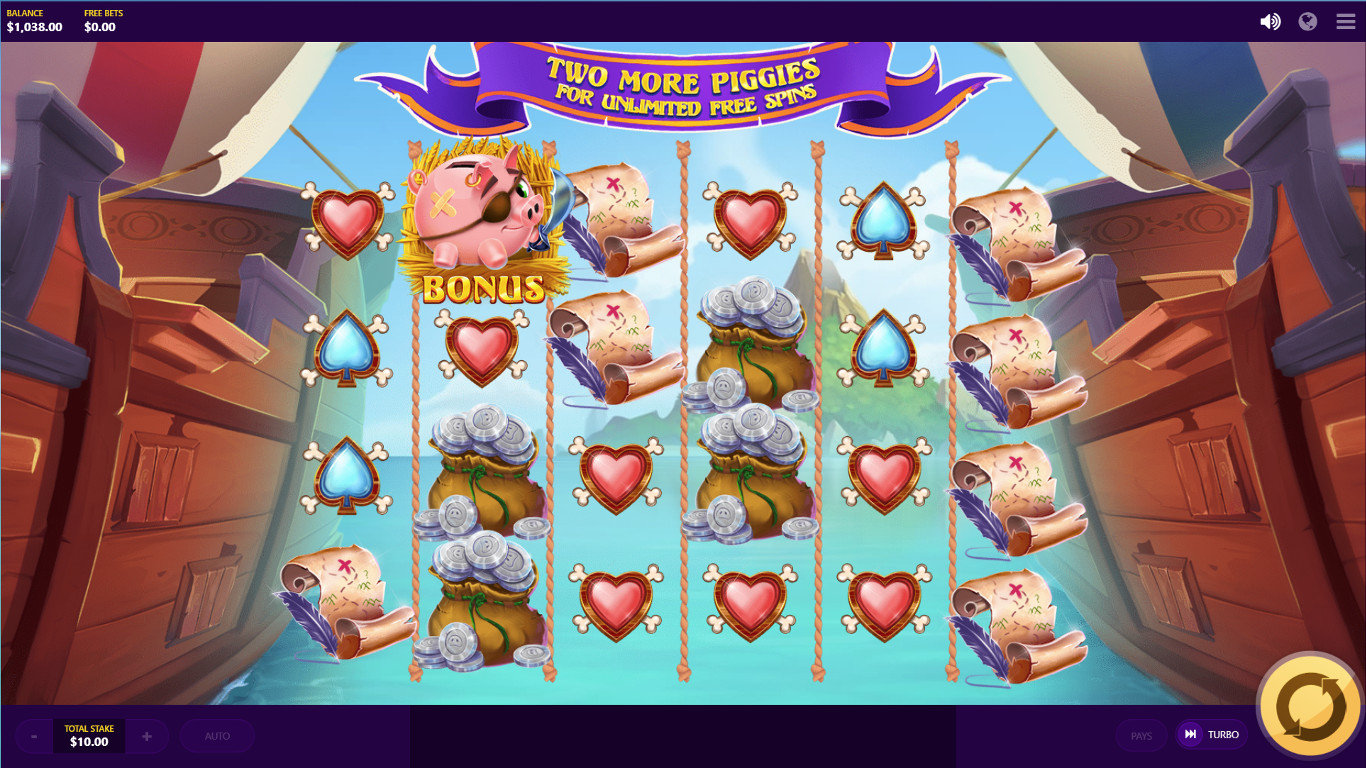 Scatter Symbol – It only makes sense in a game called Piggy Pirates that the scatter symbol be in the form of a pig. Not just one pig, oh no, there are three little pirate pigs to look out for here. Each one is dressed in their own pirate style get up and in order to trigger the bonus you need to land three on the reels at once. Lucky for you there is a little twist with the scatters which we will explain below.

Progressive Jackpot – Piggy Pirates has a progressive jackpot for players to win. It’s easy enough when you know how, and we are going to tell you. So, if you see three symbols with cannons, a ship and a scroll with the word jackpot landing, then you are in for a great day. Land yourself three of the jackpot symbols which will award one of the two main prize pots available. You will see the mini jackpot and the mega jackpot on each side of the reels when in play, as well as this there is a daily jackpot to be won. Watch the timer ticking down, as it will be awarded before that timer runs out to one lucky player who lands three jackpot symbols.

Bonus Spins Feature – As we mentioned earlier there is a little twist with the scatter symbols. Each time a Piggy Pirate lands on the reels it will become a wandering symbol. This means it will move across one reel on each subsequent spin after it lands. Some of the piggy scatters will even stay in place for numerous spins until resuming its travel across the reels. To activate the bonus, you need to land three piggy scatters on the reels. With the addition of the wandering pigs and the snoozing pigs this gives you a much bigger chance of landing three at once. After the piggy scatter reaches the opposite end of the reels it will fall off, literally and land in the sea.

Once you have triggered the bonus you are allocated an unlimited number of spins, but once the Big Bad Wolf appears the spins are over. As the reels spin wild gold coins are collected by the pigs, simply collect x6 of these to bag a x2000 coin win. When the wolf appears on the reels, he will throw a bomb which will make all the wilds collected reappear on the reels for one last spin.

What’s not to love about Piggy Pirates, aside from the lack of a base game wild that is? Red Tiger Gaming have created an epic slot once again for you. Full of fun, interesting animations and graphics, and who doesn’t love the idea of unlimited bonus spins? That’s where the good stuff ends though, because triggering those bonus spins is actually harder than it seems. More often than not you will end up with a maximum of two pig symbols on the reels at once. It did eventually happen for us but not for the want of trying for a long time. So, although the game is low cost stake wise, be prepared to play for the long haul if you want that bonus to land. Overall, we did have great fun with Piggy Pirates and would definitely play again, as the base game wins more than made up for the lack of the bonus triggering. But if you are in to the games for the bonus, then you may want to avoid Piggy Pirates as its definitely going to take you a while to get there.