Microgaming have taken the oriental theme and rather than stick with one focus, they have encompassed areas from all over the far east. This is an unusual step for a slot designer, as many tend to stick to one theme. But Microgaming are known for their originality, so let’s explore the Jewels of the Orient and enjoy a pretty nifty feature whilst you are there. 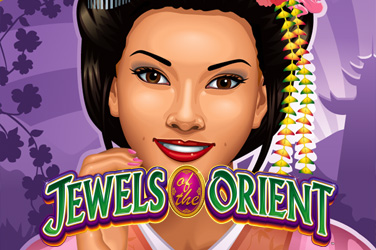 Play Jewels of the Orient on any of these top casino sites;

Jewels of the Orient is a 5-reel, 9 pay line slot that offers players an RTP of 96.10%. In the background you will see a beautiful sunset throwing shadows over the horizon of a village, with temples galore in view. The reels themselves are set inside an ornate red and gold frame, and all the symbols have something in keeping with the theme.

As the reels spin there is a distinctly oriental tune playing along, which is unfortunately disrupted by the slot machine noises. Higher value symbols are the 5 female characters, each one in different attire relating to an area of the far east. Starting with China (red), Thailand (orange), Korea (green), India (blue) and then Japan (pink). There are just 2 lower value symbols in the game, and these are a treasure chest and a jade pot full of gold.

Bet Amounts – Betting on Jewels of the Orient begins at 1p per line in play and can be increased up to the maximum of £10 per line in play. This makes spins cost anywhere from 1p per spin up to the maximum of £90 per spin. You can play around with the number of lines you have in play, the amount you want to bet per line and the value of the coins, in order to find your desired bet. These options are all found on the main bar to the left of the spin button.

Wild Symbol – Your wild symbol is the Jewels of the Orient logo and it will substitute for all other symbols except the scatter. It is also the highest paying symbol of the game and offers players a whopping x2500 your bet amount as a win for landing 5 on an active pay line.

Scatter Symbol – A temple is your scatter symbol in Jewels of the Orient. To trigger the feature, you will need to land 3 or more of the scatter symbol anywhere on the reels. This is a great bonus for players, because it means that you can trigger the bonus feature whether you have 1 pay line in play or all 9. Giving every player a fair chance of triggering the bonus feature, which is something we love about this game. 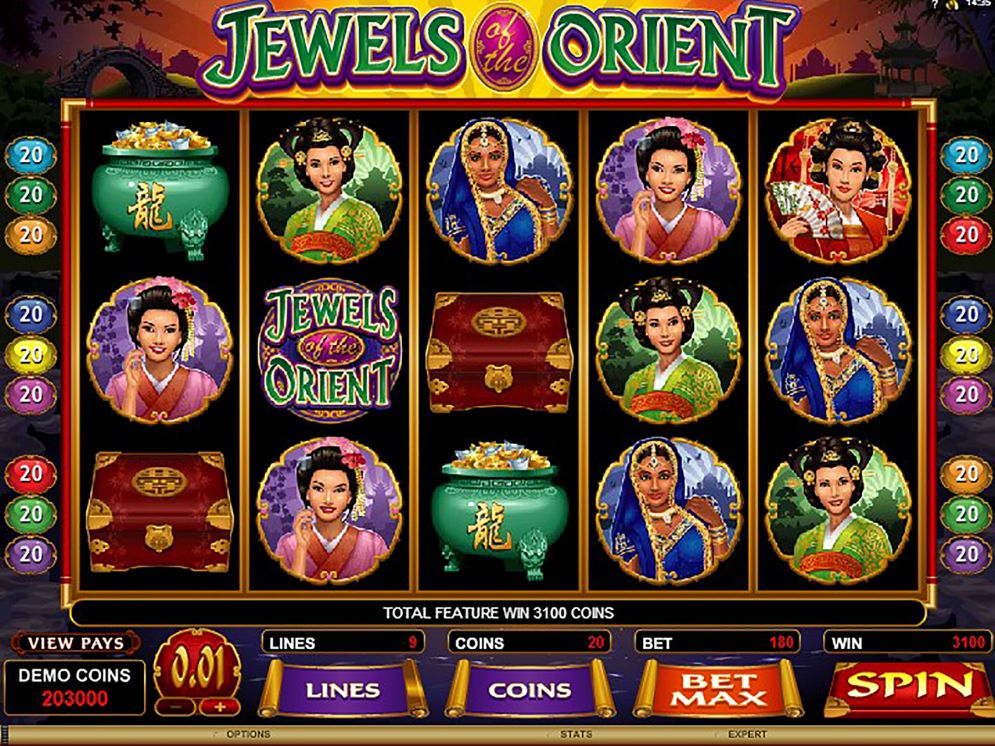 Temple Bonus Feature – Once you have landed three or more temple scatter symbols, you will trigger the epic bonus feature. The number of scatters you land will determine which parts of the feature you are offered; it begins with some gentlemen lined up holding boxes.

You will get to choose from the boxes on offer to select each part of your feature. The first box you pick will offer you your allocation of spins, the second pick will give you your multiplier and the third will give you an instant win amount as well!

Your choices of spins, multipliers and coin wins are as follows:

The bonus feature cannot be retriggered from within the round, but as you can trigger it easily from the main game this is not so much of an issue.

Jewels of the Orient is certainly a hidden gem in the Microgaming library. We found it to be enjoyable and will happily play again. Wins happen fairly often in the base game, but the bigger money is of course in the bonus feature. Considering this, you would expect to find it hard to trigger the bonus feature. But it is quite the opposite with Jewels of the Orient and in most cases provides much bigger potential wins. This is due in part to the fact that the scatters will land anywhere on the reels and don’t need to be on a pay line. Meaning you are in with as fair a chance as anyone else playing the game to get that bonus feature triggered. We hope you enjoy Jewels of the Orient as much as we did.