Yggdrasil Gaming are well known for their awesome Vikings themed games, but did you know they had lots of other slots? Now you do, and we are sure you will love this next offering as much as we do. Welcome to the tombs of the ancient Egyptians, and the realm of Tut’s Twister! Now, we aren’t too sure how twisters and Tutankhamun came to merge together, but we think it works so check it out for yourself. 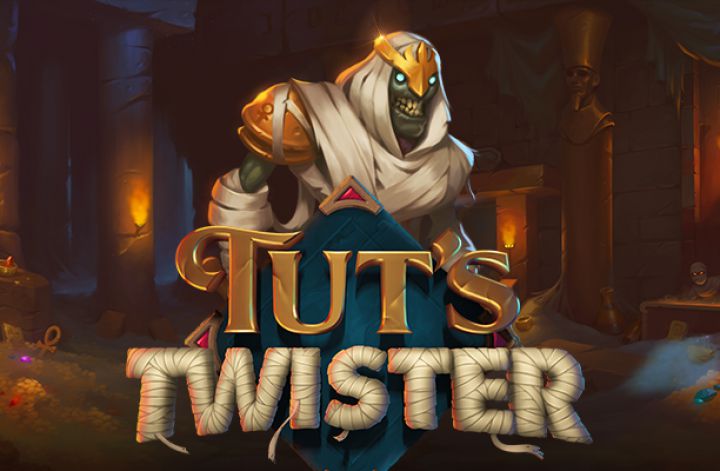 Play Tut’s Twister on any of these top casino sites;

Tut’s Twister is a 5-reel, 25 fixed pay line slot that offers players a treasure of an RTP at 97.10%. It is set against a tomb backdrop filled with treasures and of course a mummified Tut who stands guard at the side of the reels. Lots of Egyptian symbols are in play here including a scroll, ring, jewels and the sign of Anubis, which make up your higher value symbols. Your lower value symbols are depicted with the spade, heart, club and diamond all gilt edged and looking fit for Cleopatras crown.

Bet Amounts – Betting on Tut’s Twister begins at 10p per spin and can be increased to the maximum bet of £125 per spin. To adjust your desired bet just click the plus or minus symbols to the left of the spin button, until you reach the stake you wish.

Wild Symbol – Tut himself is the wild symbol and he will substitute for all other symbols within the game. He also plays a special role in one of the features, and in the absence of scatter symbols this is really important, read about it below.

Wild Mystery Feature – Throughout the entire game if a single wild lands anywhere on the reels, it will award one of four possible outcomes:

Hieroglyph Twister Feature – Above the reels there are hieroglyphs in sets of 3 to 5. Each reel has its own set of symbols and the aim is to fill each set-in order to activate the Tut’s Twister feature for that reel only. The reel that has triggered the feature, will also award an extra wild on the reels for every hieroglyph that has been collected.

Tut’s Twister Feature – With Tut’s Twister there are two ways to trigger it within the main game. The first was mentioned above, with the collection of the hieroglyphs on individual reels. The second is to land two or more wilds on the reels at the same time. When triggered with multiple wilds, the wild symbol on the furthest left reel becomes the twister and expands to fill the whole reel.

As it twists away it will suck the other wilds across the reels on each subsequent spin. The feature ends once all wilds have been sucked inside the twister and off the reels. If more wilds land during the feature it will extend it until there are no more wilds to be pulled into the twister.

You will see a number appear above the twister which is a multiplier, and this will increase x1 every time 3 wilds have landed. Once all the wilds have been sucked off the reels, you will be offered one last chance respin to try to land more wild symbols. If none appear, the wilds that were sucked into the twister will be scattered onto the reels and one last win will be awarded.

Wow, when we saw the Yggdrasil logo, we knew we wouldn’t be disappointed, and we were not. Tut’s Twister is a different variation on the Egyptian tomb theme, but it was enjoyable none the less. Despite the lack of a scatter symbol, the bonus spins gained from Tut’s Twister made up for that and they triggered more often than you would think. There is a lot to take in with this game but once you have played it through it all becomes a bit clearer. We really enjoyed the Tut animated figure at the side of the reels too, it added a little something extra to the game and that’s what we love about this slot designer.