It’s time to step on the magic carpet and head to the Arabian desert, because Boku Slots is in search of something exciting. We’re sure we’ve found it with the Sand Princess, which was created by 2by2 Gaming and is an enticing game full of twists and turns. 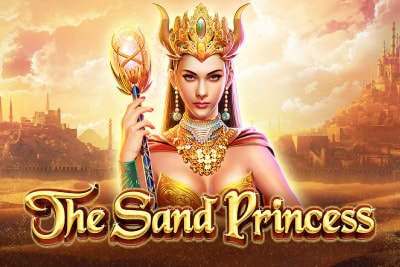 Play the Sand Princess on any of these top casino sites;

The Sand Princess is a 5-reel, 30 fixed pay line slot, which offers an RTP of 96.05% for players willing to brave the sandstorms. Set against the backdrop of a huge kingdom nestled in the sand dunes and with symbols that look like they have been taken straight from the story of Ali Baba, The Sand Princess just oozes with the promise of treasures abound.

Bet Amounts – Betting begins at 30p per spin in the Sand Princess and can be increased to a maximum of £30 per spin if you wish.

Wild Symbol – The sand princess herself is your wild symbol and she will substitute for all other symbols except the scatter. She is also one of the two highest paying symbols alongside the sultan. They both offer 500x coins for landing 5 symbols on a winning pay line. You may notice at some point that she appears stacked on reel 3 only, so look out for this as it begins one of the features.

Scatter Symbol – A golden sand timer is your scatter symbol, it can only appear on reels 2, 3 and 4.  To trigger the bonus spins you need to land three of the timer scatter symbols anywhere on those reels. Scatter wins also apply with this symbol, on top of any line wins for landing 3 or more on the reels.

Sand Princess Feature – Once you land a fully stacked Sand Princess on reel 3 you will trigger the mini feature, of which there will be one of four options awarded.

Bonus Spins Feature – Having triggered the bonus spins round by landing three or more scatter symbols, you will be awarded one of the following features:

Whilst the Sand Princess has an interesting theme, it is a bit lacking in excitement for us. Although once those features kick in it does change pace a little. The game itself is slow running and the music in the background actually made us a little sleepy, so we had to switch that off. Its saving grace is the two features, with their multiple choices makes it exciting waiting to see which will land. Wins did come though they were slow in doing so, once again the bonus features is where the money is to be made. But if you are wanting a quick play then this may not be the game for you.