Old school slots either sink or swim and with all the modern age tech that you have these days, sometimes it’s good to go back to basics. Is that the case for Win Escalator from Red Tiger Gaming? Well it has some modern twists with an 80’s feel design, so the only way to find out is to keep reading. They have even managed to squeeze two brilliant features into the game, which we think you are going to enjoy. 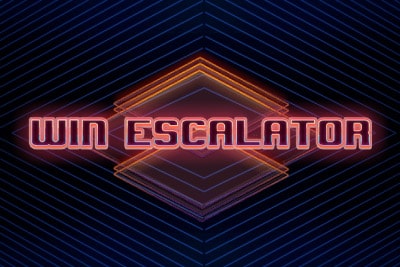 Play Win Escalator on any of these top casino sites;

Win Escalator is a 4-reel, 3 pay line slot which offers a very reasonable 96.05% RTP. Considering the amount of pay lines in play we are anticipating great things from this game. Spinning in bright neon lights against a dark background, the higher value symbols are the flaming 7, gold bell, lucky horseshoe and the silver star. Lower value symbols are the watermelon, grapes, orange, lemon and cherries. Even the song playing in the background is reminiscent of some 80’s tv show and it works so well whilst the game is in play.

Bet Amounts – Betting begins at 20p per spin and can be raised up to £100 which is the maximum bet amount. You will see the bet amount to the lower left of the screen below the reels and that is where you need to click to change it. Once you have clicked on it a screen will expand upwards and you will have a choice of bets between the lowest and highest; pick one and hit spin, easy as that.

Wild Symbol – A huge glistening diamond is your wild symbol in Win Escalator. The diamond wild will substitute for all other symbols except the scatter. It also is the main component in triggering one of the features that the game is named after, which is the Win Escalator.

Scatter Symbol – The scatter symbol is an orange background with the word free spins emblazoned across the middle. Land three or more of the scatter symbol anywhere in view to trigger the bonus spins feature. 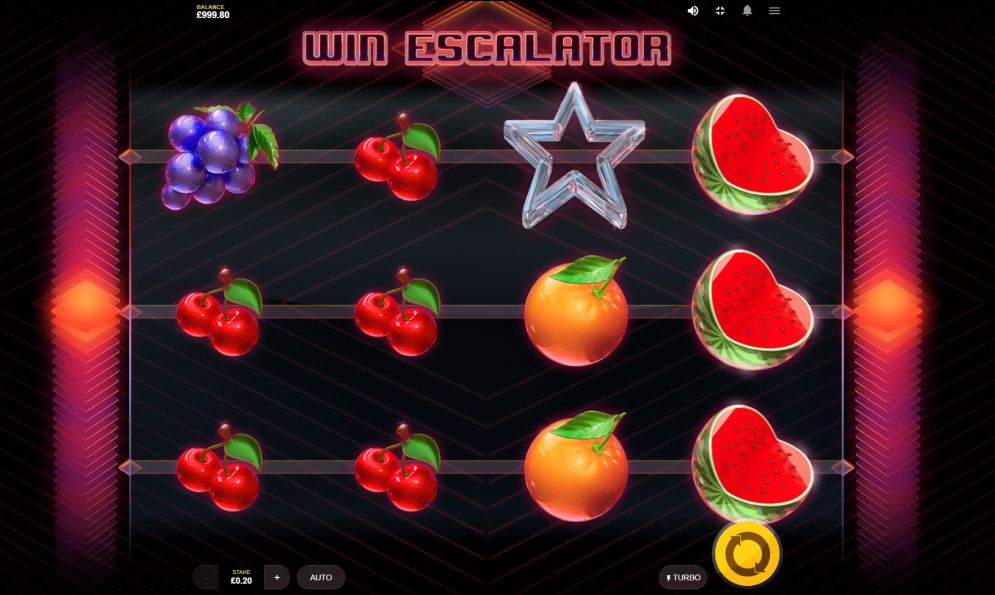 Wild Escalator Feature – We mentioned above that the diamond wild symbol also plays another role and we think you will love it. Every time the diamond wild lands on the reels it triggers the win escalator feature. The wild will lock onto the reel it has landed and move down one position with every subsequent spin until it drops off the reels. This means that every time it lands you have x3 chances of it completing wins. Not only that but you can have multiple wilds on the reels at any one time! Meaning each one will trigger the win escalator every time it lands, regardless of how many are already on the reels.

Bonus Spins Feature – Land three or more of the scatter symbol anywhere in view to trigger the bonus spins feature. On entering the round, you will be awarded with x10 bonus spins initially with the chance of gaining extra spins during the round. You are also awarded random expanding reels during the feature too. This means that at any point during the game your reel set can be expanded by at least x1 row and up to x5 rows, giving you up to x8 rows in total. Not only does this give you more symbols and chances to form wins, it expands your pay lines from x3 to x8! The bonus spins feature can’t be retriggered from within the round unfortunately. However, if you land a diamond wild on one of the expanded reels, you are awarded an extra spin for every wild in the expanded section.

With 80’s styled neon lights, sound and symbols this slot doesn’t actually scream play me from the offset! But, if you give it a try we think you are going to love it, we know we did! We loved that with every win made, the winning combinations are lit up and the neon arrows on either side of the reels flash away. This seems like something so little, but it really went a long way to adding a little excitement to the game. The win escalator feature triggered regularly which we were a little surprised about, but obviously very grateful for. Overall, Red Tiger Gaming have developed something quite spectacular in Win Escalator. Blurring that fine line between retro and modern slots well and coming up with a great game that people of all experiences will enjoy.

Legend of the Golden Monkey

February 8, 2019 Boku Slots Comments Off on Legend of the Golden Monkey