What could be more entertaining than a martial arts slot, well how about a fox doing martial arts in a slot? Bow before the Sensei of this dojo the venerable Mr Flaming Fox, which is a creation from the software developers Red Tiger Gaming. 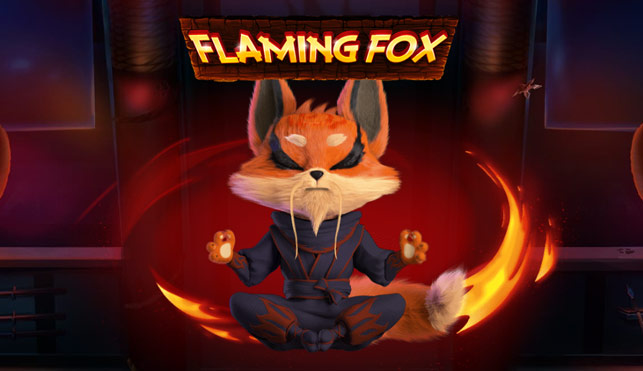 Play Flaming Fox on any of these top casino sites;

Flaming Fox is a 5-reel, 10 fixed pay line game that offers players an RTP of 95.06%. Don’t get too disappointed about the 10 pay lines, because Red Tiger have designed it so that the pay lines pay both ways!

As for the game, its set inside a martial arts training room and the sensei, Mr Fox is sitting cross legged behind the transparent reels. Symbols are made up of quirky characters and card denominations. Higher values including some crossed swords, a scroll, a headband of sorts, a pair of boots and what looks like a backpack. With lower values taking up the card symbols A, K, Q, J and 10 in oriental styled graphics. The soundtrack is pretty cool, with an oriental, karate theme to it and we have to admit we didn’t get bored of it; which is unusual for us.

Bet Amounts – Betting begins at 20p per spin and can be increased to the highest stake of £50 per spin. Flaming Fox bets can be adjusted by selecting the stake amount to the left of the screen and sliding the bar until you find the bet you want to use. Its as easy as that with this game but be sure you keep track on your balance and amend your bet accordingly.

Wild Symbol – With Flaming Fox your wild symbol is a mass of swirls and the word ‘wild’ emblazoned across them. It will substitute for all other symbols except the bonus spins scatter symbol. As well as this it is also your highest paying symbol, only offering a win value if you land 5 wilds on a pay line. If you manage this, then you will be awarded a x500 multiplier on your line bet amount. 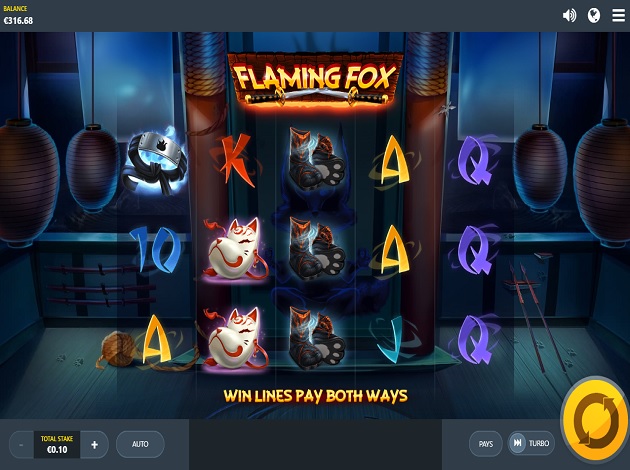 Flaming Fox Feature – At any point during the base or bonus game, the fox character will leap onto the reels to award the player with some extra helping hand symbols. This is entirely at random but can replace either single symbols or entire reels. The replacement symbol will be in flames and will contain only high value symbols or wilds!

Bonus Spins Feature – Land three or more of the fox scatter symbol to trigger the bonus spins round. The spins allocated are at random and before the round begins you will see the fox karate kick a box and add a number of spins to the total. The more scatters you landed at the point of triggering the feature, the more spins you have a chance of winning. Once your spins have been tallied up you will begin the round. The flaming fox feature is active here also but once it is triggered it becomes locked and just keeps adding special symbols to your reels throughout the round! You can’t retrigger the spins from within the round, but you do have an extra spins symbol active and if it lands it will award more spins to your total.

We have a soft spot for the main character in this slot, Mr Fox as we’ve named him. He high kicks and karate chops his way around the slot, trying his best to bring those big wins for you. Red Tiger Gaming have excelled themselves with the simplicity of this game, the design and the animations. As a complete package it really works, and the wins of course help. That Flaming Fox feature triggers often in the base game and really helps secure those wins. As for the bonus spins round, that can be very rewarding if you get a higher amount of spins allocated in the beginning of the feature. If not, you need to hope for that locked Flaming Fox feature to trigger to make the best of it.