Vampires are a genre that may seem over done, but there is always a new story to uncover and talk about. Iron Dog Studios have designed one such story for you to play and it is an interesting one at that. All hail the Blood Queen and the undead realm that she rules over. Are you brave enough to take your chances against the queen and try to win her riches? 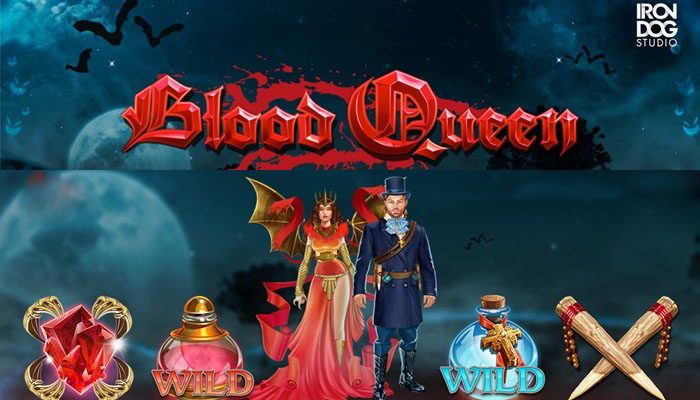 Play Blood Queen on any of these top casino sites;

Blood Queen is a 5-reel, 30 fixed pay line slot that offers a frighteningly good RTP of 96.06% for all the victims, ahem, we mean players! Ominous looking gates laden with skeletons are set either side of the transparent reels, with a backing soundtrack to add to the dark feeling. Higher value symbols are the Blood Queen, Van Helsing, blood red gems, an ugly vampire and a set of stakes. Lower value symbols are formed with A, K, Q and J and all are designed to look like ornate brooches of some sort.

Bet Amounts – Betting begins at just 30p per spin and can be increased to the maximum of £45 per spin, making Blood Queen very affordable. Change those bet amounts by hitting the pile of coins to the left of the reels and sliding the scale till it suits your needs.

Wild Symbol – A scary gargoyle makes up your wild symbol and it will substitute for all other symbols except the scatter. It will only appear on the top row of all reels and forms part of an interesting mini feature too.

Scatter Symbol – To trigger the bonus feature you need to land three or more of the scatter symbol, which is depicted by a heart with a couple inside it. Three, four or Five of these symbols anywhere in view will trigger the feature which will be explained below. 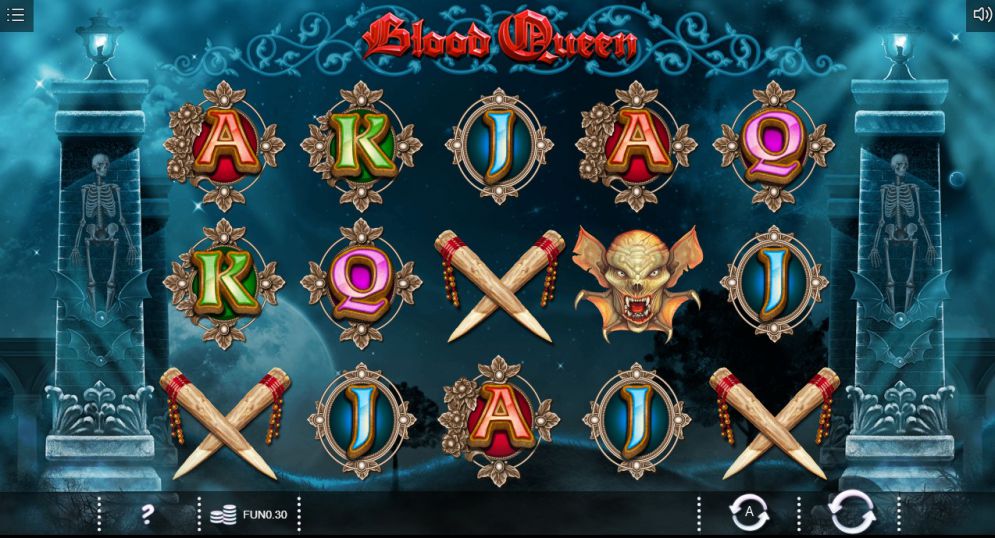 Wild Gargoyle Feature – Whilst the gargoyle wild will only appear on the top row, there is nothing to fear from that. Usually a wild is needed across the reels to help form wins, so when we first saw that it lands only on the top row we did wonder. When the wild lands atop the reels it will then expand to fill the whole reel and completing any potential wins as it does so. This will mean more, and bigger potential wins so watch out for his face appearing.

Bonus Spins Feature – Having landed three or more of the heart scatter symbols you will trigger the bonus spins feature.

But it doesn’t stop there as once you have had your spins allocated to you, you will then be given the choice of two spin options:

Iron Dog Studios has created a cracker of a game with Blood Queen, fast paced, fun and lots of spooky things happening to keep your interest. Lots of smaller wins occur in the base game and that expanding wild came to our rescue more than once thankfully. Shame the same can’t be said for the bonus spins. It did fall in place once or twice, but it took its sweet time doing so. Once we had it in our grasp though we were able to try out both spin options. We have to say for us we much preferred the blood queen potion feature but check it out for yourself and see how you feel.