Do you love the thrill of the funfair stalls? Does the thought of bagging an oversized stuffed toy fill you with cheer? Then you are going to be so excited to play this next slot, complete with flashing lights and moving ducks along the bottom of the screen. Double Up Ducks is an exciting game from the Playtech vaults and it’s sure to bring back some great childhood memories of the funfair. 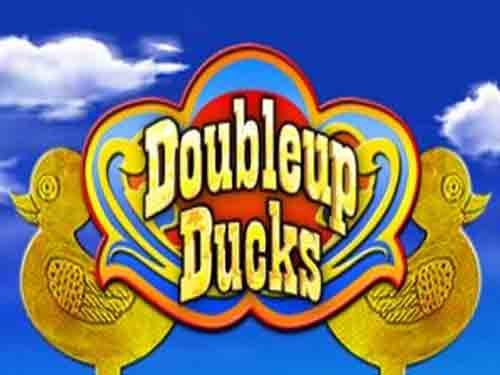 Play Double up Ducks on any of these top casino sites;

Double Up Ducks is a 5-reel, 25 pay line slot offering players an RTP of 95.49%. The reels are set to look as if they are a fairground shooting stall, with a line of ducks constantly moving along the bottom of the screen. Occasionally you will hear a pellet gun fire and one of the ducks will fall down, which is interesting to the eye but has no effect on the game itself.

In keeping with the theme, the symbols are all things you would find on a fairground, from stuffed toys to balloons. Higher values are represented by ride tickets, a giraffe, a duck, a lion and a hippo; which sounds like the opening line of a very bad joke. Lower values are represented by a turtle, lollipops, a monkey, a panda, the inevitable fun fair goldfish and some balloons. We would have loved to have had some music playing along, but sadly there is none here. Just some basic slot sounds as the reels spin, which is a shame as some fairground music would have given more enjoyment to the game.

Bet Amounts – Betting begins at 1p per line in play and can be increased up to 50p per line in play. This means your spins cost from 1p per spin up to just £12.50 per spin, making Double Up Ducks one of the more affordable games about. You can amend the lines you have activate and the amount per line in play, in order to adjust your bet. Just click on the symbols that say change bet or change lines and use the up or down arrows, then away you go.

Wild Symbol – A pink elephant is your wild symbol in Double Up Ducks, and it will substitute for all other symbols except the scatter. Any wins that the wild helps to form will be awarded a x2 multiplier. Not only that but it is the highest paying symbol in the game too. Land x5 pink elephants on an active pay line to win x9500 your bet amount as a win. 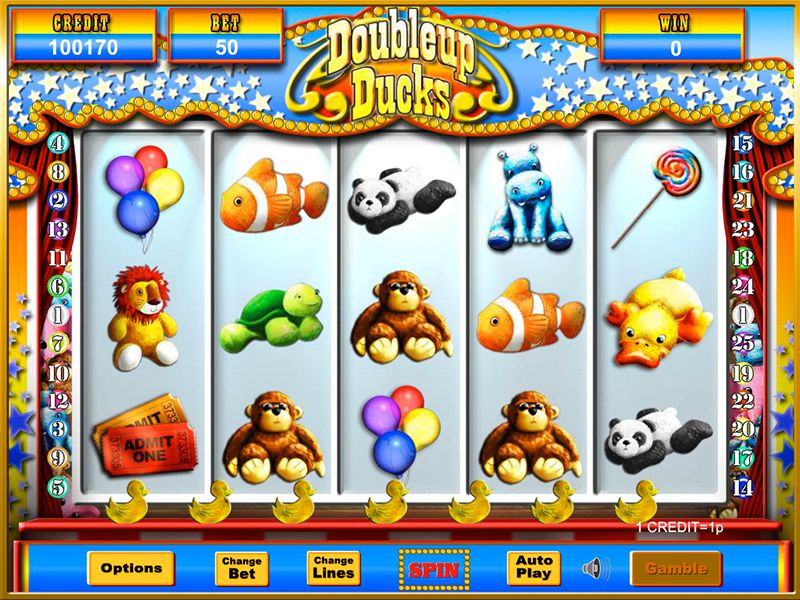 Scatter Symbol – Your scatter symbol on Double Up Ducks is a duck with a target behind it, just like you would find in the shooting alley. Land three or more of the duck shoot scatter anywhere in view to trigger the bonus spins feature. But, land anywhere from 2 to 5 scatters on the reels to be allocated a scatter win on top of your line win.

Bonus Spins Feature – Having landed three or more of the duck shoot scatter symbol anywhere on the reels, you will now be taken to the bonus spins round. An allocation of 15 bonus spins is now awarded and a x3 multiplier on every win too. The bonus spins round can be retriggered up to a maximum of 15 times in the same round. Meaning players have the chance of bagging up to 225 spins in total.

Gamble Feature – If you feel you need to step things up a little bit on Double Up Ducks, then step right up to the big red gamble button. Well, not quite, but if this was a fairground, that’s probably what you would get. On each winning spin you can choose to gamble it and take the chance to double that win. On the next screen there is a face down card with a red and a black duck on either side of it. Choose the red or the black duck, then if the card turns over and matches your choice you win. If you have won, then you can choose to gamble again and this can occur up to 5 times. If you decided to bank what you win, then hit the button that says take win and you will be returned to the game. Guess incorrectly at any point and you will lose everything and will be returned to the main game.

Double Up Ducks is a quaint looking game, but still lots of fun to play. The major downside for us was how long it took for the bonus feature to trigger. However due to the low cost to spinning those reels, it means it’s not going to break the bank whilst you wait for it to happen. Once it does, there is huge win potential within the round with wins being awarded a x3 multiplier. Main game wins happen fairly often as well, which also helps beat the boredom whilst you are waiting for those scatters to land. Playtech has given Double Up Ducks a pretty basic setup and it’s almost retro in style, but it works well and makes the game extremely playable.