Being left in the snowy wastelands with only wolves and other such animals for company isn’t normally our cup of tea. But, we are making an exception for this next slot, Wolf Ridge. Created by IGT, it has an icy back drop and is filled with twists and turns to keep players intrigued from the minute they start spinning those reels. 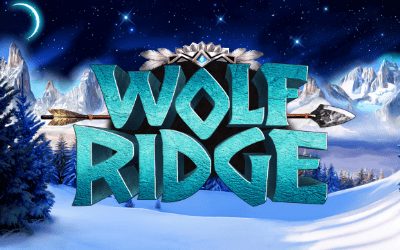 Play Wolf Ridge on any of these top casino sites;

Wolf Ridge is a 5-reel, 30 fixed pay line slot offering any wolf lovers out there a variable RTP of 92.11% to 96.05%. Behind the reels is a snow laden mountain scene complete with the aurora borealis flickering away above. Set inside an icy block, the reels are packed full of animals and gemstone shapes. Higher values symbols include a wolf, ram, snow leopard and raccoon, with lower value symbols being gem stones in the shape of a heart, club, diamond, spade and a circle. As the game is in play there’s an almost magical sounding track that lifts the spirit, whilst equally making you feel calm all at once. Unfortunately, this serenity is shattered when the bonus symbol lands and the sounds is shattered by the howls of the wolves Alpha.

Bet Amounts – Betting on Wolf Ridge begins at 50p per spin and can be increased to the immense value of £1000 per spin. Amend the bet by simply clicking on the plus and minus symbols on either side of the bet amount. Once you are happy it is just a case of hitting spin and getting on with your game.

Wild Symbol – A native American shield made of wood and material with the word wild emblazoned across the front, makes up your games wild symbol. It will only appear on reels 2, 3 and/or 4, and it will substitute for all other symbols except the scatter.

Bonus Symbol – Your bonus symbol on Wolf Ridge is the wolfs head, which emits a loud howl when it is landing on the reels. It appears on reels 1, 3 and 5 in the base game and on all reels in the bonus spins feature. It forms its own feature in conjunction with the prize wheel that is above the reels. Read on below to find out more about the wolf disk feature. 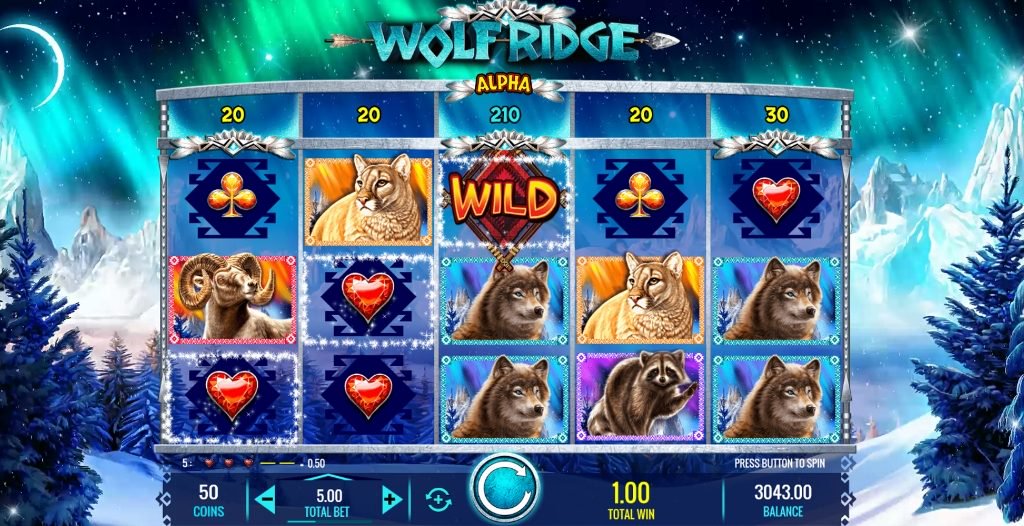 Wolf Disk Feature – When you begin to play Wolf Ridge you will notice that there is a separate reel that sits atop of the main reels. It has bonus spin symbols on it and also numbers, these numbers are instant win awards. The prize wheel doesn’t really come into use until you land a bonus wolf symbol on the reels underneath. But when you do finally get a wolf on reels 1, 3 or 5 then you really are in for a big surprise. If a wolf bonus symbol lands and the reel it is on has an instant win amount in the prize wheel, then you will be immediately awarded that as a win. But it doesn’t end there, because the cash prize on the wheel will now be multiplied by x3 the amount shown. If it lands on a reel that has the bonus spins symbol above it, then you will go straight into the bonus spins feature.

Wolf Ridge is an epic place to visit but not one which we would like to stay though, as enticing as the aurora borealis is. Game wise IGT have created a compelling and enjoyable slot with some interesting intertwining features. The addition of the prize wheel above the reels gives the player a sense of anticipation and this creates intrigue. Waiting and watching to see when that wolf bonus symbol will drop and whether it will drop on a cash sum or the bonus spins is exciting to say the least. Its only downfall is that it takes such a long time to drop the bonus spins. But thankfully the main game wins come fast and that more than makes up for the wait.